Haifa Arabs find their voice in standing with Gaza

Haifa is witnessing a burgeoning Palestinian youth movement driven by solidarity with the Palestinians in Gaza. 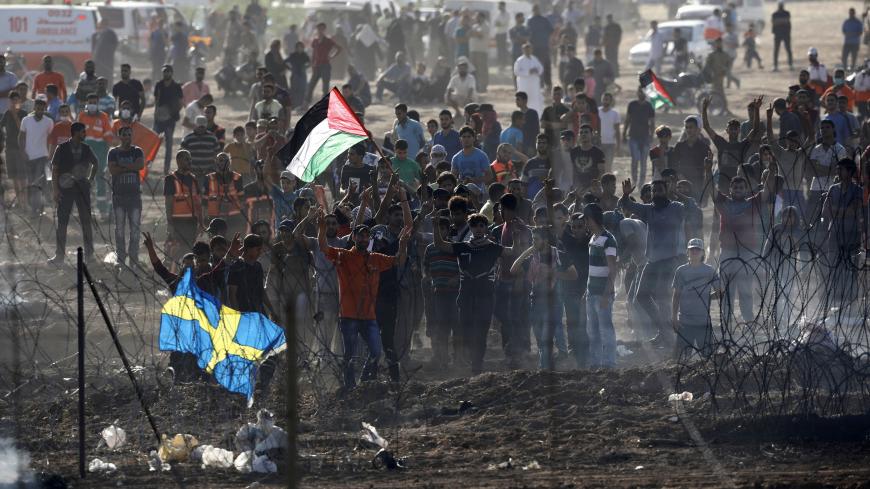 Palestinians protest on the Gaza side of the border between Israel and Gaza, June 8, 2018. - REUTERS/Amir Cohen

RAMALLAH, West Bank — Popular protests in the West Bank and Arab cities in Israel against the sanctions and siege imposed on Gaza have been ongoing in tandem with the Great Return March. On July 3, protests were held simultaneously in Gaza, Haifa and Maroun al-Ras in Lebanon, under the banner “Palestinian Women Call for Return and Breaking the Siege.”

Several demonstrations protesting the sanctions imposed on Gaza were held in June, including June 20 in Bethlehem and in Ramallah June 23 with the participation of youths from Israel. On June 13, activists from the West Bank and Israel, including from Haifa, participated in a large protest in central Ramallah that Palestinian security forces violently dispersed.

The Great Return March, which kicked off along Gaza’s border with Israel on March 30, Land Day, and is still ongoing, spawned a youth movement in Haifa that has mobilized Arab citizens from Arab cities and towns to protest the siege on Gaza.

In Haifa on June 8 on Ben Gurion Boulevard, artists participated in “Gaza All the Way, Until the Day of Return.” On June 1, hundreds had gathered for “From Haifa to Gaza: United by Blood and a Shared Destiny,” a demonstration held at Basel al-Araj Square on Ben Gurion Boulevard. One earlier protest of note, held May 18, was dispersed by Israeli police, who clashed with protesters and controversially arrested 21 people.

Majed Kayyal is active in the so-called Haifa movement. “Our activities are ongoing and increasing,” he told Al-Monitor. “We are being oppressed by the Israeli police. They are attacking us, arresting us and dragging us into interrogations. Yet our youths insist on taking to the streets until the siege on the Gaza Strip is lifted.”

Kayyal believes the importance of the protest movement lies in how it embodies national unity between Palestinians in Israel and Gaza as well as the West Bank. “We are not simply marching in solidarity with Gaza,” he said. “We are connected to Gaza through unity of destiny, shared futures and common struggle. This is why the significance of our movement lies in its rejection of the division of the Palestinian people and proves that we are one people, and we have the same goals of freedom and political ambitions.”

The activists and youths driving the movement are affiliated with a variety of parties, forces, institutions and associations active in Israel. It is an independent movement, without an official party affiliation, Kayyal explained. Members involved in the movement coordinate among themselves in addition to engaging other institutions and parties. “All those taking part in our movement share the same principles and believe in the same demands we are raising, such as lifting the siege on Gaza and the right of return for all Palestinian refugees,” Kayyal said.

The movement has created hope of changing the political dynamics in Israel through its ability to mobilize hundreds of demonstrators pushing for adoption of a political discourse that includes resistance to the Israeli occupation. Some hope that in getting large numbers of people to turn out for demonstrations, it will embarrass the political parties into taking action.

Kayyal agreed in part with this perspective. “The movement should not shame anyone,” he said. “Rather, it should push for change [instead of] the same political discourse that parties have adopted for years and years, especially since political parties have the ability to develop their political and national discourse.”

At the same time, Kayyal stressed that the protest movement is in no way an alternative to Arab political parties. “The movement is not aimed at creating a conflict with any Palestinian political party, as it includes all segments of society.”

Haneen Zoabi, an Arab member of the Israeli Knesset for Balad, told Al-Monitor why she considers the youth movement in Haifa vital. “Gaza is part of the homeland,” she said. “We have embraced and joined the Gazan struggle, because it is not only against the siege but also for the right of return.”

Zoabi further explained, “The political vision of the youth movement is in line with some parties and out of sync with others, but it embodies the political diversity that exists within the Palestinian arena, so we participate in the activities of the protest movement and completely support its independence.”

In terms of the movement's future, she said, “As an effective political entity, the movement has been able to attract the younger generation that parties have failed to. If the protest movement carries on with the same persistence, it surely can improve in the future and have a bigger influence.”

As for how Israel might react, Zoabi remarked, “Israeli oppression would raise the street’s ire even further and make people realize how crucial it is to reject the occupation, as well as prompt the youth who cannot be bothered with politics to join the protests if only to fight Israeli repression.”

Alif Sabbagh, a political analyst for Al-Mayadeen, commented to Al-Monitor on the movement in Haifa being young and nonpartisan, noting that its activities are increasing and becoming more organized.

He pointed to the possibility of the movement expanding to other locations, saying, “If youth groups are organized in other cities, we may see the birth of a new movement, but they need to put in the work and get properly organized.”

Sabbagh noted, “[The Haifa movement has] gained momentum thanks to the large number of Arab students at the University of Haifa who helped organize large demonstrations on different occasions.”

The protest movement in Haifa has succeeded in creating an atmosphere of national belonging in the city, especially among young people and students. As the marches for return continue in Gaza, the youth movement leaders are certain that their activities in Haifa will also continue and their political and national role will grow.