The Greek Orthodox community in Palestine and Jordan is in open revolt against Patriarch Theophilos III over the sale of church lands to Israel and Israelis. 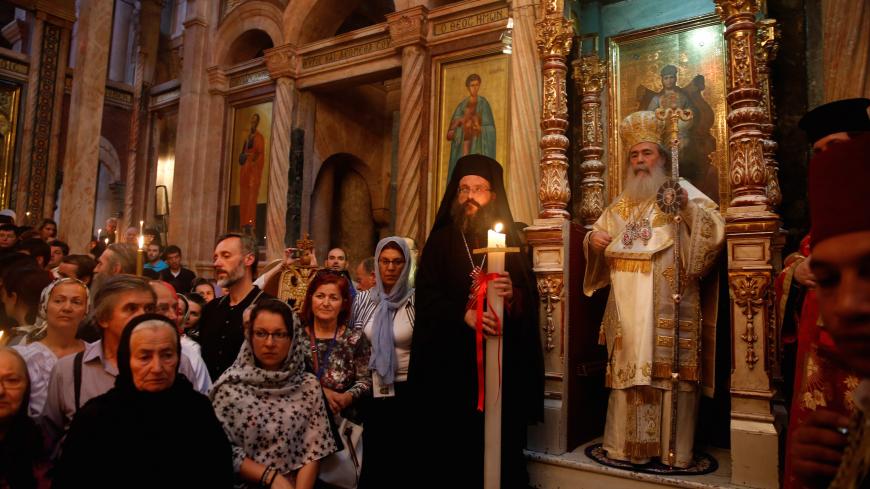 RAMALLAH, West Bank — The relationship between Patriarch Theophilos III of Jerusalem and All Palestine and the Greek Orthodox community in the Palestinian territories and Jordan is closer than ever to escalating into all-out war. Theophilos, who assumed leadership of the church in 2005, has presided over the church while a number of deals have been reached to sell or lease church property to Israel, private Israeli citizens and investors. The patriarch is responsible for the management of all church endowments as stipulated by Jordanian Law no. 27 (1958). The church owns property in the West Bank, including East Jerusalem, Gaza and in Israel. Fed-up members of the Greek Orthodox community have organized in opposition to Theophilos in an attempt to remove him and encourage Jordanian and Palestinian authorities to withdraw their recognition of him.

Haaretz reported on Oct. 13 that six dunams of land with dozens of businesses on it around the clock tower in Jaffa as well as 430 dunams in Caesarea, including large parts of the Caesarea National Park and Amphitheater and a Roman amphitheater, were sold to anonymous foreign companies. The land in Caesarea was being leased to Israel, which was not notified of the sale. This followed a deal to sell 500 dunams of land in the Talbiya and Rehavia neighborhoods in West Jerusalem. Previous deals were reached in East Jerusalem and the West Bank, including for land near the Mar Elias Monastery, in Bethlehem.

The opposition movement — spearheaded by the Arab Central Orthodox Council and Arab Orthodox Youth — received a significant boost with the participation of Palestinian and Jordanian political factions and figures in the one-day National Conference to Support the Arab-Orthodox Cause in Palestine. The more than 200 attendees confirmed their opposition to the patriarchate being represented by Theophilos and called for his dismissal and trial for his role in selling church lands. The conference, held in Bethlehem on Oct. 1, included participation by Mahmoud al-Aloul, Fatah vice president and Central Committee member; Mustafa al-Barghouti, secretary-general of the Palestinian National Initiative; Qais Abdul Karim, deputy secretary-general of the Democratic Front for the Liberation of Palestine (DFLP); and a number of leaders from the Popular Front for the Liberation of Palestine (PFLP).

The conference concluded with participants issuing 14 decisions and recommendations, including “considering the Greek Orthodox case a strategic national issue of the Palestine Liberation Organization (PLO), akin to the issues of Jerusalem and refugees” and “withdrawing the recognition of the patriarch as a first step toward removing him from his position, holding him accountable, refusing him participation in any religious ceremony and considering him and his followers outsiders to the national equation.” The conference formed a committee consisting of 17 members from Jordanian and Palestinian political factions, the Greek Orthodox Council, and the Greek Orthodox Youth Movement to follow up on conference decisions at the political, judicial and popular levels.

Alif Sabbagh, spokesperson for the National Conference and the Greek Orthodox opposition movement, told Al-Monitor, “The conference is the first of its kind. It has succeeded in mustering Palestinian and Jordanian forces to support the Greek Orthodox movement and add the issue of church properties to the PLO’s agenda because it is considered of national rather than religious importance.”

Aghlab Khoury, an activist with Greek Orthodox Youth, told Al-Monitor, “This conference mainly aimed at withdrawing the patriarch's popular legitimacy and regarding him as persona non grata based on Palestinian and Jordanian national sentiments. Another important outcome is calling on Jordanian and Palestinian authorities to withdraw official recognition from Patriarch Theophilos III and engaging with Greek Orthodox institutions around the world to expose him.” In an Oct. 4 press release, the Lebanese Orthodox Council, led by Robert al-Abiad, expressed its “solidarity with and support for all decisions and recommendations issued by the National Conference.” The council also condemned “the sale of the holy land trodden by Jesus Christ.”

Khoury further noted, “The committee emerging from this conference has the mission to arrange a visit with Palestinian Authority President Mahmoud Abbas and King Abdullah II of Jordan in order to communicate to them all the decisions of the conference and to request them to withdraw confidence from the patriarch.” Meanwhile, the Greek Orthodox opposition movement will lobby to pressure Palestinian and Jordanian political leaders into fulfilling conference demands.

Khoury noted, “The coming period will witness intense movement to hold meetings and symposiums with local institutions so that they offer their support to boycotting the patriarch and pressuring political authorities into answering the popular demand of removing him from his position.”

After participating in the conference, the DFLP's Abd al-Karim told Al-Monitor, “The [opposition] movement is no longer restricted to the Orthodox sect since the church’s property does not exclusively belong to this sect, but is part of a bigger national cause to preserve [Palestinian] ownership of land.” He added, “The conference’s recommendation of not working with the patriarch and its requests that the relevant authorities, namely Palestine and Jordan, withdraw their recognition of the patriarch will be added to the agenda of the PLO’s Executive Committee. The committee will study these points and consult with Jordan in order to issue a common decision that can be executed.”

The Greek Orthodox opposition movement has already filed a complaint with PA Attorney General Ahmad Barrak to hold Theophilos legally accountable. Law no. 27 stipulates the patriarch’s management of the church properties, but does not mention a patriarch’s right to sell or lease church lands. According to Sabbagh, the complaint, signed by 309 people and submitted Aug. 30, requests that Barrak investigate Theophilos for his involvement in diverting church land to Israelis. He added, “We will also file a complaint against the patriarch with the Jordanian attorney general, and we will raise the issues of the patriarch’s lack of transparency in managing church land and his administrative and financial corruption.”

The Greek Orthodox opposition is planning to reinforce the above activities by organizing marches and protests against Theophilos. Such events will run up to Christmas and intensify during the holidays, at which time protesters will attempt to obstruct his entering churches on the West Bank and in Israel.

The movement held its first protest on Oct. 8 in the Arab village of Reineh in Israel. Christian and political figures, including Knesset member Jamal Zahalka, participated in the demonstration, as did political activists from the Balad (National Democratic Assembly), the Islamic Movement and the PFLP. The demonstrators sought to block the patriarch from entering a church in the village that day. The Israeli army intervened to ensure his safety.

“The field movement against the patriarch shall continue and reach its peak over Christmas as we will not allow the patriarch to set foot in the Church of the Nativity,” said Sabbagh. “We will raise the Palestinian flag over the Church of the Nativity and Greek Orthodox churches under Palestinian sovereignty instead of the Greek flags.” Sabbagh also remarked, “In the previous Christmas celebrations, we allowed the patriarch inside the church after President Abbas interfered, but this year, we will not accept any intervention. As an Orthodox sect supported by Palestinian forces, we will ban the patriarch from entering the church.”