Arab Orthodox youths in the Greek Orthodox Patriarchate of Jerusalem are accusing ruling Greek monks of selling church land to Israel and discriminating against the Arab Christian flock. 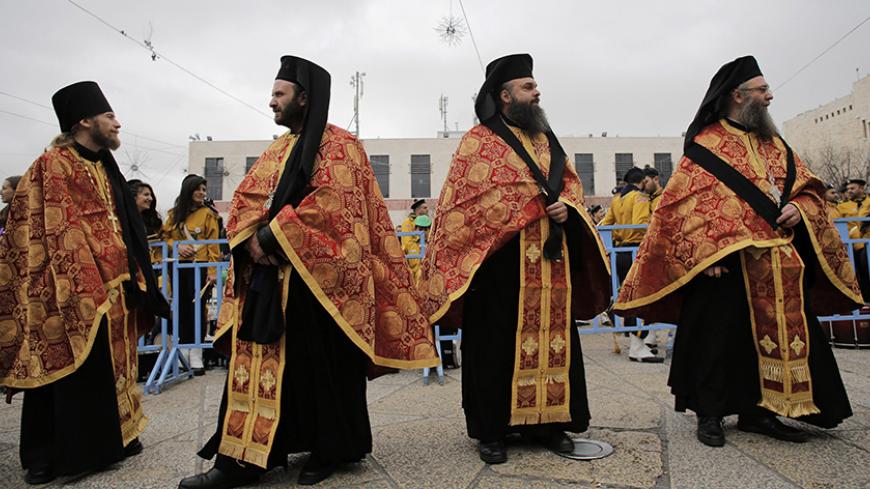 Members of the Greek Orthodox clergy wait for the arrival of Jerusalem Patriarch Theophilos III before the Eastern Orthodox Christmas procession outside the Church of the Nativity in Bethlehem, Jan. 6, 2015. - REUTERS/Ammar Awad

On Dec. 27, the executive committee of the Arab Central Orthodox Council in Palestine and Jordan began a campaign against the patriarch, coinciding with his participation in Christmas celebrations. A number of protesters raised banners that read “unworthy” during sit-ins and marches organized in Bethlehem on Jan. 6 and posted “Theophilos is unworthy” on social networking sites.

Movement organizers accuse the patriarch of “diverting church lands to Israel and making unfair decisions against Arab monks,” the latest being the removal from office of Archimandrite Christophoros and the reduction of the salaries of Archbishop Atallah Hanna and Archimandrite Meletios Basal.

Protesting Arab Orthodox youths in Jordan and Palestine issued a Dec. 16 statement describing the decision as “uncanonical and taken by an unqualified synod,” adding, “Theophilos is not the legitimate patriarch of the Church of Jerusalem. He is unworthy of trust and neither he nor his synod represents us or represents the Arab Orthodox flock in Jordan and Palestine.”

The patriarch's leasing of 71 dunums (16 acres) of land belonging to the Saint Elias Monastery south of Jerusalem to an Israeli company raised the ire of the Orthodox community in Palestine when the deal became public in 2009. In a press conference attended by Al-Monitor on Jan. 5, Central Orthodox Council member Uday Bajali described the move as serving the settlers’ interests, saying, “This deal will besiege the village of Beit Safafa and will allow the expansion of settlements in Jabal Abu Ghneim, Gilo, Givat Hamatos and Kibbutz Ramat Rachel.” Bajali accused the patriarch of “colluding with Israel to divert lands without any oversight,” adding, “Unworthy is he who sells property to Israel, does not serve his flock and contributes to displacing our youths.”

But Hanna Omeira, the head of the Presidential Higher Committee for Church Affairs, told Al-Monitor, “As per legal procedures, the [Palestinian] Authority is keeping abreast of news about the diversion of land in Jaffa Gate and the areas around St. Elias. The latest row against the patriarch was caused by his decision to dismiss Father Christophoros; a decision that we asked the church not to implement, while bolstering coordination with the Jordanian government to study and find solutions to all contentious issues.”

According to organizers, the Orthodox movement aims to fulfill their fathers’ battle to rid the patriarchate of “Greek occupation.”

An official from the Central Orthodox Council who wished to remain anonymous told Al-Monitor, “The movement in Palestine and Jordan aims to ultimately and completely restore the Orthodox Church to Arab control, following Greek hegemony thereon since 1534. We must put an end to the racism practiced by the patriarchate against Arabs since the former was taken over by the Greeks 500 years ago, and reform it in a manner that guarantees Arab participation in the management of its affairs and the decision-making process therein.”

According to the Central Orthodox Council, Greek monk Germanos, who headed the patriarchate after the Greek takeover of the latter in 1543, in the 47 years of his rule dismissed all Arab monks from the patriarchate in collaboration with the political authorities involving bribery.

Alif Sabbagh, a member of the Central Orthodox Council in Israel, told Al-Monitor, “The Orthodox movement is methodical and based on a specific future outlook, as part of a long-term strategic plan to reform the Orthodox Church and restore its Arab flock’s right to manage its affairs.”

Asked about the next steps, Sabbagh said, “In the coming period, we will be forced to resort to Israeli courts and submit a complaint against the patriarchate, particularly after Jordanian authorities forsook their responsibilities. We will also intensify field work to expose the patriarch’s transgressions.”

Omeira affirmed that the Palestinian Authority (PA) stood against the Arabization of the church, since this issue is tied to national independence, although it supported demands for the appointment of Arab clergy to senior church positions. He noted, “The PA is against any schisms occurring within the Orthodox Patriarchate and is working on opening channels of dialogue between the church and its opponents, aimed at reaching solutions amenable to all.”

Hanna Issa, a professor of international law at Al-Quds University, attributed the rejection of Arabization to Israel’s classification of Palestinian territories as “disputed territories,” which would encourage it to seize church lands if they were Arabized and cleared of their Greek inhabitants.

The Central Orthodox Council is asking the Palestinian and Jordanian leadership to put an end to the hegemony of Greek monks over the patriarchate and proactively work toward adopting the ongoing movement’s stance against the Greek Patriarchate in order to reform it.

Sabbagh said, “Those who are surreptitiously giving land to the Israelis must not have the support of any political, national or individual authority.”

Sabbagh added that the Palestinian and Jordanian authorities were capable of restoring Arab control over the Orthodox Church, as, by virtue of the 1958 law, any appointed patriarch must be issued a Jordanian passport, though the Jordanian authorities can withhold and revoke his citizenship. He affirmed that the Palestinian political leadership played an important role in backing the patriarch against Arab church members. He added that the PA was cooperating with the patriarch against its Arab congregation.

But Omeira denied these assertions and said that the PA was seeking to bridge the chasm through dialogue. He added that the church did not submit reports to the PA pertaining to its actions, but that there was an agreement by which the church “shall not take steps toward the leasing of land within the borders of the state of Palestine.”

The prevailing signs seem to indicate that voices of dissent inside the Orthodox Church will only grow louder as long as the Greek Patriarchate refuses to listen to their demands. In the meantime, protesters will continue to call Theophilus “unworthy” until he is removed from office.