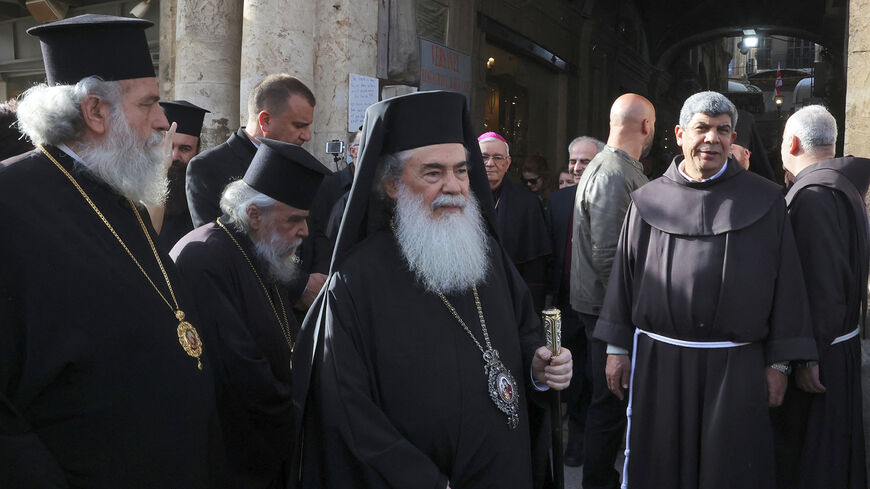 Greek Orthodox Patriarch of Jerusalem Theophilos III (C) arrives for a meeting with other religious leaders at the Petra Hotel at the Jaffa Gate area, Old City of Jerusalem, March 29, 2022. - Hazem Bader/AFP via Getty Images

GAZA CITY, Gaza Strip — After 17 years of litigation and legal battles, the Israeli Supreme Court rejected June 8 an appeal by the Greek Orthodox Patriarchate against the settler organization Ateret Cohanim’s takeover of the church’s property in the Bab al-Khalil (also known as Jaffa) area in Jerusalem.

The case goes back to 2004 when Ateret Cohanim seeking to judaize East Jerusalem, notably the Old City, obtained long-term protected rental rights to three properties, including the Imperial and Petra hotels, located in the city’s Muslim Quarter where all Palestinians live.

Ateret Cohanim — which, like other extremist organizations, has resorted to the Absentee Property law, brokers and illegal methods to takeover properties in Jerusalem — claims that it had bought the three properties from the Patriarchate during the time of former Patriarch Irenaios.

However, the current Patriarch Theophilos III says that the process was marred by a lot of fraud and manipulation.

The recent court decision means that the Bab al-Khalil area — which serves as a facade of Old Jerusalem from the side of the Bab al-Khalil Gate (Gate of Hebron) and the main entrance of the Church of the Holy Sepulchre, and which is home to the most significant monasteries of Jerusalem and the historical pilgrims’ route to it, notably the Christian Quarter — will be owned by Ateret Cohanim, which will settle hundreds of people there and alter the nature of the Arab Christian Quarter, where about 300 settlers live.

Asaad Mazawi, lawyer of the Orthodox Church in Jerusalem, told Al-Monitor that the deal was signed in violation of the regulations of the Patriarchate, whereby any deal necessitates a personal approval from the patriarch and the synod.

“When I obtained new evidence proving that these deals were fraudulent, I filed the case,” he said.

He believes that the court’s recent decision reflects the approach of Israeli official institutions in supporting the actions of extremist right-wing organizations seeking to alter the reality of Jerusalem with the expropriation of Christian properties.

“The disputed area is surrounded by churches and monasteries. By planting outposts inside Arab neighborhoods, the Israeli authorities are dispossessing the area from its official owners,” Mazawi said.

He added, “The Israeli authorities are stifling Christians even on their holidays, as evidenced by the attack that took place on the last Holy Saturday in the Church of the Holy Sepulchre in the Old City of Jerusalem.”

Dimitri Diliani, head of the National Christian Coalition in the Holy Land, told Al-Monitor, “There is a great and real danger to the Christian heritage in Jerusalem as a result of this unjust politicized decision, in addition to the flagrant violation against Christians and the Muslim-Christian identity in the occupied Arab city of Jerusalem.”

He called on Palestinian tenants to remain steadfast against the settlers who are seeking to have access to their properties.

The European Union and the heads of missions of the EU countries in Jerusalem and Ramallah stressed in a joint statement June 10 that the Israeli court’s decision increases pressure on the Christians in the city, allowing settlers to threaten them and their properties.

The statement added that the settlers’ attempts to seize Christian properties in the Old City of Jerusalem must be stopped, as they pose a threat to the Christian heritage and traditions.

Archimandrite Father Abdullah Yulio of the Melkite Greek Catholic Patriarchal Dependent Territory of Jerusalem told Al-Monitor, “It is well known that during religious ceremonies, the patriarchs’ processions start from Bab al-Khalil,” considering that the court’s decision is part of the suffering of Palestinian Christians in Jerusalem under the “Israeli occupation.”

“The main problem is the occupation itself, which aims, by displacing Arab Christians, to paint the conflict as a religious one,” he noted.

Yulio concluded, “The settlers work under the protection of the army in all the cities of Palestine, and their associations are intensively active in East Jerusalem in vigorous attempts to judaize the city. We, Christians, are part of this nation, and we hope that we will not leave our homes and churches.”