In Jerusalem, secret sale of church land to developers revealed

Arabs in the Greek Orthodox Patriarchate of Jerusalem are calling for the church to remove Patriarch Theophilos III from office for selling church-owned land in West Jerusalem to Israeli developers, but there is no sign their voices will be heard. 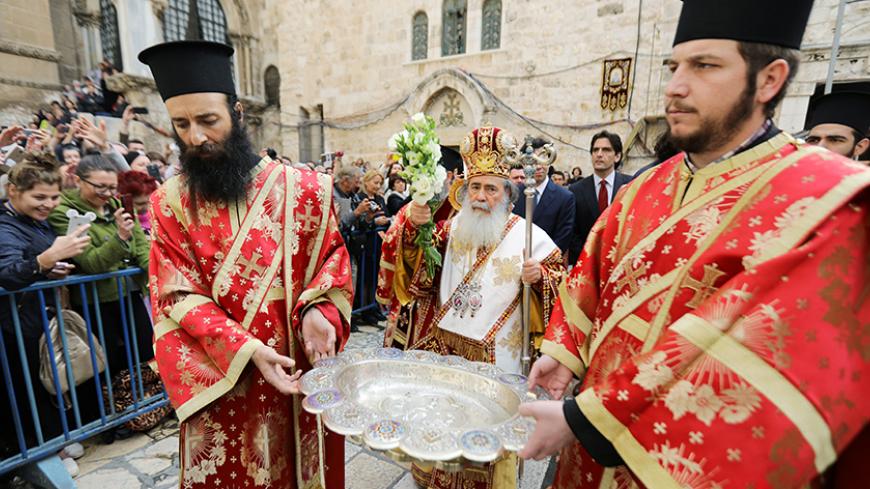 The leading Israeli financial newspaper Calcalist revealed the story June 27, though the sale quietly took place in August 2016. The deal is sparking controversy within official and nonofficial Orthodox groups in Palestine and Jordan, and stoking worry among the 1,500 households whose subleases will expire in about 30 years. The church in the 1950s granted a 99-year lease to the Jewish National Fund. Typically, such leases on church-owned property are renewed, and the people who subleased the property, along with their families, had expected to remain there.

The secret deal came to light after the church filed a complaint with the District Court of Jerusalem against the Israeli municipality, seeking documents proving the church is no longer bound to pay taxes to the municipality when ownership is transferred.

In a July 3 meeting, 14 local Orthodox institutions agreed to stop all forms of dialogue with Theophilos III and the synod, and to form a mini-secretariat to follow up on all protest actions and popular movements, calling for withholding Palestinian and Jordanian recognition of Theophilos III.

The Greek Orthodox Patriarchate is subject to the provisions of Jordanian law, which regulates relations between the patriarchate and members of the church in both Palestine and Jordan. Under Jordanian law, the patriarch is entrusted with the church’s properties and lands and is not allowed to sell them. This means Jordan could pressure Theophilos and go as far as revoking his citizenship, since, upon inauguration, patriarchs become holders of Jordanian passports.

However, since his inauguration as the head of the Orthodox church in 2005, Theophilos III has been associated with several deals, selling or leasing the church’s lands to Israel without being officially challenged, despite protests and campaigns by Orthodox groups.

This indicates that Theophilos III is supported by the Palestinian Authority (PA), Jordan and Israel, Alif al-Sabbagh, a member of the Arab Central Orthodox Council in Palestine and Jordan, told Al-Monitor.

Sabbagh said Theophilos III was inaugurated after former Patriarch Irenaios was dismissed in 2005 for allegedly selling real estate to Israel; a Palestinian investigation committee formed by the PA at that time acquitted Irenaios of that accusation.

The recent deal prompted the Arab Central Orthodox Council to call upon Jordanian and Palestinian authorities June 30 to remove Theophilos and ban him and his synod from visiting Palestinian and Jordanian lands. These demands were submitted to the Higher Presidential Committee of Churches' Affairs in Palestine, which convened July 3.

Committee Chairman Hanna Amira told Al-Monitor the committee advised that the demands be submitted to PA President Mahmoud Abbas, and recommended that legal and professional experts examine the deal's details.

Though the Palestinian government denounced the deal July 2, critics were not convinced that anything would change. Sabbagh told Al-Monitor that Palestinian and Jordanian leaders need to end the dominance of Greek monks over the patriarchate. He noted that those “who divert lands to the Israeli authorities” — a jab at the patriarchate — should not be supported by any authority.

“The Palestinian and Jordanian authorities had approved the dismissal of Patriarch Irenaios based on false accusations that he was diverting lands in the Bab al-Khalil area. Theophilos, however, is signing deals one after another [despite] well-documented proof of that presented to the PA, and [he has] yet to be removed from office,” Sabbagh said.

“Theophilos has unmatched Israeli and American support,” he said, referring to apparent American and Israeli pressure on the Palestinian and Jordanian authorities to keep the patriarch in his position.

The Jordanian parliament, however, did take some action. On July 6, 112 Jordanian parliamentarians signed a memorandum, which was handed to parliamentary speaker Atef Tarawneh, calling on Prime Minister Hani al-Mulki to “summon Theophilos to Amman in order to put an end to his actions and that of his synod, after he let go of more than 500 dunams of the church-owned land.”

Furthermore, 40 Jordanian parliamentarians issued a joint statement July 2 calling on the Jordanian and Palestinian governments to intervene to cancel Theophilos’ deals, which they described as “contempt of the Christian Orthodox church in Jerusalem.”

Amira denied any PA favoritism of Theophilos, saying, "PA relations with all churches are the same. There is no favoritism whatsoever. However, calls and demands for having high-ranking Arab monks in the church instead of Greek monks who occupy the patriarchate, or to [remove] Theophilos III, remain far-fetched. But these church issues could be reviewed in order to improve things.”

Khalil al-Tafkji, mapping department director at the Arab Studies Society in Jerusalem, told Al-Monitor, “The [August] deal is not the first deal struck by the Orthodox church with Israel. However, this deal is priceless because the lands are located in the most important and best neighborhoods in the city of Jerusalem.”