Palestinians take to the streets to protest discrimination

Arab citizens of Israel are joining hands with Palestinians in the West Bank and Jerusalem, holding marches in protest of Israeli discrimination and violence as nervous Israeli forces are careful to avoid inflaming the situation further. 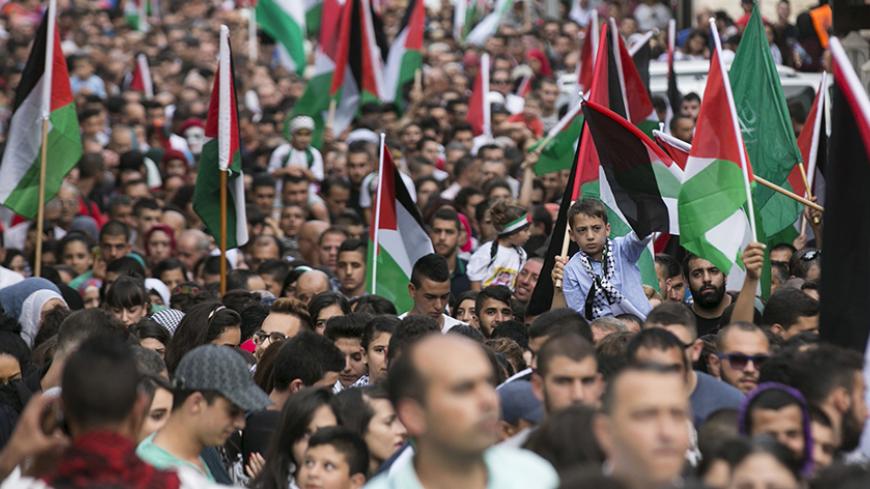 RAMALLAH, West Bank — On the morning of Oct. 13, a mass strike brought cities and towns in the Palestinian territories to a halt. Various sectors including local municipalities and public educational institutions joined the strike to protest Israel’s escalation in the West Bank and Jerusalem since the beginning of October 2015.

Throngs of an estimated 40,000 Palestinians took to the streets in the town of Sakhnin in response to a call by the High Follow-up Committee for Arab Citizens in Israel in support of the uprising in the West Bank and Jerusalem.

Although the events in Jerusalem and the West Bank were the main triggers that pushed the Palestinians to protest, the uprising was also instigated by an array of other reasons, including the continued Israeli government campaigns of incitement, hatred and racism.

Arab ​Knesset member Basel Ghattas told Al-Monitor that the movement represented by the mass strike and the protest in Sakhnin “reveals the state of public wrath and tension caused by the Judaization of Jerusalem, the assault on Al-Aqsa Mosque, the increasing manifestations of racism and hatred between Jews and Arabs and the constant incitement by [Prime Minister] Benjamin Netanyahu and the government’s right-wing parties against Arabs.”

For her part, Arab Knesset member Haneen Zoabi told Al-Monitor, “The Palestinians in the 1948 territories are part of the Israeli-Palestinian conflict, in light of their close association with Al-Aqsa Mosque, and therefore protesting against Israeli policies is in line with the legitimacy of the people's struggle guaranteed by virtue of the provisions of international law.”

Writer and political analyst Alif Sabbagh told Al-Monitor, “The 1948 territories events are a spontaneous uprising and reaction against the settlement surge in Jerusalem, the continued killing of Palestinians and attempt to subjugate them to military rule in order to impose the settlers’ will on Al-Aqsa Mosque and divide this mosque according to historical and site-related considerations.”

Sabbagh added, “The Arab citizens of Israel are not demanding the expulsion of the Israeli forces from Haifa and Jaffa. They are protesting the Israeli measures in Jerusalem and requesting their civil rights in Israel, which will only be obtained following the establishment of a Palestinian state in the 1967 borders. Otherwise, Palestinians will remain in the eyes of the Israeli establishment a security enemy subject to the policies of racial discrimination and incitement.”

He explained, “The Palestinians in the 1948 territories are frustrated by their failure to obtain their civil rights from an extremist right-wing government led by Netanyahu. They are subject to discrimination in terms of services and civil rights and treated as second-class citizens. This frustration is reflected on the ground through protests and confrontations as well as tension and anger toward the Israeli policy in Jerusalem.”

The confrontations and protests flaring up since early October bring to mind the events of October 2000 that ended in 13 Arab protesters being shot dead by Israeli police following protests condemning Israeli Prime Minister Ariel Sharon’s visit to Al-Aqsa Mosque. In the current escalating tensions, some believe these events are likely to be repeated.

Ghattas said, “We are in the midst of an unfinished battle. We do not know where and how things will evolve. It all depends on the actions of the Israeli government and security establishment. The current situation is likely to continue and escalate in light of the tension, congestion and anger felt among Palestinians determined to keep staging protests.”

He added, “While suppressing protests by means including large arrest campaigns targeting young Palestinians, the Israeli police forces are making sure not to kill anyone since they learned their lesson from the October 2000 events. However, there are no guarantees; the situation may deteriorate and victims may fall, leading to a new October uprising.”

For his part, Sabbagh said, “The Netanyahu-led government’s action and the Palestinian reaction will determine whether the October 2000 events will be repeated and whether there will be more victims. If Israel resorts to snipers — as it did back in 2000 — the Palestinians’ reactions will no longer be limited to protests, especially since there are mixed cities that witnessed large protests for the first time, such as the cities of Ramla and Lod. This could lead to an uprising on a national level.”

Majd Kayyal, an activist in the youth movement in the Palestinian territories, told Al-Monitor, “Israel is maintaining the same murder- and crime-based policy, while its hostile perception toward Palestinians has not changed. Over the past two weeks, violent confrontations erupted with the police as more than 100 young men were arrested and others were injured. However, the Israeli police did not dare to attack the Sakhnin march, realizing that such a move would have catastrophic repercussions.”

Zoabi ruled out the possibility of the October 2000 events recurring. “The current circumstances are different from those of 2000. Palestinians are not staging an intifada or mass protests, as was the case in 2000. We want this public anger to be invested on the political level and we do not want Palestinian blood to be shed in vain.”

Zoabi attacked the Palestinian Authority, saying, “No political gains can be achieved in the absence of a political will and a political decision by the PA, which must be able to reap what was sown with Palestinian blood and exert pressure on Israel. However, the PA is foolish for counting on security coordination with Israel as the only solution for survival.”

The Arab citizens of Israel seek to play a political role to make up for the absence of a unified national leadership in Jerusalem. “Jerusalem is out of the PA’s control. While a unified national leadership could be formed from the parties, the PA chose to interpret the situation on the ground from a position of weakness by maintaining its security coordination with Israel,” Zoabi noted.

She indicated that the political vacuum in Jerusalem and the absence of a unified leadership in the city pushed the political currents in the Palestinian territories to declare their positions from a standpoint of preserving the national interest and to break the siege over the city. “This is in line with our main battle to regain our civil rights,” she said.