It is difficult to determine whether the events in the Palestinian territories are a limited and temporary uprising or a full-blown intifada. 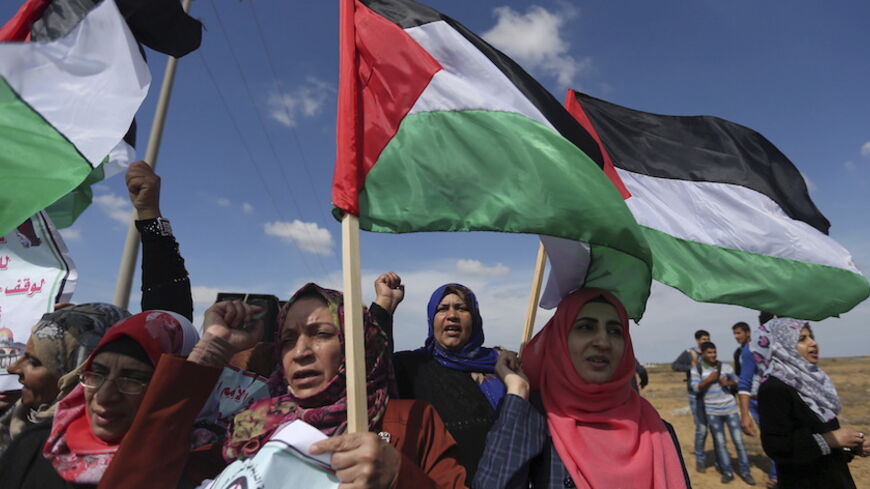 Demonstrators wave Palestinian flags during a protest near the border between Israel and the southern Gaza Strip, Oct. 28, 2015. - REUTERS/Ibraheem Abu Mustafa

GAZA CITY, Gaza Strip — The Palestinians have yet to agree whether the daily confrontations against the Israeli military are a popular uprising that may end at any moment, or a third Palestinian movement that has already started and will continue for years like the first intifada (1987-1993) and the second intifada (2000- 2006).

Since the end of the second intifada, clashes between Palestinians and the Israeli military continued sporadically in the Palestinian territories occupied in 1967. However, since Oct. 1, the Palestinian unrest has quickly flared up and spread to wider Palestinian areas in the West Bank, Jerusalem, the Gaza Strip and Palestinian cities and towns in the 1948 territories.

According to a statement issued on Oct. 26 by the Palestinian Ministry of Health, 59 Palestinians including 14 children and a pregnant woman have been killed so far.

Hamas leader Nazih Abu Aoun told Al-Monitor, “The form of the current Palestinian revolt is not important as long as it keeps growing into a full-blown and real Palestinian intifada.” He added, “The Palestinians’ means to defend themselves during this intifada are gradually evolving. Palestinians started throwing stones, then stabbing, running over and shooting Israeli soldiers, and we do not know how things will evolve.”

Abu Aoun explained that the escalation of Israeli violations against Palestinians — such as raiding and destroying houses, conducting daily arrest campaigns and razing lands — and the high level of violence by settlers against Palestinians, as well as increasing Jewish incursions into Al-Aqsa Mosque, all contributed to the ongoing unrest.

For his part, Amin Makboul, secretary-general of Fatah's Revolutionary Council, told Al-Monitor, “We are currently unable to judge whether this revolt is a limited and temporary popular uprising, or whether it represents the harbingers of a full-blown Palestinian intifada. The Palestinian people, who rose up against Israel despite the absence of a decision by any Palestinian faction, will be the judge of that.”

Makboul believes that what is happening now “is much like the first signs of the first and second intifadas, including continued Israeli aggression, growing Palestinian anger, continuous international neglect and lack of Arab attention to the Palestinian cause due to the ongoing conflicts in the Arab countries.”

Islamic Jihad leader Ahmad al-Mdallal believes this Palestinian popular deployment on several confrontation lines in the West Bank and Gaza Strip and the intensified clashes with the Israeli military are contributing substantially to turning the current events into a full-blown intifada.

Mdallal told Al-Monitor, “Palestinians had no other option but to rise up. Our people witnessed 20 consecutive years of unproductive and futile negotiations with Israel, and are today witnessing a real Israeli plan to divide Al-Aqsa Mosque in time and space between worshiping Jews and Muslims. This is totally unacceptable.”

Writer and political analyst Talal Okal told Al-Monitor, “I think we are facing a limited popular uprising and what is happening now is a warning to Israel to avoid a full-blown intifada. The ongoing confrontations are waged by some Palestinian pioneers and not by the entire people, and yet they have had impressive repercussions on Israel. What will be their impact if they expand into a full-blown intifada?”

He explained that the current popular uprising is facing impediments that the first and second Palestinian intifadas had not encountered, saying, “This uprising ignited in light of the existence of the Palestinian Authority, which undermines the armed resistance. This impediment did not exist during the first intifada. This is in addition to the internal Palestinian division, which kills all attempts and initiatives of national mobilization against Israel, also an impediment that did not exist during the second intifada.”

According to Abdul Rahman Shehab, director of the Atlas Center for Israeli Studies, the current events are taking the form of a popular uprising trying to make its way into a full-blown intifada by escalating daily confrontations with Israel.

Shehab told Al-Monitor, “The Palestinians are not eager about a full-blown intifada. They are trying to learn from the previous two intifadas, by preventing any drift toward a full-blown intifada that lacks specific objectives. Therefore, we see that the protesters today are from among the new young generation while the elderly and middle-aged groups, who have lived through the previous two intifadas, are reluctant to embark on a new intifada before determining its inclination and the stance of the Palestinian political system.”

It is worth mentioning that the Israeli Cabinet had announced on Oct. 13 that it was taking aggressive steps to restore calm in the West Bank, Jerusalem and the Gaza Strip. Israel implemented these repressive measures to stop the stabbing and vehicular attacks, most notably the demolition of the homes of the perpetrators of these operations.

In this context, political analyst Hassan Abdo asserted that these measures will not stop the current Palestinian revolt. He told Al-Monitor, “Israel tried everything against Palestinians, including the demolition of homes, deportation and murder, but all this was in vain and only created more hatred and violence.”

He added, "Israel failed to control the Palestinian revolt by taking repressive and tight security measures, since this is a popular and unsystematic uprising. The stabbing and running-over operations against Israelis are individual operations that are not subject to a decision by the Palestinian organizations."

Abdo pointed out that the national consensus tacitly supporting this Palestinian revolt has turned it into a strong movement unbreakable by the Israeli measures. He said, “In an unprecedented position, the PA did not stop these events as it usually has done, but rather remained silent and allowed the people to express their anger.”

In light of these impediments facing the current Palestinian revolt, an important question arises regarding the lifespan of this intifada. Okal believes this revolt will continue as long as it is embraced by the Palestinian factions. He said, “This uprising will grow into a popular full-blown uprising and will continue until the achievement of its objectives, most notably the end of the occupation."

According to Makboul, some objectives have indeed been achieved, most notably restoring the attention of the Arab League, the United Nations and the United States to the Palestinian cause. The Arab League held an emergency meeting Oct. 13 to discuss the Palestinian situation, while UN Secretary General Ban Ki-moon visited Ramallah Oct. 21. US Secretary of State John Kerry met with Palestinian President Mahmoud Abbas Oct. 24 in Amman.

However, Makboul agrees with Okal that the final objective, to end the occupation and establish a Palestinian state with Jerusalem as its capital, won't be so easy to accomplish.