Who's afraid of the 'intifada'?

The use of the expression ''wave of terror,'' rather than ''intifada,'' has created the illusion that the recent violence against Israelis will pass without the need for tangible measures to relieve the despair felt by young Palestinians. 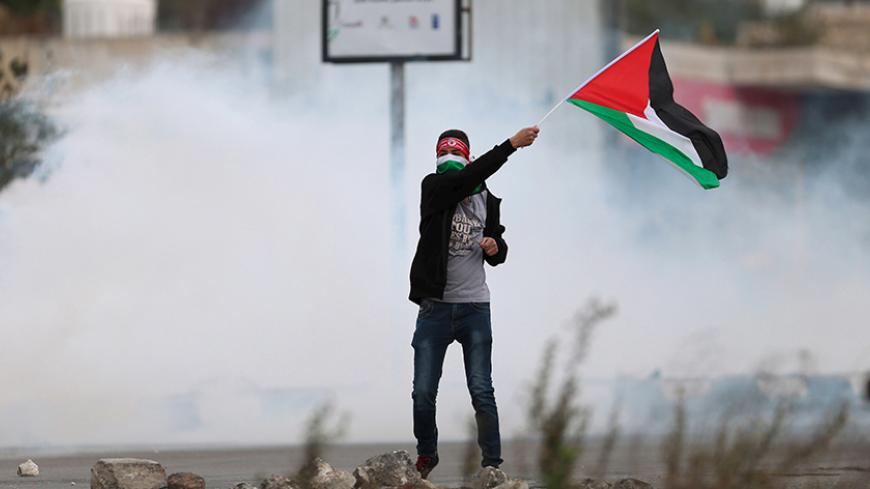 A protester waves a Palestinian flag in front of tear gas fired by Israeli troops during clashes at Hawara checkpoint near the West Bank city of Nablus, Nov. 28, 2015.

The first week of December marks two full months since the outbreak of violence in Israel on Oct. 1. During this time, dozens of attacks have been recorded, occasionally two or three a day. To date, 21 Israelis have been killed in addition to one Eritrean and about 100 Palestinians.

Addressing military correspondents on Nov. 25, a senior Israel Defense Forces (IDF) officer said that the uprising might very well expand. According to him, on average there are about 15 flash points on weekdays and about 40 total during weekends. Additionally, the number of demonstrators can run as high as 200,000. Yet, the IDF refuses to call the events of the past two months an intifada, or uprising.

The use of the expressions “intifada” and “wave of terror” is not merely a matter of terminology or semantics. Defining the event is important because it is essential for ascertaining the most suitable and most effective tools for combating and curbing incidents. If one is talking about an intifada, then much greater and more elaborate resources would be needed than would be the case for the type of limited military response required to stop a “wave of assailants.”

“Wave of terror” — the term the Israeli defense establishment has been using since early October and which has since been revised to a “limited uprising” — is misleading. It makes people, including those in Israel’s political establishment, think that the “wave” will blow over, so no decisions of any real substance are needed to make it go away. Indeed, the operational measures taken to date to counter this so-called wave of terror have been reactionary and limited. They consist of demolishing the homes of attackers, combating incitement, setting up roadblocks and beefing up troops, mainly in East Jerusalem and Hebron, and a few other tactics.

An intifada, by contrast, is an uprising that essentially involves all of Palestinian society. Extraordinary measures — military, diplomatic and both — are called for in combating it. The first intifada (1987-1991) officially ended in 1993 with the signing of the Oslo Accord and the handshake on the White House lawn between Prime Minister Yitzhak Rabin and PLO Chairman Yasser Arafat. The second intifada (2000-2005) petered out and ended following a series of military and diplomatic measures, including the targeted assassinations of Hamas’ political leaders and Israel’s withdrawal from the Gaza Strip in 2005.

To understand what Palestinian society in the West Bank is presently experiencing — Gaza is a whole different ball game — and to develop an operational or diplomatic response to the third intifada, Israel must first call a spade a spade. We are not talking about a wave of terror perpetrated by a handful of young Palestinians “infecting” each other with violence. Rather, this is a much deeper phenomenon. The current intifada has enthralled most young Palestinians in the territories. They are not afraid of actively participating in it even in the absence of a guiding hand.

A colleague in the West Bank speaking on condition of anonymity said that this intifada, as opposed to the previous ones and especially the second one, which included armed militants, deserves to be called “an uprising.” “This is the first time,” my colleague argued, “that you Israelis are seeing young disheartened Palestinians who are genuinely rising up. This is not about brainwashing or organizations and armed cells that have different interests and objectives. This is an unadulterated uprising.”

According to him, it is incorrect to call the perpetrators terrorists. “What are terrorists?” he asked before replying himself. “A terrorist is someone who is a member of a terrorist organization that sends him to carry out an attack on behalf of the organization and its cause. But in this intifada, almost all the young people are lone wolves acting out of despair. What kind of terrorists are those who have no past and who also have no future?”

This is probably the reason why the Israeli army has had a hard time grasping the deterioration in security as a full-blown intifada. After all, the intensity of the attacks is lower compared to the suicide bombers who blew themselves up on buses during the second intifada. Even the number of demonstrators in clashes with the IDF is markedly less compared to the two previous intifadas. The large organizations — Hamas, which spearheaded the second intifada, and Fatah — are not taking part in events. Yet, this is insufficient for arguing that what is happening is a transient wave. Quite the contrary. The number of assailants today has surpassed all the suicide bombers of the second intifada. On Nov. 27, three attacks were logged on the same day.

The IDF has learned its lesson from the two previous intifadas, coming to the realization that restraint and a proportionate and reasonable response to events are the required military approach. The IDF has also learned, albeit belatedly, that this intifada, although still not called such, is an outcome of the grim reality in the territories. This is why the army has recommended to the political echelon that it improve the economic situation of the Palestinian Authority (PA) to diminish the feelings of despair and frustration among young people, thereby perhaps reducing their motivation to mount attacks. One way to achieve this objective is to grant Palestinians more permits to work in Israel.

The IDF’s most far-reaching recommendation to the political echelon has been to provide the PA with guns and ammunition to deal with future challenges. The IDF fully realizes that the current situation could lead to anarchy in the PA-controlled territories. This is not some imaginary horror scenario, but is based on the lessons learned from the previous uprisings. Palestinian organizations such as Hamas are still straddling the fence, but who can say how long that will last?

Will the IDF's recommendations be adopted by the political establishment? Will Prime Minister Benjamin Netanyahu’s government choose not to crank up the pressure on the PA to avert further escalation? It's highly doubtful. All one need to do is listen to the proposals by Netanyahu’s ministers: a military operation similar to 2002's Operation Defensive Shield, closure on the territories and economic sanctions against the PA. These are only some of the proposals that have been published.

Israel’s defense and political establishments speak two different languages, and oddly enough, the tables have reversed. The political establishment wants to apply a heavy-handed policy and strike back, while the army proposes greater leniency in response to the uprising. The IDF understands that given the characteristics of the new intifada, a military operation like Operation Defensive Shield will not quash the motivation of dispirited young Palestinians.

The IDF, however, is also to blame in part for the ineptness of the political echelon. By initially proclaiming recent events as a transient wave of terror, it gave the political establishment an excuse to simply set up roadblocks, beef up troops and abstain from taking major tangible decisions. Perhaps things would be different if the defense minister, chief of staff or director of military intelligence had told the premier and his ministers, “This is an uprising, an intifada, and there is no effective military response. Please decide what you would like to do.”