IDF killing of Palestinians on Nakba Day a warning

The failure of diplomatic negotiations undermines the Palestinians' motivation to maintain security coordination with the IDF, as was the case in the shooting at the Bitunia checkpoint, where two Palestinians were killed. 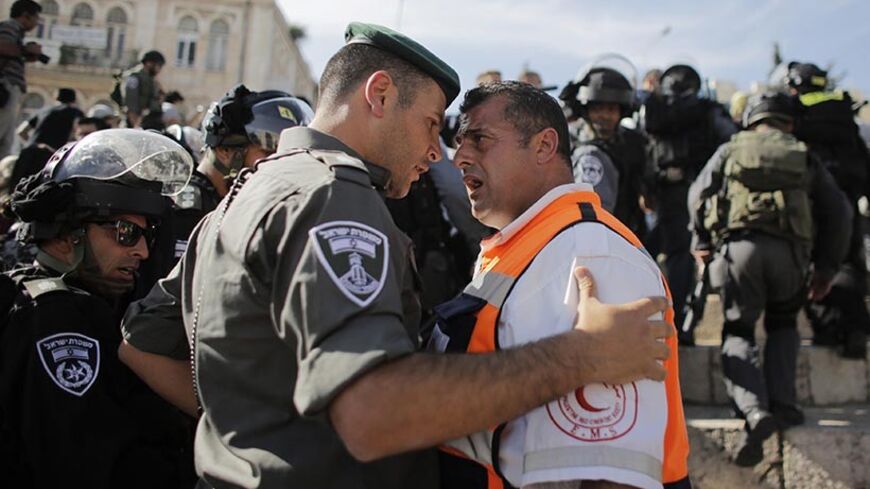 A Palestinian medic argues with an Israeli border policeman in Jerusalem during a demonstration marking the 66th anniversary of "Nakba," meaning catastrophe, May 15, 2014. - REUTERS/Ammar Awad

Tensions in the occupied territories are on the rise. Two young Palestinians — Mohammad Abu al-Taher, 22, and Nadim Nuwara, 17 — were killed near the Bitunia checkpoint during the Nakba Day protests May 15. According to Palestinian sources, they were shot with live ammunition during clashes with Israeli troops. On the face of it, this is yet another incident reflecting the stormy, restless atmosphere in the Palestinian Authority (PA). The reasons for this unrest have often been explained in recent months: frustration, unemployment, lack of diplomatic horizon, weakening of the Palestinian security apparatus and so on.

Yet, the Nakba Day incident in Bitunia should not be viewed as just another bloody incident, but rather as a warning signal. When analyzing the conduct of the Palestinian security forces before and during the clashes in which the two young men were killed, it appears that the PA's capacity to control violent events — which was very successful in the past — is now highly doubtful.

These demonstrations, dubbed “popular protests,” although most are organized by various groups in the occupied territories, have become commonplace in recent months. Many young people regularly show up on Fridays at the Hawara, Kalandia or Bitunia checkpoints, and even at the Ram roadblock on the edge of Jerusalem, and clash with Israeli soldiers.

The Israel Defense Forces (IDF) checkpoints have always constituted sensitive and dangerous points of friction. But since the waning of the second intifada, and the growing power of the effectively trained Palestinian security forces, the PA’s police have had a key role in "keeping the flames of protest" under reasonable control.

The beefed-up Palestinian security forces provided a buffer between IDF soldiers at the checkpoints and the young protesters. They used force to block them when it appeared that their demonstration was about to spin out of control and might result in casualties among the Palestinians.

It's very easy to draw young people to these protests nowadays. They are quick to respond to any call to show up, and the number of participants in the protests — which have become routine on Fridays — is constantly increasing. But numerous and more complex and sensitive incidents than the commemoration of Nakba Day have ended in the past at the very same points of friction without loss of life.

During IDF operations in the Gaza Strip — Cast Lead in 2008-2009 and Pillar of Defense in 2012 — Palestinian security forces prevented protest preparations at an early stage; and over the past year, especially during the talks between the Israelis and the Palestinians, they managed to completely control the extent of the demonstrations. This was true of protests in support of prisoner releases by Israel as well as protests against the settlements and “price tag” attacks by right-wing Israeli activists in the occupied territories.

More so: every demonstration was coordinated in advance between Palestinian and Israeli defense forces to prevent an escalation of violence. The term “letting off steam” is often used in the security discussions among the IDF, the Israeli Civil Administration and the Palestinian security forces. In other words, residents of the occupied territories are allowed to protest and express anger, as long as the demonstrations remain under control. This is the best that both sides can make of the situation, preferring that the Palestinians "blow off steam" rather than join local armed resistance groups, in which many young people in the occupied territories also participate.

Today’s protesters, mostly teenagers, were children in the days of the second intifada. Most of them grew up in those years, but were not part of the uprising. This is the first protest experience for them, and it naturally spawns activists who become leaders of their generation. The number of young people joining the ranks of the popular protests grows as frustration and despair increase.

At this week’s Nakba Day events, about a month after the collapse of the diplomatic talks between Israelis and Palestinians, something unprecedented happened. The Palestinian security presence was sparse and unable to stop young Palestinians from clashing with IDF soldiers at the roadblock. The tragic result: two deaths and a growing rage in the occupied territories.

Palestinian President Mahmoud Abbas, for his part, is engaged in a last-minute battle over Palestinian public opinion. There are growing voices within the PA, including among members of the Fatah leadership — and not just among Abbas' opponents — claiming that the security cooperation with Israel equals treason.

Criticism over the security coordination has often been sounded in the past, but as long as the PA promised its residents that maintaining order, security and calm with Israel were clearly in the Palestinian interest, the criticism was muted and inconsequential. Now, after the failure of the talks and lack of diplomatic horizon, security coordination with Israel is being regarded as “collaboration.” There is virtually no harsher word of condemnation in the occupied territories.

In the eyes of many Palestinians, Israel routinely does not give a hoot about Abbas and humiliates him, while he turns the other cheek in submission. And thus, the security coordination exists, but initial cracks have started appearing in this effective "defensive shield."

According to a Palestinian source, no decision has been made at this point to reduce the extent or level of the security coordination with Israel. But motivation has been greatly eroded. Those enforcing law and order in the occupied territories — mostly the Preventive Security forces, comparable to Israel’s Shin Bet security agency — are frightened by the cries of “amil” (collaborator) that are heard more and more of late and directed toward them and their families. In the past, such name calling made no difference to them. Now, things are different. An explanation such as “Palestinian interest” no longer convinces the street of the necessity of cooperation with Israel on security issues.

Calm in the occupied territories has lasted for almost a decade. Israelis, who experienced a murderous intifada, tend to attribute this calm mostly to successful and effective intelligence work by the Shin Bet and preventive measures taken by the IDF over time. There is not much said about the role of the Palestinian security forces, including the security coordination, partly because the Palestinians themselves prefer to play down the issue.

A Palestinian security source told Al-Monitor that if the Israeli public had been aware of even 10% of the Palestinian activity in preventing terrorism and protecting Israelis over the years, and especially in more recent times, they would not have dared say there was no Palestinian partner for peace and security.

Anyone who thinks that the security coordination and the motivation of the Palestinian security services will last despite the loss of hope in the occupied territories about achieving a diplomatic arrangement is wrong.

The calm could be shattered at once. That is what happened when the Camp David talks between former Prime Minister Ehud Barak and PLO leader Yasser Arafat failed, and the second intifada broke out. It could happen again now. The cracks in Israeli-Palestinian cooperation are clearly evident on the ground. So are the results.