Attack on Israeli journalists might indicate shift to violence

The attack of two Israeli journalists in the West Bank town of Beitunia might indicate that despite the apparent lack of Palestinian interest in a surge of violence, a third intifada could erupt. 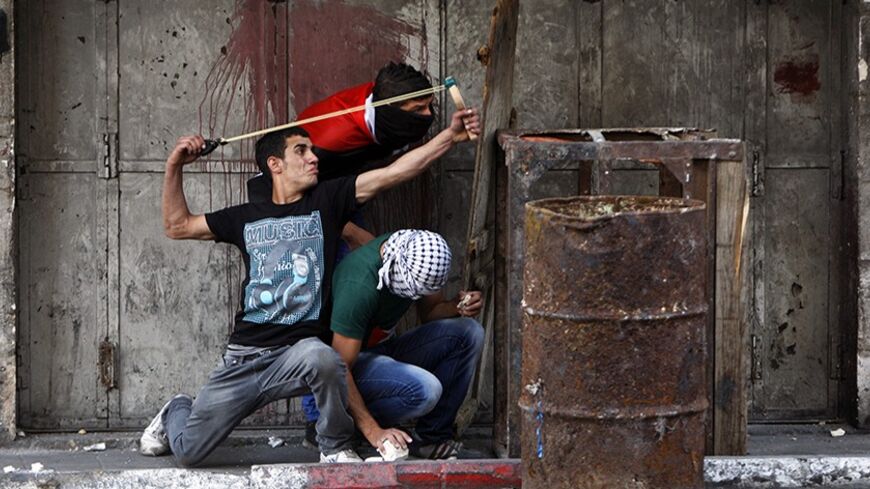 A Palestinian protester uses a sling to hurl a stone at Israeli troops during clashes following a rally to show solidarity with Palestinian prisoners held in Israeli jails, in the West Bank city of Hebron, May 16, 2014. - REUTERS/Mussa Qawasma

On Dec. 2, 1998, less than two years before the eruption of the second intifada, two Israelis were trapped by a raging Palestinian mob at the Ayosh intersection near the West Bank town of Ramallah. The two Israelis, traveling in a private car from Beit El settlement to Jerusalem, were Yehuda Oliva and soldier Assaf Miara, who hitched a ride with him.

The demonstrators, most of whom were Birzeit University students, hurled stones at the moving car from a distance of only a few meters. Oliva managed to escape but Miara remained trapped in his seat while the car continued its slow progress until it hit a wall and came to a halt. The demonstrators smashed the car windows and forcefully beat the soldier. Luckily, a restaurant owner from Ramallah protected Miara with his body and succeeded in spiriting him away, thus saving him from certain death.

The lynching attempt, which changed Miara’s life, served then as a milestone, marking the change of atmosphere in the occupied territories to Israel’s security heads — a change that later on led to the eruption of the second intifada. The catalysts for the eruption was the failure of the Camp David talks, and late Prime Minister Ariel Sharon’s ascent to the Temple Mount.

I am not very enthusiastic about warning of the possibility that a "third intifada" may erupt now. The two previous intifadas succeeded in taking the Israeli and local Palestinian leaderships by surprise, with regard to the timing as well as force involved. And this was despite the early signs that were evident in the field.

Senior Israeli security officials argue, in recent periodic assessments of the situation, that the second intifada is viewed by the current Palestinian leadership as a Palestinian failure because it did not yield any positive diplomatic results. Therefore, one cannot discern a significant interest on the part of the leadership to encourage another round of violent confrontation against Israel. Most of the Palestinian public, according to those evaluations, still bear the scars of the second intifada. Thus, it will be difficult to harness the Palestinian population to more bloody years.

However, we cannot ignore the fact that something is happening on the ground. These harbingers are viewed and described by Israeli journalists who cover the occupied territories. They sense a pre-war atmosphere.

On May 16, journalist Avi Issacharoff, correspondent for the Walla! News Internet site, and his crew were attacked by dozens of Palestinians, some of whom were veiled and armed, and who tried to lynch them.

“For quite a period now, we, Israeli journalists who cover the Palestinian arena, encounter more and more difficulties in being 'there,' in the West Bank, in the Palestinian cities. More and more threats are tossed around, there are more and more attempts of Palestinian citizens to drive us away from places where things are going on. But the new novelty of recent months is that as opposed to past years, something in the relationship between the journalists of the two sides has been broken,” wrote Issacharoff in the column he penned, in which he described the terrifying moments before he was extricated by the skin of his teeth at the hands of Palestinian security forces. All this took place during the funerals of the two Palestinians who were killed in the Nakba Day events in Beitunia.

There were other Israeli journalists covering the occupied territories who have experienced violent and wild attacks in recent months. For example, Channel 2 correspondent Ohad Chemo and his channel’s crew were attacked in Walaja while covering a funeral. They described the entrance into the territory of the Palestinian Authority (PA) these days as “Russian roulette.”

In December 2013, Israeli journalists covering the PA for different media outlets were rudely dismissed from Bethlehem when they came to document the Christmas celebration. The "dismissal" included shoving, cursing and spitting from those who had not long ago been their professional Palestinian colleagues. Palestinian journalists even imposed a ban on Israeli reporters in the West Bank territories, claiming that they, also, cannot travel freely in the State of Israel.

Numerous Palestinians, including different PA spokesmen who had worked very efficiently with the Israeli media in the past, witnessed the verbal attacks by Palestinian journalists against their Israeli colleagues. Nonetheless, none of them lifted a finger. They did not utter a word of condemnation, not even when the Israeli journalists were physically attacked and their lives were in danger.

In front of the eyes of the Israeli journalists in the occupied territories, a deep abyss now gapes in the Israeli-Palestinian relationship.

Today, Israeli correspondents in the occupied territories are, in effect, the only ones to come in direct contact with the Palestinian population in West Bank territories. This, following the severing of almost all the reconciliation bridges. The anger, fury and hatred directed at the journalists are a reliable barometer for the frame of mind in the West Bank. One that can be described by a term that had previously been reserved mainly for the Gaza Strip: a powder keg.

In the course of the bloodstained intifada years, Israeli journalists viewed the West Bank cities as relatively safe places for coverage. It was certainly safer when compared to the violent Gaza Strip.

The journalists working in the occupied territories, who brought situation reports of the West Bank to the Israeli media, enjoyed immunity that was backed by their Palestinian sources in the PA. They were very interested in offering the television viewers and newspaper consumers in Israel an up-to-date view of the situation.

During the intifada, there was no unfamiliarity or hostility between the Israeli media and the Palestinian population, the subject of their coverage. On the contrary, the Palestinians, who viewed themselves as victims, wanted to show the Israeli journalists — and through them, the Israeli public and the world public — their suffering and distress.

At the time, Israeli journalists met veiled and armed Palestinians, fighters in the military wings of Hamas, Fatah or Islamic Jihad, and came home safely without anyone daring to threaten their lives. Now they feel as if playing “Russian roulette,” which expresses the intensity of the fury and anger toward them by the West Bank residents, mainly after the failure of the talks.

Hopelessness, disappointment and desperation served as the fuel that ignited the second intifada after the failure of the Camp David talks. Today, it seems that fuel vapor encompasses once again the West Bank skies. One little spark can set it on fire.

All the detailed appraisals and analyses about mental fatigue and the assessment that the Palestinian leadership has neither any motivation, nor any interest, in initiating violent confrontations with Israel might turn out to be irrelevant in a flash. It would be interesting to see if any Israeli journalists in the occupied territories will be able to describe the final countdown — the one that the Palestinians are performing so loudly.