As Fatah starts its convention Nov. 29, Israeli intelligence sources warn that the Palestinian youth might turn their anger over the corrupt Palestinian political system to Israel. 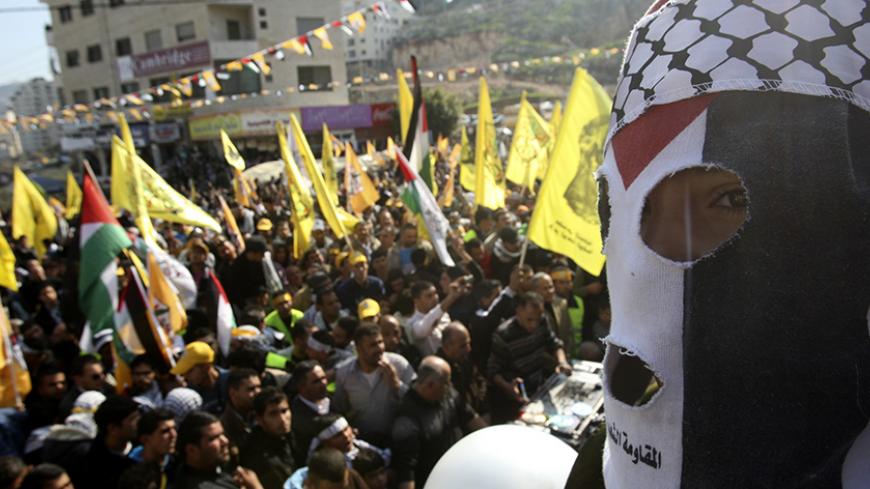 A Palestinian youth takes part in a rally marking the 48th anniversary of the founding of the Fatah movement in Nablus, West Bank, Jan. 3, 2013. - REUTERS/Abed Omar Qusini

The research departments of Israel's Military Intelligence (MI) and the Shin Bet, the internal security organization, are keeping close tabs on the Fatah convention in Ramallah that starts Nov. 29 — the anniversary of the day that the United Nations General Assembly approved the 1947 Partition Plan. Israeli interest is less directed at the political status of Palestinian President Mahmoud Abbas within his movement or the destructive power struggles between him and supporters of former Fatah leader Mohammed Dahlan. Instead, keen Israel interest is directed at possible ramifications of a weakened Abbas on Israel.

According to a report published in daily Haaretz, MI head Gen. Herzl Halevi issued a warning about the situation, in a closed-door conference at Tel Aviv University last week. Halevi said that power struggles in the Palestinian Authority (PA) may lead to a destabilization of the security situation in the West Bank in the coming year. In his estimation, power struggles between Fatah’s rival sectors will give Hamas great achievements on the ground. “The result will be a very challenging reality in Judea and Samaria,” Halevi said.

There is great dissatisfaction (kept under wraps) within Israel’s security system — mainly in the MI — at the fact that Israel’s political echelons did not exploit Abbas’ tenure to promote diplomatic processes. These could have pre-empted unknown threats that are now likely to appear after Abbas leaves the political stage.

True, the Fatah convention may not make the picture entirely clear or give credence to all the scenarios probed in Israel regarding the “Day after Abbas,” but one thing is clear to everyone: The Palestinian president used great cunning to organize the convention as a stage for his own political and diplomatic legacy.

On the political side, Abbas created a situation in which there is no room in the PA for his opponents, “Dahlan's band.” Concerning his diplomatic legacy, Abbas is making it clear that everything possible should be done to prevent a return to an armed Palestinian struggle. In his view, the objective is to use full strength to oppose the violation of civil order, a civil order that was built so laboriously after the conclusion of the second intifada in 2005. During this intifada, the operations of suicide terrorists against Israelis also threatened to take down the entire PA with them. According to Abbas’ associates, the president believes that the only thing justifying “[political] suicidal acts” is continuation of the diplomatic process that will bring about the end of the Israeli occupation in the territories — in reference to Abbas’ approach, for which he is paying a steep price in the popularity polls. Abbas’ target year for accomplishing this is 2017, the jubilee of the Israeli occupation since the 1967 Six-Day War. In accordance with this vision, in 2017, Abbas plans to declare the establishment of a Palestinian state, after which he will resign from public life.

From the internal Palestinian perspective, their great interest in the Fatah convention is connected to the “cleansing campaign” targeted at Dahlan’s supporters and the following question: Who were the blacklisted people, suspected of backing Dahlan, who were expelled from the movement? Another topic of Palestinian interest is the internal Fatah power struggles among the 1,400 existing delegates.

High-level Fatah officials who spoke to Al-Monitor admitted that they cannot point to a single strong power group within Fatah that could continue to rule the PA while preserving the existing public order and maintaining opposition to the Dahlan group. And as we know, the latter is only waiting for Abbas, whom they call the “Great Dictator,” to exit the political stage.

In a conversation with Al-Monitor, a Dahlan supporter, speaking on condition of anonymity, even claimed that none of Abbas’ people would be able to stop Dahlan from returning to the political scene. According to the source, this is true whether or not Abbas will try to transfer leadership in an organized way to one of his Fatah associates. In any case, he argued, Dahlan had already gained too much power to be undermined. “Dahlan’s charisma, his experience and mainly the pan-Arab support he has garnered in the course of his years of forced exile are what will grant him the presidency. There is no one else who has a fraction of Dahlan’s proven abilities, no leader with his eminence in the whole PA who will garner the confidence of the Palestinian public like Dahlan will,” he concluded.

Of course, these boasts were uttered by one of the close associates of the exiled leader. As far as Israel’s security apparatus is concerned, the chances are great that power struggles within the PA and the Fatah movement will lead to chaos in the PA and violent confrontations between the rival political sectors of the organization. And the result will be that violence will be directed also at Israeli targets.

“This is a well-known phenomenon as far back as the years we sat in [Israeli] prison,” a senior Fatah source told Al-Monitor on condition of anonymity. “When there were arguments between the Palestinian factions in Israeli prisons, ultimately we took out our anger on the prison wardens.” According to him, if there will be skirmishes between the Palestinian factions within the Fatah movement or outside it, the violence will not stop at the West Bank Qalandia or Hawara checkpoints.

All these statements closely connect to the words of Halevi at the Herzliya conference in June. At that time, Halevi addressed the recent terror wave and said that it represented a post-modern escalation in which the individual is at the center, not the organization. “What we see is more like anti-ideology as opposed to ideology,” he said. In this, Halevi insinuated that even the Israeli intelligence research departments have great difficulty in attempting to predict how Palestinian youths will translate into action their great loathing of the Palestinian political system. This system only becomes more and more labyrinthine and dysfunctional in front of their eyes, and no one knows how all this might affect their responses to Israel. Now, after more than a decade has passed since the conclusion of the second intifada and after almost 50 years of occupation, will the fury again be directed at the “prison wardens,” i.e., the Israelis?

It does seem that by the end of the Fatah convention we will know the answer to only one enigma out of many that plagues the Palestinians as well as the senior members of Israel’s security system: the extent and the strength of the power pole created by Abbas in order to challenge the gloomy forecasts for Palestinian society in 2017.