Dahlan-Abbas Reconciliation Not a Done Deal

Attempts to reconcile the two Fatah rivals have so far failed, and have instead prompted internal Fatah bickering. 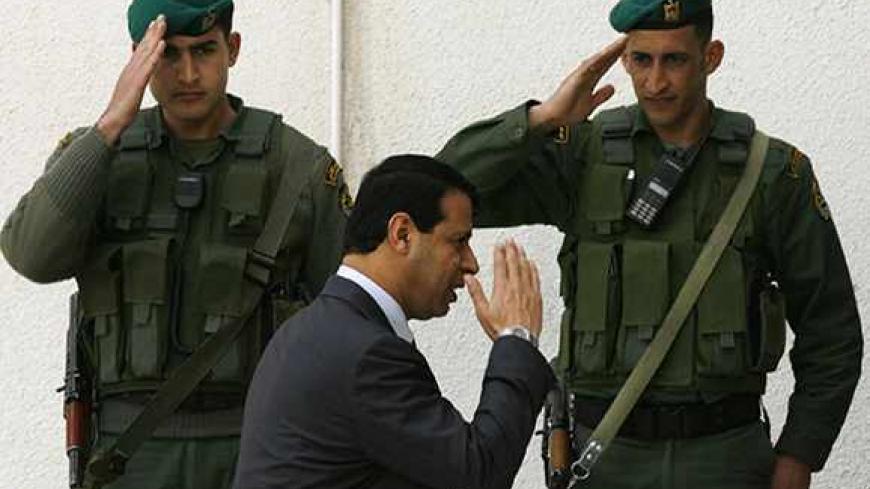 The Fatah movement in the Palestinian territories and abroad is living through a historic and difficult stage, given its widening differences. The latter is not with Hamas — as is presumed — but between two essential Fatah currents, one led by the president of the Palestinian Authority (PA) and Fatah leader Mahmoud Abbas, and the other led by Mohammed Dahlan, a member of the Legislative Council who has been separated from the movement since June 2012. Al-Monitor’s Daoud Kuttab wrote on Oct. 30 about Dahlan’s possible return to the West Bank, but discounted the possibility that Dahlan would return to Palestinian politics, at least in the near future.

The differences between Abbas and Dahlan have reached the “bone-breaking” stage, as described to Al-Monitor by a source close to the Palestinian presidential headquarters. This quarrel heated up after Dahlan, who lives in Dubai, put a lot of effort, using his money and his political connections, into surpassing Abbas within Fatah’s ranks. Perhaps what made things worse between them was when Abbas learned that Dahlan had managed to attract a number of Fatah leaders to his side, according to the same source.

The same source, who spoke with Al-Monitor from inside the Ramallah “headquarters,” stressed that Abbas enjoys clear advantages over Dahlan: Abbas is the president, who is followed by the government, headed by Rami Hamdallah. So Abbas can give and withhold money from whomever he wants, and appoint whomever he wants to any position. Abbas is also the head of the Fatah movement.

Abbas has expressed his anger with Dahlan by dismissing and arresting the latter’s supporters in the security services, ministries and embassies. In early September, Abbas ordered that the movement of Dahlan’s supporters be restricted inside the Palestinian refugee camps at home and abroad, particularly in Lebanon. Abbas also dismissed all employees affiliated with Dahlan in the Palestinian diplomatic corps, such as consuls and ordinary employees, and replaced ministry agents close to Dahlan in the ministries of interior and exterior.

In early October, Abbas was in contact with Lebanese officials to prevent Dahlan’s wife, Jalila, from entering the Palestinian camps.

A pro-Dahlan senior Fatah official who resides in Gaza told Al-Monitor that Dahlan has characteristics that put him ahead of Abbas, including alliances with a number of members in Fatah’s Central Committee and Revolutionary Council, as well as with some officers in the security services who are inside and outside the Palestinian territories.

He added that Dahlan’s strongest card is his alliance with Marwan Barghouti, a senior West Bank Fatah leader still in an Israeli jail.

Al-Monitor has also learned that the differences between Fatah leaders have reached Gaza, indicating that the conflict between Fatah poles and currents has heated up lately, with sharp alignments and mutual accusations of treason. That happened after the formation of new organizational committees to manage the Fatah organization in Gaza.

For this report, Al-Monitor conducted intensive contacts with people close to Abbas and Dahlan. Al-Monitor can confirm that there have been four attempts at reconciliation between the two men in Jordan, the UAE and Egypt. But all attempts failed because both men refused to make concessions that would make them look weak. Then their relationship deteriorated after they made strongly worded declarations and criticisms against each other.

Fatah’s Central Committee accused Dahlan of having a “conspiratorial project,” and claimed he was directly involved in assassinating a number of Fatah figures, abusing the powers of his office, and illegally collecting millions of dollars for his bank account. The Central Committee considered Dahlan a fugitive from justice who works in line with Israel’s agenda.

Dahlan’s response was an attack on Abbas, accusing him of failing to carry out his responsibilities toward the Palestinians and leaving them wallowing in poverty, thus forcing some of them to work in building Israeli settlements.

An overview of pro-Dahlan Fatah news sites shows pro-Dahlan headlines that attack Abbas, most notably: “The Provocative Statement by the Central Committee Renews the Allegiance of Fatah Members to Dahlan.” Another headline read: “The Current Fatah Leadership Has Become a Private Preserve for Abbas’ Sons!”

The war of succession

The raging battle between Abbas and Dahlan is related to the issue of who will succeed the 78-year-old Abbas, and Dahlan’s desire that Abbas’ successor be the head of both the PA and Fatah. Dahlan sees himself as the most qualified for the presidency because most of the movement’s founding members are dead and Dahlan is the only one with the keys to power — money and security — according to what the Fatah leader in Gaza told Al-Monitor.

News has been circulating in the Palestinian arena that Dahlan has adopted Zahwa, the daughter of late President Yasser Arafat, on the grounds that whoever controls Arafat’s legacy sees himself his heir.

In contrast, the Palestinian source inside the Ramallah headquarters stressed that Abbas has learned a lot of things during his many years with Arafat, including keeping the identity of his successor secret so that he alone remains at the top, without being in a rush to appoint a successor.

Also, the quarrel between Abbas and Dahlan may affect the future of the negotiations with Israel. Dahlan has accused Abbas of structuring the negotiating delegation in a way that achieves Abbas’ selfish interests and increases his wealth, rather than in a way that recovers Palestinian rights, wins the support of America and Israel, and serves the survival of a project supported by a tight circle.

Dahlan added that the PA under Abbas is too weak to approve or reject an Israeli request and that some of the PA’s organs create the conditions for settlement construction by securing the areas surrounding these settlements.

Al-Monitor has learned from a Palestinian source close to the negotiating circle that there are fears that Israel may leak the negotiations minutes to Dahlan so that the latter can use them against Abbas by portraying him as someone who offers concessions to Israel. That fear is hampering the negotiations.

Finally, the conflict between Abbas and Dahlan has crossed red lines. It has violated what the Palestinians call the “honor of rivalry” and is making reconciliation between the two men harder. This is exposing Fatah to internal rifts because its members’ loyalties are divided between the two men. All that ends up serving the two men’s strongest rival, Hamas, which has maintained great secrecy and discipline within Palestinian organizational quarrels.

Adnan Abu Amer is dean of the Faculty of Arts and head of the Press and Information Section as well as a lecturer in the history of the Palestinian issue, national security, political science and Islamic civilization at Al Ummah University Open Education. On Twitter: @adnanabuamer1