Israeli sanctions on Palestinians could backfire

The Israeli assumption that economic pressure will return the Palestinians to "the straight and narrow path," has already proven to be ineffective and might endanger the motivation for successful security cooperation. 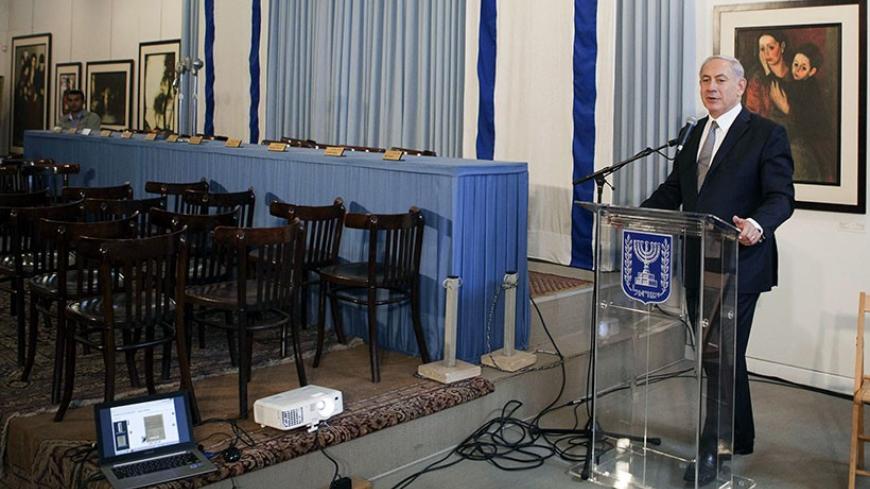 Israel's Prime Minister Benjamin Netanyahu delivers a statement in the Independence Hall of Israel in Tel Aviv May 1, 2014. - REUTERS/Dan Balilty

On April 29, Israel began economic sanctions on the Palestinian Authority (PA) on the heels of the reconciliation agreement between Fatah and Hamas. This is accomplished by deducting the PA’s debts from the tax money that Israel collects on the PA’s behalf in accordance with economic agreements signed following the Oslo Accord. These funds serve the PA for payment of its employees' salaries. At this point, after the collapse of the negotiations and without any diplomatic resolution, the Israeli punishment has weighty implications.

Israel has already activated this type of weapon many times in the past, as far back as 1997. But not only did it not achieve its desired goals, it even caused greater damage — the results of which are borne by Israel to this very day.

And so, on the day Hamas won the PA elections in January 2006, former Prime Minister Ehud Olmert decided to punish the PA for the results of the vote. In a shoot-from-the-hip move, the State of Israel under Olmert’s leadership and guidance decided to freeze the transfer of tax funds that Israel collects for the PA; this transfer is mandated by economics addendums of the Oslo Accord — the Paris Protocol of 1994 and, later on, the Trade Agreement of 2012. A major source of these funds is the taxes imposed on merchandise imported to the territories via Israel, and these funds often comprise as much as a third of the PA’s budget. Hence, the funds are the source of the salaries of the PA’s employees, including the security apparatus personnel.

The assumption that guided the Israeli decision-makers in 2006 and today as well, so it seems, is that economic pressure will instill "reason" or regret in the minds of the Palestinians. As a result, they would aspire to draw the right conclusions and "return to the straight and narrow road." However, this approach was not proved to be effective. Over the many months in which the PA employees did not receive their salaries, their morale dropped as did their motivation. In addition, the Palestinian depots emptied and the security apparatuses barely functioned because there was no money for the operational equipment needed for routine activity (vehicles, ammunition, uniforms). As far as weapons and ammunition supply from Israel in general, that was out of the question altogether.

The gloomy results were not long in coming. Hamas in Gaza, which enjoyed stable, wide-ranging supplies from Iran at the time, was able to equip its own forces — the "implementation forces" established as a counterweight to the PA forces. The movement’s logistics personnel were deployed throughout the Gaza Strip and served a hot lunch every day to the armed Hamas men who patrolled the streets. On the opposite side, Palestinian President Mahmoud Abbas’ policemen were forced to walk the distance to the warehouses of the United Nations Relief and Works Agency for Palestine Refugees in the Near East (UNWRA), where they received food coupons to keep body and soul together.

When Hamas carried out a military coup in Gaza in June 2007, the PA security mechanism's personnel were so depressed that they did not even fire a single shot. They were equipped with outdated, dilapidated weapons; their spirits were low and fear of Hamas was great. Thus, Gaza easily fell into Hamas hands, and Israel had a not insignificant part in the collapse of the Palestinian systems.

But, as aforesaid, the lesson has not been learned. Again, the "punishment" that Israel decided to inflict on Abbas due to the latter’s understandings with Hamas toward reconciliation may well prove to be a very bad deal. Now, more than ever.

For many months now, the West Bank has suffered from what is defined by senior security officials as "troublesome agitation." This is expressed in local attempts to get organized to carry out terrorist attacks against Israel.

The Shin Bet’s annual summary for 2013 (Data and Trends in Terrorism) states the following: “[a] rise in the scope of terrorism in the Judea and Samaria region with an emphasis on the Judea region. … Most of the slain (Israelis) are the result of a terrorist act carried out by local infrastructures, and some follow the 'isolated perpetrator' pattern.” This trend has gathered momentum in recent months.

Most of these organized structures, as referred to by the Shin Bet report, subsist in West Bank refugee camps, in calamity-prone regions such as Jenin and Nablus. The more that hardships multiply, the more that unemployment in the territories deepens and the more these local organizations expand into further regions because they ensure challenges and alternate employment for desperate and frustrated young people.

The equation of a severe economic crisis in the PA, as a sure-fire catalyst for the outbreak of violence, is unquestionable. The pundits of the International Monitory Fund (IMF) made this connection on Feb. 6. In the IMF report published in the course of the negotiations between Israel and the PA, it was estimated that failure of the talks would lead to an economic crisis in the PA. This was without even taking into account Israeli sanctions that would worsen the PA’s already shaky economic status.

In interviews he gave after the blow-up in the negotiations and suspension of the contacts to the Israeli media, Abbas rather proudly acknowledged that an effective security cooperation with Israel was maintained. He also acknowledged that there is even a very good relationship, on the personal level, with Shin Bet Chief Yoram Cohen. This security cooperation, which has extended from the end of the second intifada, has averted organized terrorist activity and thwarted numerous terrorist attacks in Israel.

Frequently, the Palestinian security apparatuses — mainly the Preventive Security Force in the West Bank — were accused of collaboration with Israel. Therefore, the expectation that such cooperation will continue effectively after the imposition of economic sanctions, and after Israel will be viewed as the entity that impairs their livelihood, is exaggerated and unrealistic.

Diplomatic negotiations have crashed, and the diplomatic horizon is shrouded in mystery. As a direct continuation of this, we are likely to see heightened desire and motivation to carry out terrorist attacks against Israel by isolated perpetrators or locally organized structures. But if Palestinian security, which is supposed to fight terrorism, will be preoccupied by existential worries over its survival and that of its family members, one cannot expect it to restrain agitators in the PA or arrest those who plan attacks against Israel.

The outdated weapon that Israel continues to use — the economic sanctions weapon — has long since been proven a dangerous weapon indeed. This time, it is again likely to blow up in our faces.