Will there be a third intifada?

Despite growing tensions with Israel, Palestinians must decide whether to preserve the fragile rule of order and security in the West Bank or launch a third intifada. 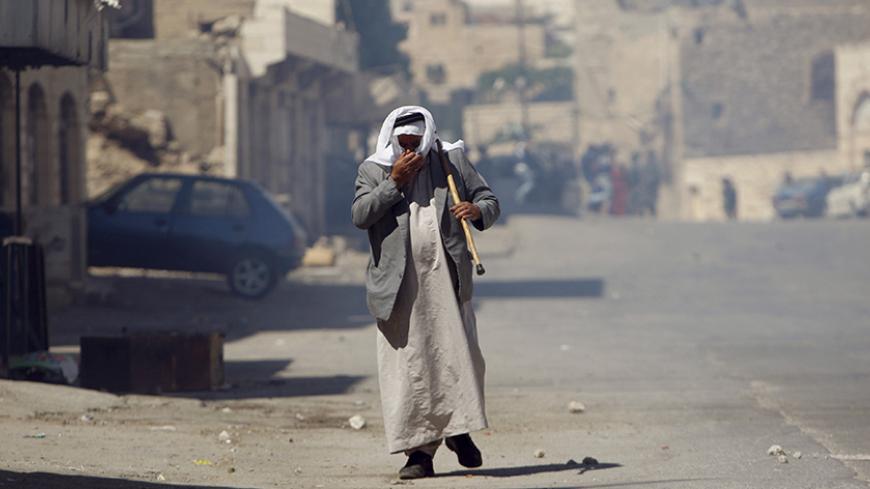 A Palestinian man covers his face from tear gas fired by Israeli troops during clashes following a protest against the Israeli police raid on Jerusalem's Al-Aqsa Mosque, in the occupied West Bank city of Hebron, Sept. 18, 2015. - REUTERS/Mussa Qawasma

It is said to be a fait accompli, with only the timing undecided. Will a third intifada erupt on the Temple Mount and spread like wildfire across the West Bank? Will it be Hebron that ignites the fire, the sparks of which are already visible? Stones, firebombs and stabbings are the telltale signs of the start of a new round of popular violence between Israelis and Palestinians, but are we really on the cusp of a third intifada?

Palestinian President Mahmoud Abbas has recently taken to issuing public warnings that unless Israel cools the heated emotions, particularly at the Temple Mount, an intifada will undoubtedly flare up. He relayed these concerns during a Sept. 22 meeting with French President Francois Hollande as well as in a meeting Aug. 18 with Isaac Herzog, leader of the Knesset opposition. Apparently, Abbas also intends to express dire warnings during his Sept. 30 UN General Assembly speech, which, his associates assert, will be his strongest yet.

“This is only a political game by the president,” a senior Palestinian official familiar with the prevailing mood told Al-Monitor on condition of anonymity. “Let’s face it. There’s no doubt that there’s great tension, frustration and despair, pretty much everything you need in order to have the people take to the streets. But only if Abbas wants it will an intifada that’s intense, violent and popular break out.”

The official explained that without a prominent body coaxing the street, there will be no intifada on the scale of the two previous ones, which began in 1987 and 2000. According to him, the Hamas movement, which is being suppressed by the Palestinian Authority in the West Bank, is unable to rear its head. Moreover, given Hamas' dire situation in the Gaza Strip, it remains uncertain whether its leaders even want to stoke the fire at this time.

According to the official, Fatah is the only movement capable of setting off a violent popular confrontation against Israel, but it is experiencing a major leadership crisis. Its senior members are preoccupied with who will succeed Abbas if and when he decides to follow through with his recent threat to step down.

The Palestinian public has been disappointed for quite some time with Abbas’ policies and with the Palestinian leadership in general. The president is perceived, primarily by the younger generation, as someone clinging tightly to his seat without elections. This widespread criticism of Fatah's conduct should not be dismissed offhandedly. It could very well prevent senior Fatah members from initiating efforts able to captivate a weary and frustrated Palestinian public.

It appears that many, if not all, Palestinians in the West Bank have lost trust in the current Palestinian leadership. Sentiments to this effect can be heard everywhere, in all circles and walks of life, from Hebron to Nablus to Qalqilya and Ramallah.

According to a poll conducted by the Palestinian Center for Policy and Survey Research, headed by Khalil Shikaki, and whose results were published Sept. 21, 42% of respondents believe that only an armed struggle will lead to Palestinian statehood. In reality, however, by all indications on the ground and despite Palestinian frustrations, an all-out conflict with Israel, namely, a third intifada, is not really seething below the surface.

Two Palestinians were recently killed in the Hebron area. At the Hashoter roadblock on Sept. 22, Hadil Hashlamoun, 18, was shot dead while, according to the Israel Defense Forces (IDF), trying to stab a soldier. A few hours earlier, Diyaa Abdul-Halim Talahmah, 21, was killed, apparently after a makeshift grenade he was planning to throw at an IDF detachment exploded in his hand.

A few hundred residents attended Hashlamoun and Talahmah's funeral. Hebron, the most highly charged city in the West Bank and once considered the champion of popular resistance, quickly returned to its routine, without residents being carried away into a cycle of violent incidents.

Yunes Aida, who lives near Shuhada Street, Hebron's main commercial thoroughfare, told Al-Monitor that despite friction with Israeli settlers and the feeling among Palestinian residents of the city (and elsewhere) of being at a dead end, most young people prefer to stage popular demonstrations as acts of protest rather than a violent intifada, which they do not think will bring change to their situation.

“I was 14 when the second intifada broke out,” he said. “There were many fatalities and casualties. It was a big mess. It didn’t bring us a solution. People know that another intifada and more fatalities will only make their lives harder. They don’t have the energy for that. It’s not just my own personal opinion. I’m telling you what all the people here are saying.”

Another young man from Hebron, a news agency photographer who covered the second intifada and is currently covering events in the Hebron area, agreed with the perspective that an intifada is not imminent. Speaking on condition of anonymity, he acknowledged that there is no denying the tension on the ground, but he also said, “But your soldiers are also acting differently. You could see it during the funeral of the two young people that were killed. The military kept its distance and tried not to be dragged [into violence]. It wasn’t like this in the past. It looks like [they were given] orders to be extra careful. I wish they had acted like that during the second intifada.”

This, in essence, is the prevailing atmosphere in the territories. It is complex, complicated, confusing and rife with contradictions. Unlike the tumultuous period when Yasser Arafat was at the helm of the Palestine Liberation Organization, under Abbas’ leadership the Palestinian security forces have instilled a sense of order and personal security the likes of which have never been experienced in the territories, the tensions with Israel notwithstanding. It seems that no one, including the Palestinians themselves or Palestinian Authority (PA) leaders, is interested in a return to total chaos and destruction of PA institutions, which were painstakingly built and are now considered by all Palestinian West Bank residents to be their legitimate political and civilian establishment.

While according to Shikaki’s poll, there are many Palestinians who believe that only an armed struggle will help them realize the dream of Palestinian statehood, they are, at the same time, reluctant to join in an armed struggle. This may have to do with the leadership crisis and the deep disappointment with the incumbent Palestinian leaders. It is also possible that the wounds of the second intifada have yet to fully heal or that Palestinian society, much like Israeli society, is going through the same process of sadly coming to terms with the current situation.