Demonstrating against the Israeli occupation, young Palestinians have also been pointing a finger at President Mahmoud Abbas, who has finally addressed them and their problems in his latest speeches. 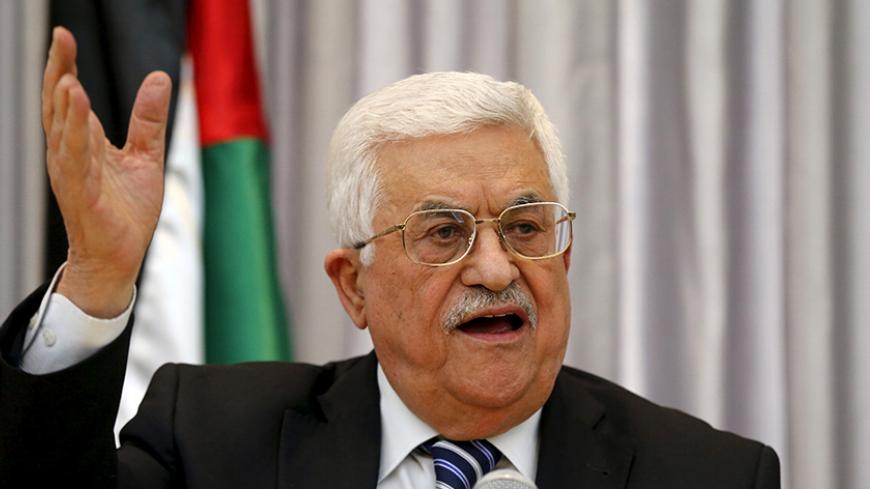 Palestinian Authority President Mahmoud Abbas is under pressure. Even louder than polls and close advisers, the voices from the Palestinian street have broken through the walls of the Muqata and made him realize that the winds of change blowing outside could quickly turn into a deadly storm. It started with the knifing intifada, the scale and character of which not even the most seasoned Fatah officials and the most knowledgeable activists on the ground had foreseen. Now they, too, feel the wind lashing at their windows.

There’s nothing new about the internal Palestinian criticism of the Fatah movement and the PA. The immense gap between the promises for change and the reality on the ground has plagued Palestinian existence since the Oslo Accord days. However, what was once whispered with fear and trepidation is now expressed openly.

Until a few months ago, the rage was directed exclusively at Israel. All of a sudden different voices are being heard: “Abbas, go home” or “Down with the PA.” It seems that people have had enough. The psychological barriers have come down in a process reminiscent of the demonstrations in Egypt at the start of the revolution in 2011. Maybe the Palestinians have reached a breaking point, feeling they have nothing more to lose. And maybe the lone-wolf attacks that broke out in October 2015 have given many people the courage to openly set out against the leadership that has failed them and refuses to be held accountable.

Khalil Shikaki, the head of the Palestinian Center for Policy and Survey Research, whose polls are considered the barometer of the mindset in the territories, published on Dec. 14 a comprehensive study that suggests that two-thirds of the Palestinian population want to see Abbas resign. The same portion supports the uprising. Shikaki estimates that the results of his poll, which was conducted at the beginning of December over 1,270 respondents from the Gaza Strip and the West Bank, reflect the frustration and despair of the young generation. Based on the poll, he speculates that if elections in the PA were held today, Ismail Haniyeh — Hamas’ candidate — would beat Abbas by a landslide.

Abbas doesn’t make do with just reading the polls. He also gets status reports from Palestinian intelligence agencies and Fatah activists, who are also concerned about their own fate. The knifing intifada broke out over the heads of PA leaders as well as those of Fatah and its militia Tanzim. They have all arrived at the conclusion that Palestinians are fed up with them and their policies. Considered in the inner circles of the Muqata the one who understands better than anyone else the mindset of the Palestinian street, Jibril Rajoub has advised Abbas that if he wants to remain in power he must embrace the young people and find practical solutions to their problems before it is too late. Indeed, there are many problems, but two issues are particularly troubling.

The first one relates to the immense frustration with the current economic situation and the fear that things will only get worse. Every young Palestinian knows what to expect in the coming years. It is already difficult for any of them to find gainful employment today, and the situation will only deteriorate further while the PA does not offer any prospects of advancement or development of the labor market.

The second issue that concerns the young generation is how they compare to their counterparts around the world. Now that our planet is a global village, the young generation in the West Bank — university graduates as well as those who take on low-paying jobs to help their families make ends meet — dream of a life like those of their peers around the world in terms of employment, income, freedom of movement and a democratic regime, as is common in the rest of the free world. Such a regime has not existed in the PA for over a decade. The last elections were held 11 years ago, in January 2005, following which Abbas rose to power. Dreaming of and yearning for change, the young generation feels that it cannot penetrate the closed, depraved political system set up by Fatah and the PA.

The voices against Abbas and the PA are loud and clear in the demonstrations and rallies across the West Bank. However, it should be stressed that there are no demonstrations in the West Bank in which the PA is singled out as the target. Generally speaking, these demonstrations and marches protest Israel’s policies, but at the same time criticism is also voiced against the PA and its leader. Thus, Israel, Prime Minister Benjamin Netanyahu, the PA and Abbas are all lumped together into one protest. This multifaceted protest should be no surprise, because the young generation in the West Bank blames both Israel and the PA for the situation. Although each shares the responsibility to varying degrees, the result is collective frustration, despair and hopelessness.

Abbas has realized, perhaps too late, that he needs to take action. His last two speeches express more than anything else his understanding that he needs to change his priorities and start taking steps that will bring the younger generation closer to him and give it a glimmer of hope, or his rule will come to an end.

In his keynote address on Dec. 31 to celebrate Fatah’s foundation day, Abbas devoted a great portion of his speech to the young generation in the West Bank. He told this group that he understood its plight and that he and his senior officials were doing everything they can to develop the homeland and society. Abbas pledged, for the first time since his election, to set up a national fund to support the employment of young people. What is the nature of that fund? When will it become functional? How exactly will it help the desperate young people in the West Bank? Abbas left all those questions largely unanswered.

In another speech the Palestinian president delivered on Jan. 6, he outlined a grandiose plan to build housing units for young couples — a plan that is in the pipeline and being developed and promoted.

Will the plans that Abbas tossed in the air help to save his regime or at least muffle criticism of his leadership? It’s highly doubtful. Mired in a political struggle for survival, senior PA officials will find it very hard to produce results on the ground to a generation clamoring for housing, employment and hope here and now. From the standpoint of this young generation, more should be done on its behalf than just blaming it all on the Israeli occupation.