The attack near the Beit El settlement this weekend is the second one by a Palestinian security officer, and there is immense pressure from the Palestinian street on others to join the uprising. 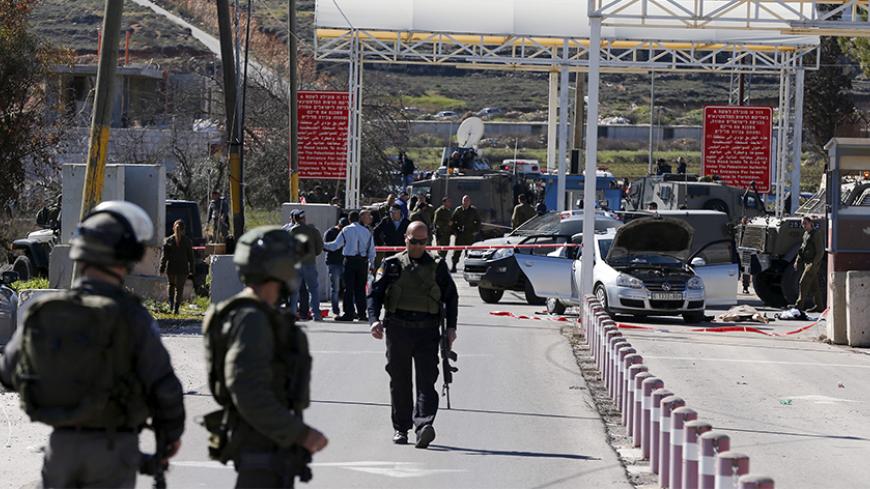 Intifadas have rules of their own. At first the field bubbles with economic distress, clashes with settlers, despair and hopelessness. Then a singular event sparks a fire and builds the first circle of recruits to the intifada. In the current uprising, this circle is made up of young assailants who lack organizational affiliation and carry out mostly knife attacks without directives from anyone. But as time passes and the number of casualties on the Palestinian side increases, the circle of recruits widens. The desire to take revenge for the deaths of the attackers becomes the main motive for what is seen by many Palestinians as a war of no choice.

At a certain point the pressure to join also affects members of the Palestinian security forces. The population in the territories believes these forces are supposed to defend it and maintain security in the face of any threat, and the main argument is that when they sit on the fence, the weapons they carry become meaningless.

In the first intifada, armed members of Palestinian organizations (Fatah, the Popular Front and Hamas) joined the multitudes who protested at the Jabaliya refugee camp in Gaza. In the second intifada, Palestinian police, including the Preventive Security Forces in Gaza and the West Bank, were forced off the fence and into the circle of recruits against Israel.

Now we're seeing the first signs that the "individual intifada" has reached this stage. Amjad a-Sukari, a police officer who worked as the personal security guard of the Palestinian Authority's public prosecutor in Ramallah, Ahmad Hanun, carried out a shooting attack on the morning of Jan. 31 near the Beit El settlement and injured three Israeli soldiers.

On his Facebook page, a-Sukari wrote before the attack, “It is right to live in this land, but sadly I see nothing justifying life as long as the occupation overshadows our souls and kills our brothers and sisters, our dead, may they rest in peace. May God heal our wounds and free our prisoners.” He wrote to the "shahids" (martyrs) of the current intifada: “You are the first and we, with God’s help, are coming after you.”

A-Sukari, a resident of the village of Jama’in near Nablus, is a married father of four, the youngest being a six-month old infant.

Ariba and a-Sukari are likely the first two of many. The social pressure from their surroundings is heavy, particularly for officers living in refugee camps and impoverished Palestinian villages. Security personnel find it hard to stand up to this pressure and many come to believe they must defend their honor.

Karam Abu Warda, a resident of the Balata refugee camp near Nablus, told Al-Monitor that in the refugee camps, members of the security forces have become a subject of ridicule for the residents for what is interpreted as their fear of Israelis. One joke goes, “What does a Palestinian police officer do when he sees Israelis fire at a freedom fighter?” The answer, “Raises a white flag and joins the Israelis.”

The PA is aware of the great pressure on its security personnel. It directs the police officers to explain to residents that the authority is working by diplomatic means that have already borne fruit, and that the PA must maintain order and security to protect its sovereignty. If Israel damages the security forces again, as happened during the second intifada when Israel directly attacked its buildings in the Gaza Strip and the West Bank, it may hurt Palestinian interests.

About a month ago, members of the Palestinian security forces arrested a Palestinian police officer who fired at an Israel Defense Forces patrol near the village of Silwad near Ramallah. The father of the shooter turned him in to the PA, and he was sentenced to 10 years' imprisonment by a court in Ramallah. A report on the arrest and the sentence was given to Israel in the framework of security cooperation meetings between the sides, probably to demonstrate to the Israeli side that the PA is taking a tough stance on officers who take such actions. The assumption in Israel is that the PA very much fears a deterioration of the situation and the potential Israeli response.

For this reason, the security establishment’s conduct since the outbreak of violence in October has been cautious and balanced. It's also the reason, said Coordinator of Government Activities in the Territories Gen. Yoav (Poli) Mordechai Jan. 31, why the Palestinian public has not taken to the streets and demonstrations have significantly decreased.

Will the PA be able to maintain control and prevent additional police from following in the footsteps of a-Sukari and Ariba? And what will influence Palestinian security personnel more: social and environmental pressure and the urge to defend what they see as their lost honor, or perhaps the PA's efforts to deter anyone from violating Palestinian interests?

The answer to these questions lies in the biggest unknown of all: How much longer will the individual attacks last, and how will Israel respond to them? As the number of Palestinians killed increases, so will the pressure and desire of Palestinians to rise up in response.

Assuming that Israel does not currently have a military answer to the escalation of violence, it seems that the Israeli restraint favored by Mordechai is not enough. As stated, intifadas have their own rules.

One worrying development is already clear: a transition from stabbing attacks by frustrated youths to the use of firearms by those wishing to take revenge for their deaths. Such shooting attacks threaten to change the nature of the uprising and force Israel to modify its response.