Can the IDF withstand political pressure?

The Israel Defense Forces believe hope and economic opportunity are the keys to calming the current wave of Palestinian attacks, but political leaders are pressing for a military response. 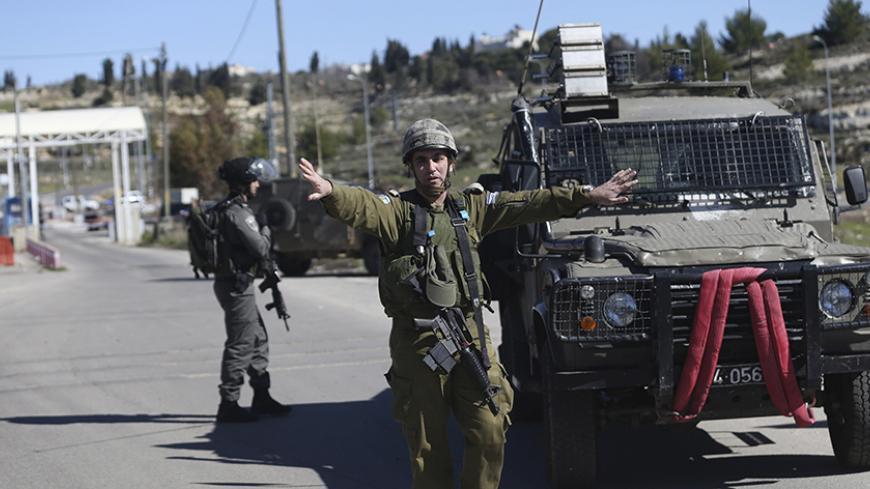 An Israeli soldier gestures near the scene of a shooting attack at an Israeli military checkpoint near the West Bank city of Ramallah, Jan. 31, 2016. - REUTERS/Mohamad Torokman

The closure imposed on Ramallah on Feb. 1 and its partial lifting a day later are telling in terms of disagreement between Israel’s top military brass and the political echelon on how to deal with the lone attacker intifada that broke out in October. Since that time, the Israel Defense Forces (IDF) have been pressed to restrict the movement of residents in Palestinian towns in the West Bank in a bid to prevent them from getting into Israel and carrying out terror attacks. In the aftermath of the Jan. 31 shooting at a roadblock near Bet El by Amjad a-Sukari, a Palestinian police officer, the IDF has been forced, for the first time during this intifada, to impose a closure on Ramallah.

For months, the IDF chief of staff, Lt. Gen. Gadi Eizenkot, has staved off demands from the political echelon to impose a closure on the territories, arguing that the damage would far exceed any benefits. “It would be a bitter mistake to impose closures and blockades on the territories. This would be counterproductive for Israel,” Eizenkot said Jan. 18 at a conference held by the Institute for National Security Studies (INSS), adding that the Palestinian population should be given hope and the possibility to make economic ends meet.

In view of the current situation, the closure of West Bank towns could deal a lethal economic blow to Palestinian residents as well as the Palestinian Authority (PA). Based on what the chief of staff has said, as well as recent security reviews submitted to Cabinet ministers by Israel’s defense chiefs, the IDF and Shin Bet contend that the dire economic situation in the territories was the main catalyst for the current intifada. The working premise is that while such measures as closure could encumber potential assailants to a certain extent, their economic ramifications would encourage many more Palestinians to join the cycle of violence.

The IDF finds itself in a bind. On the one hand, it opposes closures, but on the other hand, it has yet to devise an alternative operational response to present to the government for curbing attacks. In his INSS address, Eizenkot candidly acknowledged that there had been no early warnings about the stabbing attacks that individual Palestinian assailants have been carrying out. “We’ve had 101 such incidents, and we were unable to provide any early warnings whatsoever,” Eizenkot said. That being the case, the IDF’s problem is much more difficult than that. Not only does it lack early warning intelligence to help it avert such attacks, it also has no specific targets to go after to deter or stamp out the phenomenon.

After the Bet El shooting, which Israelis view as a deterioration in the situation due to the assailant’s affiliation with the Palestinian security forces, the IDF has come to the realization that it cannot stave off pressure much longer from the political echelon, especially from Prime Minister Benjamin Netanyahu, to shift from pre-emptive measures to a more proactive and offensive posture — to wit, from a policy of restraint to a policy of reaction. This is how the closure of Ramallah came to be.

In Israel, there is currently an odd reversal of roles between the political and defense establishments. The government gave the order to impose a closure on Ramallah despite the disinclination to do so by the IDF, which is supposed to develop military solutions to curb the wave of terror. The IDF, or more precisely, its chief of staff, is taking on the role of the responsible adult, trying to refrain from collective punishment that could result in a serious deterioration of the situation. It is the military that is using discretion rather than government ministers, who continue to clamor for an iron-fisted approach against West Bank Palestinians regardless of the price Israel would have to pay down the line.

In mid-January, a similar dispute arose between Netanyahu and the IDF concerning the entry of Palestinian workers into the settlements. After the murder of Dafna Meir in Otniel and a series of other terror attacks in the area, the prime minister declared Jan. 19 that Israel would not hesitate to ban Palestinian workers from entering the settlements. A few hours later, a directive to this effect was given to the IDF; it remained in effect for only two days.

The Central Command did an assessment of the situation, at the end of which it informed the political echelon that measures would be taken to prevent potential terrorists from entering the settlements. One such measure — so long as the politicians agree to undo the sweeping directive — is to vet anew all the work permits issued to Palestinians. The IDF estimates that the thousands of Palestinians working in the settlements, mainly in agriculture, drive a significant portion of the Palestinian economy in the West Bank.

Speaking on condition of anonymity, a Palestinian security source said that the person championing a lenient approach toward the Palestinian economy, and who is very worried about its potential collapse, is Maj.-Gen. Yoav “Poli” Mordechai, the coordinator of government activities in the territories. From Mordechai’s perspective, promoting and maintaining the Palestinian economy is a paramount Israeli interest. Accordingly, the way the IDF should confront the intifada is not by implementing military measures, but by improving the Palestinians’ standard of living and giving them hope.

How long can the IDF’s policy of containment and restraint last? How long will Eizenkot and Mordechai be able to withstand the pressure from Netanyahu and his ministers? The answer depends on what develops with the intifada. It depends on whether forces from Palestinian organizations join it and stoke more violence or whether it peters out over time, and the IDF’s policy of restraint proves itself.

That a Palestinian police officer perpetrated an attack has restricted the IDF top brass's room to maneuver in their dialogue with Israel’s political establishment. The closure of Ramallah following the Bet El attack has sent a message not only to the PA, but to the IDF as well. Netanyahu has given the chief of staff and the coordinator of government activities in the territories one more extension to fight the intifada by employing limited civilian measures, but their time is running out.