The rise of the individual intifada

The prevailing IDF assessment by which the current wave of violence will die out has been proven wrong, with Palestinian attackers now using guns instead of knives. 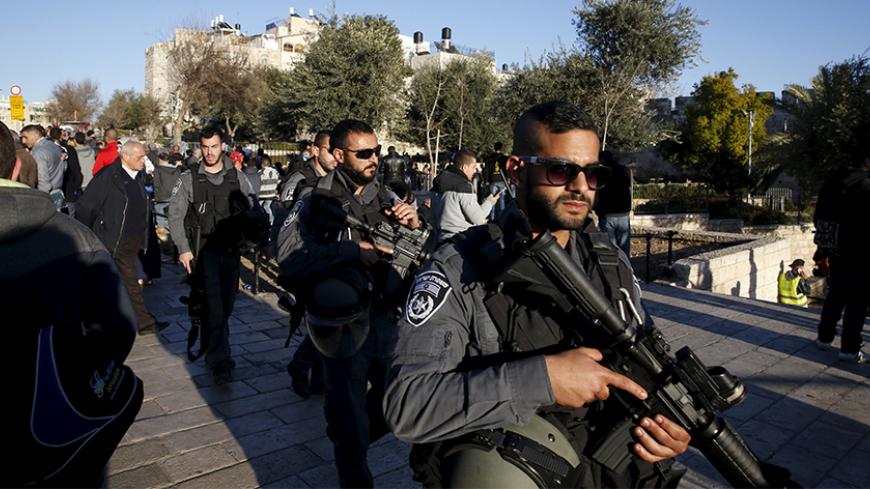 Israeli policemen patrol an area near the scene where three Palestinians were shot dead by Israeli police after carrying out a shooting and stabbing attack outside the Damascus Gate to Jerusalem's Old City, Feb. 3, 2016. - REUTERS/Ronen Zvulun

The first week of February will go down in history as a turning point in which new, more sophisticated and more dangerous forces joined the intifada. Three terrorists — Ahmad Zakarna, Muhammad Kamil and Ahmad Abu al-Rub — from the Qabatiya refugee camp near Jenin, carried out the Feb. 3 terror attack near Damascus Gate in Jerusalem. The three men were able to upset the profile of the typical assailant that the Israeli defense establishment has devised since the start of the intifada. This occurred shortly after a Palestinian police officer, Amjad a-Sukari, carried out a shooting attack Jan. 31. He, too, did not match the profile of your typical assailant.

We are no longer talking about young terrorists indoctrinated by incitement from Palestinian television and social networks, who, on the spur of the moment, decide to mount a stabbing attack. It is believed that the young cell from Qabatiya was planning a multi-casualty attack. The three-man cell arrived in Jerusalem armed with guns, makeshift explosives (pipe bombs) and knives. They aroused the suspicion of the Israeli border police, and when asked to show their IDs, they attacked the two policewomen. In the exchange that ensued, Hadar Cohen, 19, a border police officer, who managed to fire at one of the terrorists before collapsing, was killed. Her colleague was seriously wounded.

“Terrorists who come with three guns, knives and explosives are not looking to target a few border police officers. We still don’t know what their objective was — a train, HaGuy Street or a bus. But what we do know, however, is that a massive attack has been averted,” said Roni Alsheich, the police commissioner, during a visit to Hadassah hospital.

How did the three men carrying guns, ammunition, makeshift explosives and knives manage to pass through all the military roadblocks? The Israel Defense Forces must certainly be looking into this question. It seems that the three terrorists would not have been able to get to Jerusalem from Qabatiya had the IDF not been grappling with the issue of whether this is a transient wave of terror or a full-fledged intifada. This is probably the price Israel is paying for its policy of restraint championed by Lt. Gen. Gadi Eizenkot, the IDF chief of staff, to keep the Palestinian Authority from collapsing.

To date, nearly all the assailants who have carried out attacks in Israel were characterized by the defense establishment as young people with no prior security records. That being the case, the underlying concept has been that as long as the armed organizations are straddling the fence, such incidents can be “contained.” In other words, this is an intifada lite, which requires equally “lite” measures.

The Qabatiya cell is revealing in terms of the deep process taking place in the territories, which exposed Israel to a spate of attacks by young people — attacks that can be neither monitored nor scuttled in advance. At the same time, these young people pose a significant threat to the PA’s regime as well as to the ongoing activity of the Palestinian organizations. The young people of the new intifada are rising up against the old order, seeing both Israel and the PA as the enemy. From their standpoint, it would not be a disaster if the PA, headed by President Mahmoud Abbas, were to collapse. As far as they are concerned, the PA is a major obstacle to a better future for them.

Under pressure from the IDF, Israel has so far refrained from taking any military or operational measures against the PA. According to Eizenkot, the PA must be kept alive at all costs. In his opinion, military measures, closures, blockades and similar actions could bring about the collapse of the PA, thereby posing a far greater security risk to Israel.

Yet, Israel cannot pursue this policy of restraint and think that the wave of terror will wane on its own. This is a misguided concept. A-Sukari and the Qabatiya cell have proven that Israel’s policy of restraint, which is backed by neither diplomatic nor military measures, will not be able to stop the intifada. This is a deep and broad process that is drawing large populations from the West Bank. As far as they’re concerned, they have nothing to lose.

Only four months have passed since the outbreak of the lone-attacker intifada on Oct. 1, which — as it turns out now — is no longer just perpetrated by individuals. During this period, over 100 terrorists have set out to commit terror attacks in Israel. This number is much higher compared with the number of suicide bombers during the second intifada, which lasted nearly five years, from 2000 to 2005.

On an almost daily basis, a Palestinian terrorist is on his or her way to carry out an attack in Israel. All of them, without exception, have no “prior security record.” This characterization is misleading, however. All those attackers were small children during the second intifada, which is why they cannot have a “security record.”

Although the three terrorists from Qabatiya hail from hamullahs (clans) known in the refugee camp to support Fatah, they planned the attack in Jerusalem on their own. They were not assisted by the organizational infrastructure of Fatah’s militias — the Tanzim or Al-Aqsa Martyrs Brigades. They wanted no favors. Their conduct should worry Fatah leaders but unquestionably also the leaders of Hamas and Islamic Jihad. The young people of the new intifada renounce them and do not want to be associated with them, even when it comes to planning bigger and more complex operations than a stabbing attack.

It looks like the attacks will intensify, becoming more sophisticated and deadlier. The IDF has no choice but to reassess the situation and close off most of the West Bank as it did during the second intifada. To fight the intifada one needs to fight back, which may come at a price that we know only too well: to wit, the potential collapse of the PA. On the other hand, whether Israel applies military measures or artificially resuscitates Abbas’ regime, it is highly questionable whether the PA will be able to exist for long under its present format.

Israel cannot have it both ways, nor can it sit idly by in the hope that the intifada will simply go away on its own. It won’t. That is unless a significant diplomatic initiative takes place to provide the young people in the West Bank with a glimmer of hope.