Why the Damascus Gate is more important than ever

Over the past few months, East Jerusalem's Damascus Gate has become a focal point for young Palestinians seeking to kill Israeli security officers and to avenge their friends. 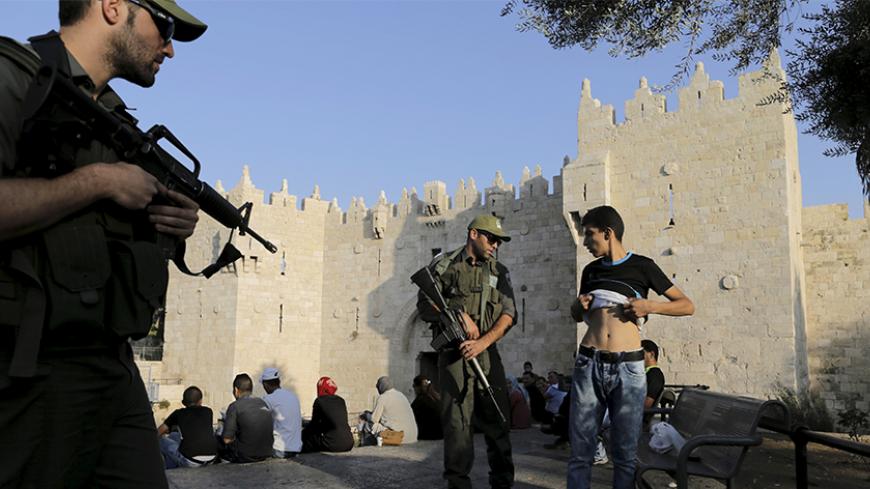 East Jerusalem's Damascus Gate has emerged as the hot spot in the current intifada. Hardly a day goes by without a security incident in its immediate vicinity, be it a successful attack or an aborted attempt. The most recent deadly attack at the gate occurred Feb. 3, when three Palestinians from Qabatiya and Jenin, armed with guns and pipe bombs, arrived to carry out a multi-casualty attack. They aroused the suspicion of border police officers, and in the ensuing engagement, servicewoman Hadar Cohen was killed, and a colleague was seriously wounded. On Feb. 15, a 15-year-old girl armed with two knives was arrested near the gate. A day earlier, two Palestinians opened fire with modified automatic weapons at a police squad being briefed at the site. The officers returned fire, killing both attackers.

Each previous intifada has had a place that became iconic in the eyes of the Palestinians. During the first intifada (1987-1993), it was the Jabaliya refugee camp in the Gaza Strip. To this day, Palestinians relate stories of heroism by the camp’s residents, who decided to rise up, an action that ultimately brought Israel to the negotiating table and the agreement to establish the Palestinian Authority. During the second intifada (2000-2005), the city of Jenin in the West Bank became a revered symbol after dispatching a number of suicide bombers to Israel. Back then, Israeli security officials called it a “hotbed for suicide bombers.” Jenin continued to “produce” suicide bombers even after Operation Defensive Shield in 2002.

So what has turned Damascus Gate into the hot spot for the current intifada? Why, despite being heavily guarded by police and military forces, has this area been attracting so many young Palestinians from East Jerusalem and the West Bank to carry out attacks?

Even before the outbreak of the recent wave of terror attacks on Oct. 1, Damascus Gate was on a normal day the most vibrant gate of the Old City. Thanks to the many restaurants and souvenir shops, it is usually a bustling area. It also boasts the best vantage point for viewing Al-Aqsa Mosque in all its glory. By virtue of being a place teeming with people, as well as a constant flashpoint between Jews and Arabs, Damascus Gate is being guarded by a much larger number of security forces compared with the Old City’s other gates. People in uniform — police, soldiers, border police and Yasam, the special patrol unit — have always been, and remain, the preferred target of assailants planning attacks.

Palestinians I have talked with are saying that the Damascus Gate was initially considered a natural spot for attacking security force members, because of their presence in large numbers. Now, however, in the wake of dozens of incidents and the large number of assailants shot and killed at the gate by security forces in a bid to scuttle attacks, Damascus Gate has turned into a “pilgrimage site” for young people seeking to avenge the deaths of their predecessors. Naturally, they have become revered "shahids”​ (martyrs). In other words, the Damascus Gate has become not only a place to demonstrate courage, but also a place for taking revenge.

On the social networks, Damascus Gate — in Arabic, Bab al-Amud (Pillar Gate) — has become a holy site. Young Palestinians post images of it, with and without photos of dead assailants, to which they add verses from the Quran or from contemporary poetry. These verses praise the “gate of bravery,” which will herald salvation and redemption, that is, the end of the occupation and the establishment of a Palestinian state with East Jerusalem as its capital. A Facebook page dedicated “in honor” of Bab al-Amud, which also features the photo of the slain Israeli policewoman as well as photos of the Palestinians who shot and killed her, has received some 18,000 “likes.” Many other websites praise the “holy gate,” which, as the writers note, adds pride to the boldness of the shahids who “sacrificed their lives for the sublime cause.”

The Israel Defense Forces and security establishment are well aware that Damascus Gate has become a pilgrimage site for assailants from across the West Bank. Since the attack that killed Cohen, who had just finished basic training, only experienced officers are being deployed in that area. In addition, police and border police forces from all districts across the country have been assigned to Damascus Gate.

According to an Israeli security source, all the forces undergo training to provide them with effective and proven tools to quickly identify a young man or woman intending to mount an attack. Following a recent assessment of the situation by the defense establishment, and especially after the attack in which Cohen was killed, it was decided to pursue a strategy of “containment.” In other words, so long as the stabbing attacks are being perpetrated by young, unaffiliated and inexperienced assailants, all that is required is the deployment of trained and qualified troops. There is no need to further beef up security at Damascus Gate. Setting up roadblocks and electronic checkpoints would not only severely damage tourism in Jerusalem, but would also have diplomatic and psychological ramifications. Separation roadblocks in the Old City in general and at Damascus Gate in particular could be construed as the de facto partition of the city.

At this stage, as long as the intifada largely remains knife attacks by lone attackers, the defense establishment prefers to take calculated risks, harsh as the price being paid might be. Dividing “united Jerusalem,” so it appears, comes with a much stiffer price.