Why IDF favors carrots, not sticks for West Bank Palestinians

IDF experts disagree whether Israel should increase pressure on the Palestinian Authority and apply punitive measures or whether it should increase incentives to calm the situation on the ground. 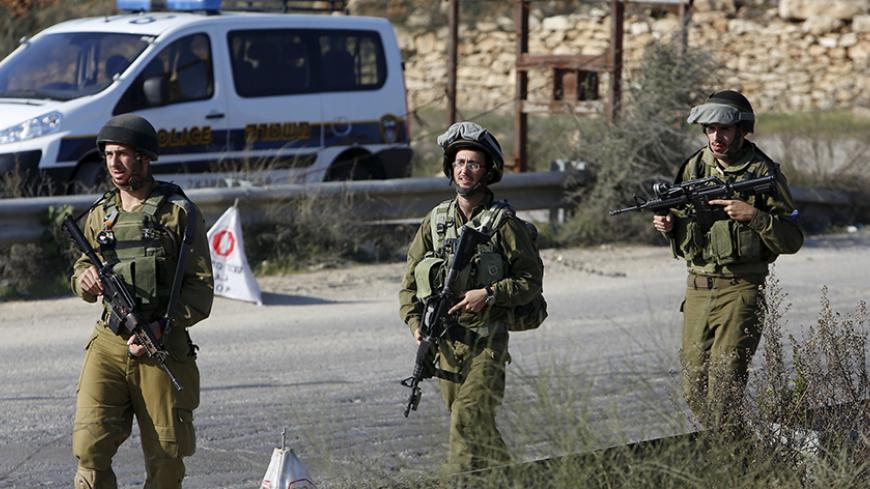 Israeli soldiers patrol near a checkpoint in the West Bank village of Sae'er, near Hebron, Dec. 11, 2015. - REUTERS/Mussa Qawasma

Ostensibly, the statement released by the Shin Bet regarding the investigation findings of the Palestinian minor who killed Dafna Meir in the Otniel settlement on Jan. 17 was a standard one. The 15-year-old terrorist from the village of Beit Amra close to Hebron was apprehended the day after the killing at his home in the village. He succeeded in infiltrating Otniel and escaping without interference; the Shin Bet got to him within 24 hours.

What was unusual this time, was that the Shin Bet released details about what triggered the Palestinian youth to perpetrate the attack. "The interrogation by the Shin Bet revealed that prior to the deadly attack, the minor had watched Palestinian TV broadcasts that portrayed Israel as the ‘killer of Palestinian youths.’ In addition, the interrogation revealed that on the day of the assault, and under the influence of the contents to which he had been exposed on Palestinian TV, the minor decided to carry out a stabbing attack with the goal of killing a Jew. In light of the proximity of the Otniel settlement to his residence, the minor decided to carry out the terror attack in Otniel."

This was, seemingly, a routine announcement. But in actuality, every word in the statement was carefully crafted. The statement emphasized and repeated the fact that the boy had been incited by Palestinian TV to kill Jews.

On Jan. 20, the Israeli media had publicized data about a study conducted by experts from the Coordinator of Government Activities in the Territories (COGAT). According to this study, incitement is not the main impetus that causes young Palestinians to kill Jews and lose their own lives in the process. The COGAT study exhibits data that is far more nuanced, with numerous characteristics and variables that point to a picture that is far less definitive than the one portrayed by the Shin Bet. It has emerged that not all the terrorists watch Palestinian TV. In general, the official Palestinian TV stations have low ratings, with almost no youths watching. Instead, Palestinian youths are mainly active on social networking sites. They often carry out assaults to avenge the death of a family member or friend, while at other times they are in the throes of a psychological crisis. (For example, on Jan. 23, a 13-year-old Palestinian girl who had an argument with her family took a knife and attacked an Israeli security guard in the Anatot settlement as a way of committing suicide.) At other times, the lone wolves are egged on by an external event or they are seized by a sudden rage that causes them to do something that will evidently lead to their deaths.

Behind the scenes, a difficult confrontation is being waged within the Israeli security system in regard to how the current terror wave should be fought and what causes its eruption. Meanwhile, the terror attacks have been ongoing since Oct. 1.

While Prime Minister Benjamin Netanyahu and almost all his ministers and spokespeople hurl scathing accusations at the Palestinian Authority (PA) and President Mahmoud Abbas for the continued incitement broadcasts of the Palestinian media outlets, there are also other voices in the security system. These other views are personified and espoused by Maj. Gen. Yoav “Poli” Mordechai, coordinator of COGAT, and his people.

The Shin Bet and COGAT approach the same issue from different perspectives: The Shin Bet examines the events from what is called in Israel “the thwarting perspective” — a narrow, subjective and localized view that only focuses on preventing the next terror attack, and nothing else. Those at COGAT, on the other hand, attempt to decipher Palestinian society to understand the prevailing state of mind, the deeper currents, the youth and the trends that ultimately determine the way in which the Palestinian winds are blowing.

The COGAT findings are not always compatible with those of the Shin Bet. While COGAT preaches that Israel should continue to allow entry to as many Palestinian workers as possible, the Shin Bet cautions against this openness and prefers to limit entry. At this stage, the opinion of Chief of Staff Lt. Gen. Gadi Eizenkot is closer to those of COGAT than those of the Shin Bet. Eizenkot uses every opportunity to warn about the potential security deterioration in Judea and Samaria and that it is vital to continue to operate with great restraint, using the carrot (as opposed to the stick): the continued employment of 120,000 Palestinian workers in Israel and the settlements, continued security coordination with the PA security apparatuses and continued economic cooperation, including as many incentives as possible to the Palestinian economy.

At this point, these two different approaches are clashing on the highest Israeli levels. The terror continues unabated; last week on different occasions young Palestinian terrorists infiltrated three settlements (Otniel, Tekoa and Beit Horon) and succeeded in killing two women and wounding others. The Israeli security top brass are at a loss.

Netanyahu finds himself in a Catch-22 situation. Israel’s “Mr. Security” is currently unable to restore a semblance of security to the streets in general, but especially not to the Judea and Samaria settlements where part of his constituency is concentrated. In his frustration, Netanyahu vents his anger on the PA and on anyone else who gets in his way. The last one to be on the receiving end of his ire was UN Secretary-General Ban Ki-moon who said Jan. 26 in regard to Palestinian terror, “It is human nature [for oppressed peoples] to react to occupation.” Netanyahu subsequently slammed the secretary-general's statement and said it encourages terror.

Many Israeli security officials view Netanyahu’s criticism against the PA as irrelevant and unjustified. “First, there has been a noticeable decrease in the incitement levels of the official Palestinian media outlets,” a high-placed security source told Al-Monitor on condition of anonymity last week. “Second, security coordination has improved a great deal, and the Palestinians are working indefatigably to thwart terror attacks.”

Quite a number of Israeli security officials say, in private conversations and only on condition of anonymity, that the repeated attacks of Israel’s diplomatic top brass on Abbas and the PA is a terrible mistake. “The PA is under tremendous pressure,” an Israeli security source told Al-Monitor, “but Israel must do everything to allow Abbas to survive. The alternative is worse by far. He [Abbas] is committed to the war on terror, and that’s the important thing. We cannot expect him to condemn the attacks in the current terror wave that is backed by the entire Palestinian people, without exception. He can’t go against his people. We must understand his limitations.”

At this stage, Eizenkot and Defense Minister Moshe “Bogie” Ya'alon are succeeding in maintaining stability and averting the attempts of the Israeli far-right, mainly the HaBayit HaYehudi faction, from intensifying punitive steps in the territories that could lead to a further deterioration of the situation. The problem is that this situation is temporary; continued terror strengthens the forces that push for harsher punitive measures, which in turn are likely to cause an escalation of the situation, and even loss of control.