How Palestinian media contributes to cycle of incitement

Young Palestinians are being influenced by misleading video clips aired on the PA's official TV network, presenting those who attack Israelis as victims. 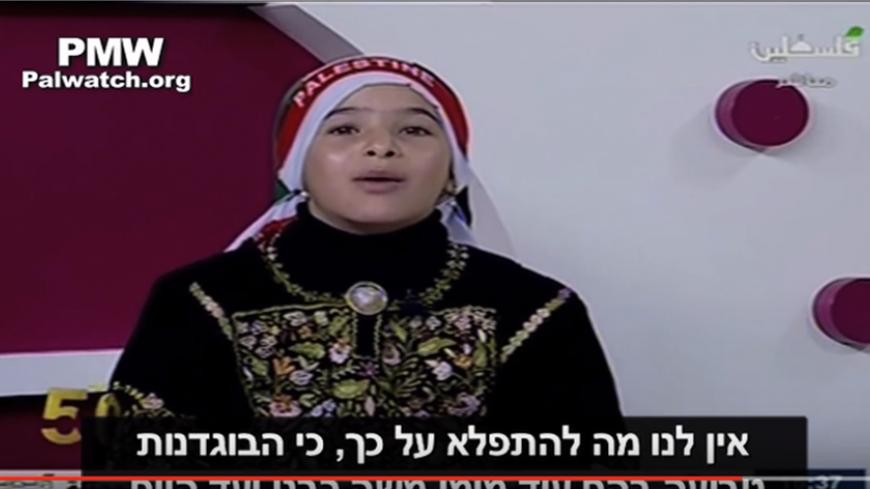 A young Palestinian girl tells of how the Palestinians were expelled from their land, Jan. 17, 2016. - YOUTUBE/PMW Hebrew

The Shin Bet has released a report regarding the interrogation of Morad Adais, who was responsible for the attack in the Othniel settlement, where Dafna Meir was killed in front of her children. The interrogators learned that Adais had decided to stab Jews after watching Palestinian television. If there was ever any need for empirical evidence of the impact of the Palestinian media and the way that it encourages young Palestinians to follow in the footsteps of other "martyrs," this teenage Palestinian terrorist provided it.

Any amount of time watching the main Palestinian television networks leaves no room for doubt. All day every day, those stations broadcast edited video clips, incorporating audio and visual effects, dramatic music and enormous titles screaming out that the Zionists are murdering young Palestinians in cold blood. Some of them make an explicit call for vengeance.

One of these clips shown especially frequently on Palestinian television this week features the corpses of those responsible for attacks in Israel over the past few months. The clip ends with a shot of a bloodied knife and the words, “We swear to avenge the girl Roqaya Abu Eid,” the 13-year-old who was shot dead during an attempted attack in the Anatot settlement.

Another prominent video clip aired repeatedly on Palestinian television is only 35 seconds long, but in that time it features the bodies of various Palestinian attackers, including a close-up shot of 13-year-old Ahmed Mansara bleeding after he committed a terror attack in the settlement of Givat Ze’ev in October 2015. The soundtrack throughout the clip includes heavy gunfire, while blood-red supertitles declare, “The Zionist occupation is killing the shebab [young jihadi fighters] in cold blood!” Mansara was wounded and hospitalized in Israel, not executed, as claimed by President Mahmoud Abbas.

None of these tendentiously edited video clips gives any indication that these martyrs tried and often succeeded in hurting people before they were shot.

Other broadcasts focus on the nature and character of the “murderous Jews.” For example, official Palestinian TV showed a young girl reciting a story about how the Palestinians were expelled from their land. The story ended with the words, “There is no reason to be surprised. Treachery has been engrained in them from the days of Moses until now. May Allah pay these abusers back for all they’ve plotted. Now say with me, ‘Amen!’”

The Odeh Network, run by Fatah, regularly airs an incendiary song calling for murder. “Drown the Israelis in the Sea of Blood,” sings the artist from the safety of her recording studio. Nothing more needs to be said.

There is more than what the Shin Bet and Israel Defense Forces call “brainwashing clips” being broadcast on Palestinian TV. Their news reports also distort reality. The average Palestinian who watches Palestinian TV news does not know that the stories they see about young victims, men and women alike, often involve people who were committing violence. Such was the case with Hussein Abu Ghosh and Ibrahim Allan, who stabbed Shlomit Krigman to death Jan. 25. Palestinian Media Watch, an Israeli organization that monitors Palestinian media, among other things, distributed the Palestinian report of the incident among Israeli journalists. It read, “Two young people were martyred when they were shot by the occupation forces, claiming that they were involved in a stabbing in a settlement west of Ramallah. … Israel claims that the two stabbed several settlers in that settlement," and "The occupation forces stormed the settlement and murdered them in cold blood this evening.”

In an article for Al-Monitor this week, I noted how it seems that ever since the current uprising began, there has been no honing of policies, nor have any lessons been drawn to change operational assumptions. As a result, during most events, no procedures have been followed to stop the assailants in a nonlethal manner, even though some of them could have probably been neutralized quite easily without having to kill them. This is apparently the result of the mistaken notion that killing assailants serves as a deterrent to others.

It would seem that the incendiary video clips and reports of "cold-blooded killings" that feature on Palestinian television are the result of Israel’s trigger-happy policies. Nevertheless, it is impossible to absolve Palestinian TV of all responsibility, especially when it comes to the Palestinian Authority’s official television network in Ramallah that encourages Palestinians to commit attacks in Israel, and even to die.

There is no reason to expect anything different from Hamas' Al-Aqsa Network. Even under normal circumstances, the network, which broadcasts from Gaza, tends to air encouragement for attacks and video clips edited to glorify the organization’s military wing in an effort to set off another intifada in the occupied territories. Nevertheless, it is the television broadcasts in the territories controlled by the PA, and especially those of the PA’s official network (which is partially funded by donations from foreign governments such as the European Union, the United States, Japan, Norway and Arab nations) that bears responsibility for sending young Palestinians to their deaths.

In the past, Abbas reportedly ordered that the content of television broadcasts be supervised and that the networks remove what Israel calls “unrestrained incitement.” In practice, however, there is no such restriction.

The steady flow of edited clips featuring armed Palestinians, casualties and children, with all their special effects, create a mass of content designed to convince viewers to get up and do something to save their people from the mass executions perpetrated by the “Zionist enemy.”

The television anchor on the PA's official channel took it a step further by warning viewers that they should be extra cautious, because they could be killed at any moment. According to her, the “Zionist enemy” has no qualms about using every means, including lies, at its disposal. After they kill, the perpetrators blame their victims for things they never did.

What has been happening on Palestinian television these days is snowballing. Young people heavily influenced by the daily stream of brainwashing set out to commit terror attacks, and newscasts featuring photos of their bodies the next day inspire the next round of young people to avenge their “cold-blooded murder.” And the cycle repeats itself.

This week, the chairman of the umbrella settlement organization the Yesha Council, Avi Roeh, demanded that Prime Minister Benjamin Netanyahu block Palestinian TV broadcasts as long as the incendiary programming continues. The problem is that blocking the broadcasts is impractical. It is naive to think that in today’s world, with social networking and information flowing freely, blocking a TV channel would actually solve the problem.

Morad Adais stabbed Dafna Meir to death in front of her children after watching such material. It was easy to incite him with inflammatory messages, given the complex reality that now exists in the West Bank. To really end the intifada once and for all and stop the cycle of bloodshed, it will first be necessary to make some complex decisions, and not necessarily military ones.