Is Palestinian public leaving its leadership behind?

Both Fatah and Hamas are facing a crisis as they know that engaging in a new intifada will destroy their rule in favor of the independent young generation. 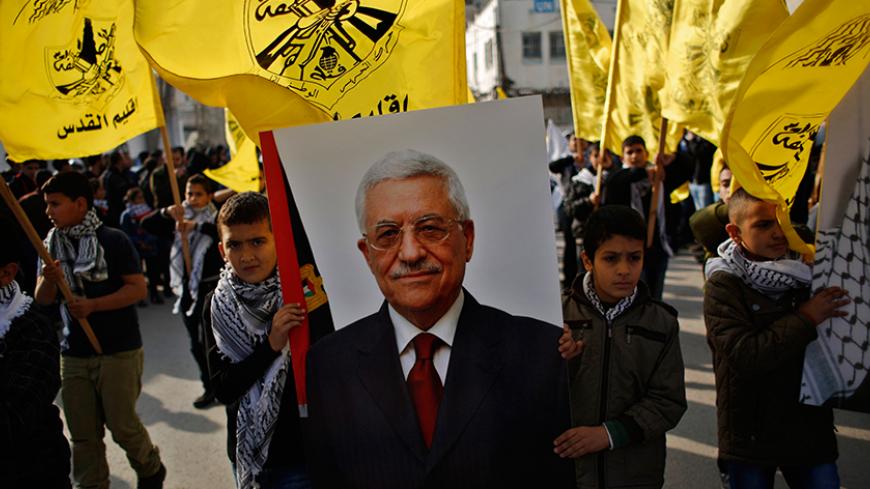 Palestinian boys carry a poster depicting Palestinian President Mahmoud Abbas during a rally marking the 50th anniversary of the founding of the Fatah movement, at Qalandia refugee camp near the West Bank city of Ramallah, Jan. 1, 2015. - REUTERS/Mohamad Torokman

In the wake of the Oct. 1 attack in Samaria, where Naama and Eitam Henkin were murdered — after which the current wave of terror in Israel broke out — I held talks with several senior Palestinian security officials as well as with a host of veteran Palestinian journalists from the volatile city of Hebron. Everyone was certain beyond any shadow of a doubt that despite the swelling frustration and despair in the West Bank, the people were too weary to embark on a third intifada. One senior Palestinian Authority official told Al-Monitor on condition of anonymity, “If [President] Mahmoud Abbas doesn’t want an intifada, there won’t be an intifada.” He was basing himself on the assumption that even if the Palestinians do not like Abbas, the security agencies and the Palestinian establishment have the ground under their firm control. Appearing to make sense and sounding substantiated, those arguments were cited in Al-Monitor's piece titled “Will there be a third intifada?”

Today, in the wake of three very bloody weeks and dozens of attacks and attempted attacks it is abundantly clear that the people on the ground are speaking a different language and do not adhere to the wishes of senior PA officials who have pulled out all the stops to avert a violent uprising. Indeed, in contrast to the second intifada, there are no mass demonstrations throughout the West Bank but rather a small number of confined clashes with Israel Defense Forces troops at flash points. However, the number of terrorists who committed stabbing or vehicular attacks this past month is similar to the number of attacks during the entire second intifada, which was instigated and supported by the Palestinian organizations.

Most of the perpetrators of the stabbing attacks hail from East Jerusalem, yet their actions inspire young people from the West Bank. As a result, a rise in violence across the Green Line has been observed in recent days. Despite feeling confident about their level of control, senior political and security PA officials now realize that they were wrong not only in this assessment, but also about the assumption that the Palestinian public heeds the calls of Abbas. Even in their most pessimistic assessments, they did not foresee an intifada erupting before their eyes and the Palestinian public leaving them behind.

On Oct. 21, Al-Monitor contributor Hazem Balousha wrote an article explaining why Hamas wants an intifada. A source in the organization told Balousha that the movement was interested in an uprising in the West Bank but would rather see it conducted without the movement’s involvement. The argument the source cited was that Hamas was temporarily curtailing its armed activities to avoid an Israeli crackdown on the nascent intifada. Yet, saying “curtail its armed actions temporarily” is a baseless statement because since the end of Operation Protective Edge in August 2014, Hamas has not initiated any offensive actions against Israel. Furthermore, it has actually been taking vigorous action against radical elements in Gaza that are trying to fire rockets at Israel.

Hamas, as has been extensively reported, is more interested in having a long-term agreement with Israel than engaging in another armed conflict, which could bring about the movement’s collapse. This is the reason why the organization pushes for an intifada but does not want to take part in it.

Hamas finds itself between a rock and a hard place. On one hand, if its militants actively join the brewing intifada, Israel will strike them mercilessly. On the other, as a resistance movement, it cannot afford to lag behind and lose its status as the champion of the armed struggle against Israel. The solution chosen is to speak in favor of an intifada and make blustery speeches against Israel while letting others do the work.

Senior PA officials, too, are in a bind, yet their situation is far more complex and dangerous. By now everyone understands that the PA has lost touch with the public. If Abbas’ administration tries to join the cycle of violence — even if only partially — Israel could crush the PA. By contrast, if senior PA officials try to suppress Palestinian violence, they will have to pay a stiff personal and political price.

Despite the fact that the uprising is indeed aimed at Israel, it is to a great extent also a loud and clear call of defiance against the PA, its senior officials and activists, but mainly against Abbas. This week, I called a number of senior Fatah and PA officials to hear their assessments and analyses of the situation. For the first time in many years, they all dodged me, giving a variety of excuses. One senior PA official told me, rather amusingly, “At this time I do not want to talk about politics, but if you would like to talk about other things, be my guest.”

Whereas Hamas leaders have found a middle-of-the-road approach and are taking part in the current uprising through words only, PA leaders cannot afford to do even that much. Fatah militants and Tanzim (Fatah's armed militia) leaders have tried organizing demonstrations in the West Bank, but very quickly had to toe Abbas’ line and cease those efforts. On Oct. 11, Abbas met with Tanzim chiefs, imploring them to calm the atmosphere.

PA officials understand full well that if the situation shifts from stabbing attacks by so-called lone wolves to mass demonstrations and full-blown clashes, the PA will descend into chaos whose outcome nobody can predict. What this means — and this concern is shared by senior Palestinian political and security officials alike — is that the PA could collapse and they could lose their jobs, influence and standing and be replaced by a new, grassroots leadership. Abbas’ associates are concerned that all they will be remembered for by their own people is security cooperation with Israel, or as they are derisively known in the territories, "ta’amul" — collaborators.

The largest Palestinian national movement — Fatah — finds itself in one of its greatest crises. Its leaders and activists understand that any action they take has serious consequences. Abbas, Saeb Erekat and Jibril Rajoub as well as Tanzim leaders are trying to curb the escalation and get the situation under control, while minimizing the damage to their image in the eyes of the Palestinian public. If they fail, this could herald the end of the Fatah movement, at least in its present format.