51 years after its founding, where is Fatah heading?

The Fatah movement is torn between the moderate forces and those who wish to reignite a violent confrontation with Israel, 51 years after its establishment. 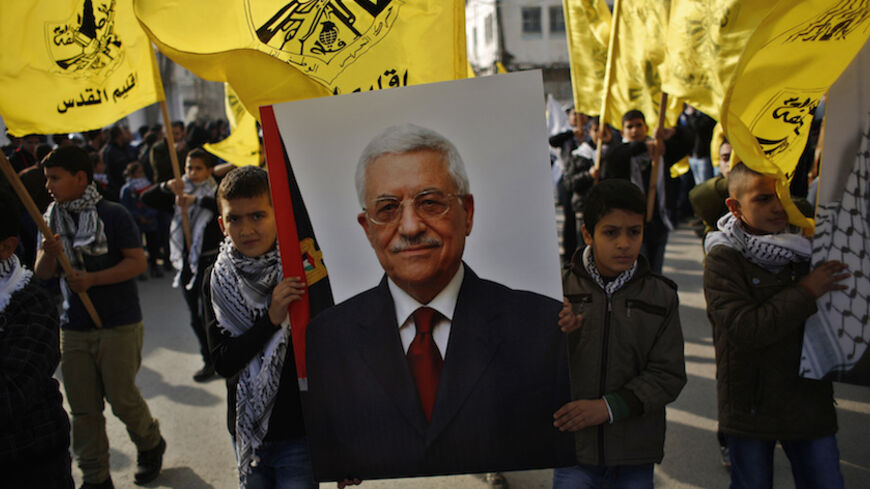 Palestinian boys carry a poster depicting Palestinian President Mahmoud Abbas during a rally marking the 50th anniversary of the founding of the Fatah movement, at Qalandia refugee camp near the West Bank city of Ramallah, Jan. 1, 2015. - REUTERS/Mohamad Torokman

Two posters that were prepared by Fatah to mark the movement's 51st anniversary precisely convey the bitter controversy taking place in the movement today.

One of the posters, designed by supporters of Palestinian President Mahmoud Abbas, displays the pictures of late PLO leader Yasser Arafat and Abbas alongside the number 51 while a white dove hovers above the Palestinian flag and Al-Aqsa Mosque. At the bottom of the poster it reads, “A promise is a promise and a vow is a vow.”

The second poster, disseminated by another Fatah faction, uses different images and language to appeal to activists who have been disappointed by Fatah’s direction in recent years. The white dove symbolizing a peace agreement with Israel is replaced on this poster by a map of Palestine that includes the entire territory of the State of Israel. Just in case there is any doubt regarding the direction in which the movement is headed, the poster reads, “Long live the day of the founding of the Fatah power [movement].”

The first terror attack that a Fatah cell tried — unsuccessfully — to perpetrate was on Jan. 1, 1965, on Israel’s National Water Carrier. In fact, Jan. 1 is the anniversary date that Fatah chose to celebrate the founding of the movement, even though the movement had already been established on Oct. 10, 1959, in Kuwait. Fifty-one years later, 2016 will be the movement’s watershed year. Fatah founded Palestinian nationalism and led it almost to the establishment of a Palestinian state in the 1967 borders.

The signing of the Oslo Accord in 1993, internecine Palestinian struggles (Hamas-Fatah) and the diplomatic confrontation with Israel generated a large crisis in Fatah, causing the movement to lose the great support it once had garnered on the Palestinian street. Most of the youths in the West Bank and Gaza Strip have given up on it, in light of their disappointment at Arafat's and Abbas' regimes. They claim that the national Palestinian movement is tainted with corruption and cares only for its higher-up top brass, not its citizens.

Vast ideological differences of opinion splinter those who still remain faithful to the aging Fatah movement. The split revolves around the critical question of where Fatah is heading in the post-Abbas era (if and when this moment arrives).

The situation on the ground that Israel has created in the territories has convinced even the greatest Palestinian optimists that the “two nations for two states” formula is almost not feasible. No Fatah activist believes that an arrangement can be reached with Israel in the coming years — in other words that Israel will withdraw to the 1967 lines, will concede parts of Jerusalem and that a Palestinian state can be established through a peaceful agreement, side by side with Israel. This is the starting point of the dispute between the Fatah camps.

One camp has not yet given up on reconciliation with Israel; these are mainly the movement’s senior leaders, field activists and the middle generation that had experienced incarceration in Israeli prisons. This camp is called the “reconciliation camp” (some derisively call it “the naive camp”), which includes Jibril Rajoub, Qadura Fares and Hussein al-Sheikh. They know that an armed conflict with Israel will not bring about practical results, or to be more precise will lead to a catastrophe.

They feel that action must be taken in two parallel spheres: One is to follow Abbas’ lead who tried to declare a Palestinian state in the United Nations, and operates via diplomatic channels within the international community. The second sphere is to continue to appeal to public opinion in Israel with the hope that the day will come when the Israelis will “come to their senses.”

These forces, which constitute the majority of the Fatah movement, are also convinced that the global boycott, divestment and sanctions movement will do its share and help convince the citizens of Israel that the right-wing policy of territorial annexation and massive construction in the settlements will do them no good.

By contrast, the second camp feels that Israel only understands the language of brute force. This faction believes that the two-state solution is no longer feasible, since Israel has done everything in its power to make sure that it can’t be implemented. Therefore, they say, let’s return to the pre-Oslo days and the original Fatah vision of “Palestine, from the [Mediterranean] sea to the [Jordan] river” — in other words, the entire territory of Palestine (and Israel) belongs to the Palestinians.

The supporters of this approach are usually part of the "diaspora" faction: movement leaders and activists who hail from the Palestinian diaspora. These include, for instance, Sultan Abu al-Einein, Jamal al-Tirawi and Jamal Abu-Leil. They were born and bred on the ideology that Israel is an alien corn that needs to be uprooted, and this was, indeed, the reigning approach in Fatah and the PLO until the signing of the Oslo Accord. Now, in light of the despair in the West Bank territories and the Gaza Strip, and the assessment that a diplomatic solution with Israel is no longer in the cards, they want to re-create the good old days. How do they intend to implement the new-old vision? Bitter controversy surrounds this issue as well. Should the Fatah movement, in other words the Tanzim (field activists), join the third intifada? Or instead, should they accept the movement’s current verdict and sit on the fence, twiddling their thumbs and waiting for the moment when their leaders will say, “Enough is enough!”?

This debate regarding the outlook of Fatah and the movement’s future prospects is taking place in a period of bitter disappointment. Most of the Palestinian public is disillusioned regarding the functioning of their leader, Abbas, and the entire path of the Fatah movement. Much has been written in recent weeks about the lone-wolf intifada taking place since October. All the attackers went to carry out terrorist acts against Israelis, but simultaneously expressed strong protests toward the Palestinian Authority and the Palestinian movements on the ground — Hamas, Fatah and the Islamic Jihad.

Fatah’s top brass are well aware of the public mood. They also know that the Fatah movement will find it very difficult to reconstruct its former days of glory, and it must rehabilitate itself wisely and judiciously if it wants a new lease on life.

The 51st year of the Fatah movement will not be an easy year. This will likely be Abbas’ last year in power. But whether he goes home in the course of the coming year or continues to flounder in his position as president, the struggle within Fatah will continue to shake up the movement. If Abbas makes good on his threats and actually quits, the odds are that Fatah’s activist camp that wants to return to armed resistance will stop sitting on the fence. They will get off the fence even if Abbas’ successor will hail from the “reconciliation camp.”

This struggle, currently taking place only in the PA territories in the West Bank (Gaza is ruled by Hamas and Hamas is dealing with other, more acute problems right now), should be followed with great interest by Israel’s decision-makers on the diplomatic-security level. Next year marks the 51st year since the inception of Fatah, the movement of “non-partner” President Mahmoud Abbas, as several Israeli politicians have labeled him. And 2016 may very well be the last year in which pragmatic forces control the Fatah movement. All the other options on the ground do not promise a better future, no matter which way you look at it.