Israeli sources estimate that by delivering a fiery speech before the Palestinian Central Council in which he promised to cut security coordination with Israel, Palestinian President Mahmoud Abbas cornered himself with promises to his people that he cannot fulfill. 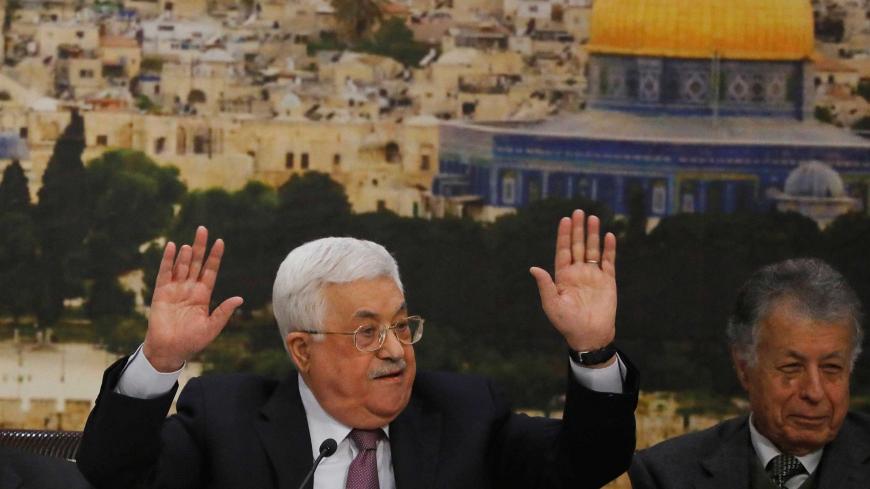 Palestinian President Mahmoud Abbas speaks during the meeting of the Palestinian Central Council in the West Bank city of Ramallah, Jan. 14, 2018. - REUTERS/Mohamad Torokman

On Jan. 15, the Palestinian Central Council (PCC) adopted a decision calling on the Palestinian Authority (PA) to suspend its recognition of Israel until Israel recognizes an independent Palestinian state, abrogates its 1967 annexation of East Jerusalem and stops settlement construction in the West Bank. In the final communique of the two-day council meeting, representatives also called on the PA to stop “all forms” of security coordination with Israel and turn its back on the Paris Accord — an annex of the 1993 Israeli-Palestinian Oslo peace agreement that regulates the economic relationship between the two sides. All Palestinian commitments under the Oslo Accord, they said, are “null and void.”

On Jan. 14, the first day of the meeting held in the West Bank city of Ramallah, Palestinian President Mahmoud Abbas delivered a fiery speech to the 86 delegates representing all Palestinian movements that make up the PLO. He described in despair what everyone knew: The PLO and PA are facing a dramatic watershed moment. “We will not make the mistakes of the past — of 1948 and 1967 — again,” he said, referring to the two wars between Israel and Arab states (where Palestinians fled from their homes). “We will stay here and not move. We are at a crucial crossroads, and our future is at stake,” he said.

The PCC was convened following US President Donald Trump’s Dec. 6 announcement recognizing Jerusalem as the capital of Israel and announcing plans to move the US Embassy there from Tel Aviv. However, the sense of urgency in convening the session was born of the understanding that the era of negotiations with Israel was over. The Fatah movement, which is the dominant force within the PA, had totally lost the support of the Palestinian street. Its way had failed and alternatives must be found at once.

The question raised by all participants was whether there was a new path that had not been tried in all the many crises with Israel since the signing of the 1993 accords. Is there a way to call off the agreements — which defied expectations of resulting in a Palestinian state and only worsened the economic circumstances of its people — and still preserve the structure of the PA and its institutions? Neither hawks nor doves had good answers to those questions.

The PCC decisions will now be put before the PLO’s Executive Committee, which is empowered to carry them out. Still, they will probably quickly be exposed as empty threats. The PA is in a bind. It cannot exit the Oslo Accord and survive.

According to the source, who spoke on condition of anonymity, Abbas and the PLO representatives who adopted militant decisions know full well that their recommendations are not feasible. “On the day the PA, backed by the PLO, decides to suspend recognition of Israel and cast off the Oslo and Cairo accords [another name for the economic agreements], it will collapse,” he said.

The PA’s entire structure and that of its security, economic and civilian institutions are based on the Oslo Accord. If Abbas decides to adopt the PCC’s recommendations, he will be signing the death warrant of his rule and of the PA he is heading.

Speaking with Al-Monitor, a Fatah movement source conceded that both the decisions and the tone of the two-day meeting were largely designed to buttress the support of the Palestinian public for the movement. Fatah, the largest component of the PLO, had reached a dead end. The Palestinian public had once again realized that Abbas’ policies of diplomacy and nonviolence toward Israel had failed, and the movement’s leaders knew they had to come up with a new diplomatic-political horizon.

The Oslo Accord promised a Palestinian state at the end of the diplomatic process with Israel. Today, 24 years after its signing, such a state appears further away than ever. The resulting despair has alienated the Palestinians — especially the young generations — from Fatah. Its leadership knows that support for Abbas is at its lowest ebb since he was picked to lead the movement following the 2004 death of PLO chief Yasser Arafat, which could explain the fiery speech he gave and the series of impractical decisions adopted by the PCC.

“Their main problem will arise in a few days or weeks, when the Palestinian public discovers that the decisions adopted with much fanfare are not being carried out,” said the Israeli security source. The most sensitive and problematic issue, he added, was the security coordination, which is not expected to stop. “What will Abbas tell his people then?” the official asked.

Israel’s security agencies do not believe a collapse of the PA is in the cards. “It’s not remotely likely,” said the official. However, a series of populist decisions adopted in the coming weeks or months under pressure and despair, and especially guided by considerations relating to the political survival of Abbas and the PA leadership, could result in a severe crisis of government in the West Bank.

For now, Abbas has already made one serious mistake in his struggle for survival that could cost him significant international support. In his harsh speech he claimed that various countries, mainly the United States and Britain, were complicit in the move to bring Jews to Palestine after the Holocaust because “they wanted to solve the Jewish problem at the expense of the Palestinians.”

Prime Minister Benjamin Netanyahu pounced (justifiably) with glee on Abbas’ comments. During his visit to India this week, he told reporters that Abbas had “revealed his true beliefs” and “helps us present the truth.” Netanyahu may well be right, this time.