The Palestinian Central Council called for ending security coordination with Israel in response to the US recognition of Jerusalem as Israel's capital, but it is a move the Palestinian leadership can hardly afford to make. 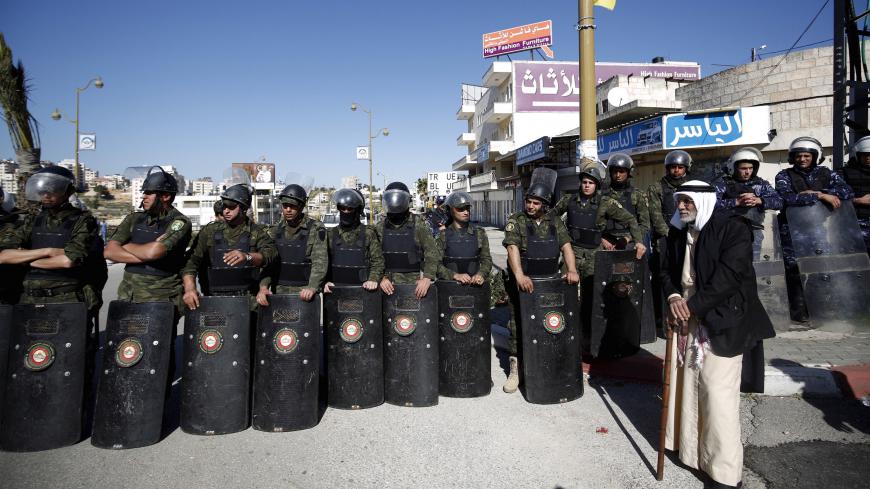 Members of Palestinian security forces stand guard during a rally in support of Palestinian journalist Mohammad al-Qiq, who was detained by Israel in November and was on a hunger strike to protest his detention without charge, in the West Bank city Ramallah, Feb. 26, 2016. - REUTERS/Mohamad Torokman

In a fiery two-hour speech at the start of the Palestinian Central Council (PCC) meeting Jan. 14, Palestinian President Mahmoud Abbas did not once raise the issue of ending security coordination with Israel. Abbas did, however, mention, several times, the futility of continuing with the Oslo process, which produced the Palestinian Authority (PA) and allowed it to set up its well-funded and lightly armed security apparatus. Despite this omission, however, the PCC resolved the matter in the final statement.

This was not the first time the Palestinians have resolved to end the security arrangement, a step often demanded by Hamas and other opposition groups. In March 2015, at the previous PCC session, a similar call was made but was never implemented. Abbas halted security coordination in July 2017 in support of protests in Jerusalem over the Haram al-Sharif, but the cessation was temporary, and cooperation was quietly resumed. This time it is being made in response to the decision by the United States to recognize Jerusalem as the capital of Israel.

An online survey by the leading Palestinian newspaper Al-Quds on the eve of the PCC session, revealed that an overwhelming 94% of Palestinians want the PCC to withdraw recognition of Israel and end security coordination. Despite such huge support among the Palestinian public, Palestinian leaders are concerned that fully implementing the recommendation would mean the end of the Palestinian government and possibly the loss of life of many of the current leadership if they were seen as allowing attacks on Israelis.

Israel is unlikely to sit idly by if the recommendation were implemented. Its tolerance for the existence of the Palestinian government, with its security apparatus, is contingent on the Palestinians adhering to the minimum level of security coordination.

Palestinians, as Abbas said in his speech, can argue that the Israelis on an almost daily basis violate the conditions of an agreement on the sanctity of areas under total Palestinian control. The Oslo Accord divided the occupied territories into three areas: Area A, primarily the populated cities, over which the Palestinian government has both administrative and security control; Area B, under joint Israeli-Palestinian control; and Area C, where Israel has administrative and security control. When the Israelis enter Area A without permission and arrest individuals, Palestinians say, they show the Palestinian security forces to be impotent and make them look subservient to Israel rather than sovereign within their own designated areas.

The last time security coordination ceased completely was during the 2000-2005 Al-Aqsa intifada, which basically ended after Palestinian leader Yasser Arafat’s death and the election of Abbas as president in January 2005.

This round, Abbas and his aides extracted a concession from PCC members in the form of a qualifier to the resolution calling for suspending recognition of Israel and ending security coordination. The clause calls for the resolution to be implemented by the Executive Committee of the PLO. With this qualification, the PCC gave Abbas a bit of room in which to negotiate or finesse how exactly the measure should be implemented so as to protect and safeguard the PA, as well as his own life and those of his aides and government.

PLO Executive Committee member Asaad Abdul Rahman told the Arab News on Jan. 16 that this issue had been part of a heated internal discussion. “There was no need to add that qualifier since all PCC decisions have to be implemented by the Executive Committee anyway, but in the end the leadership wanted a little bit of wiggle room during the implementation period.”

While Abbas and Majed Faraj, his security chief, might be able to tweak arrangements with the Israelis to maintain a low-profile security arrangement, there is no way they can reach any significant and serious new agreement that Israel would accept and that would adhere to the PCC's call.

Trying to renegotiate the Oslo Accord with the current Israeli government and with the current resident of the White House is unlikely to lead to any kind of breakthrough. The absence of a working US-European or US-UN relationship also makes the possibility of Abbas’ dream of P5+1 type negotiations practically impossible.

The shaky Palestinian government, which faces major economic as well as security challenges, would not be able to stay afloat if it implements the decision to part company with the Israelis on security. If Abbas and his team are serious about enforcing the decision, they will need to resign from their positions or take up residency outside of Palestine.

Totally ending security coordination is next to impossible in the Palestinians' current situation. Abbas and the PLO Executive Committee will have a very difficult time implementing this clause in the PCC resolutions without external assistance. At the least, the Palestinian security services will need to lower their coordination profile as much as possible, until they are able to negotiate a more acceptable agreement with the Israelis.