The Palestinian Authority has refrained from implementing the decision of the PLO to freeze its recognition of Israel ahead of US President Joe Biden’s visit to the region. 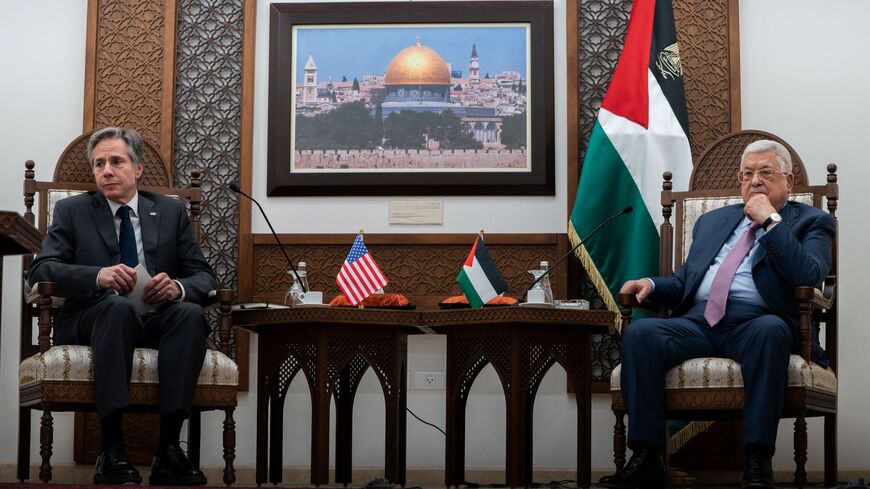 RAMALLAH, West Bank — US and Arab contacts have managed to prevent the Palestinian Authority (PA) from moving toward implementing some decisions made by the Palestinian Central Council (PCC) of the PLO regarding the relationship with Israel and the freezing of Israel’s recognition.

A source from the Fatah movement told Al-Monitor on condition of anonymity that a Jordanian delegation headed by Foreign Minister and Deputy Prime Minister Ayman Safadi met with President Mahmoud Abbas in Ramallah on May 31 and delivered a letter from King Abdullah II reiterating the kingdom’s commitment to joint cooperation on Palestinian issues.

Also, the source added, there were unannounced Egyptian contacts followed by a call from US Secretary of State Antony Blinken to Abbas on May 31. This, he said, led to the suspension of the implementation of some decisions related to the PA’s relationship with Israel.

The source pointed out that the Arab and US contacts are aimed at giving US President Joe Biden a chance to raise all issues of concern to the Palestinians during his upcoming visit to the region. He added that a delegation from the US State Department is scheduled to arrive in the region ahead of Biden to arrange for his visit.

President Abbas said during his meeting with Safadi that “the PA is planning to take measures aimed at confronting the Israeli escalation [in the Palestinian territories] amid the international community’s failure to compel Israel to comply with the international legitimacy resolutions, let alone put an end to its criminal and occupational practices and its ethnic cleansing and racial discrimination measures. This comes amid US silence on such Israeli provocations and practices that flagrantly violate international law.”

President Biden was scheduled to visit both Palestine and Israel on June 23, where he was to meet with Abbas in Bethlehem for the first time since he took office in 2021. Biden’s trip, however, has been pushed back until July.

The PA had informed Egypt, Jordan and the United States of its intention to implement the PCC decisions to freeze its recognition of the state of Israel as part of efforts to recover its image in the Palestinian scene, as well as to place pressure on the United States, Israel and the countries of the world in order to launch a political process that would be binding for Israel.

More than a year into the inauguration of the Biden administration, the PA feels frustrated and neglected by Washington. The PA is calling on the US administration to deliver on its promises, namely reopening the US Consulate in East Jerusalem, removing the PLO from the list of terrorist organizations, reopening the PLO office in Washington, and resuming financial support for the PA and the UNRWA, all the while placing pressure on the Israeli government to stop settlements and launch a political process with the Palestinians.

However, according to the Fatah source, “Not much hope is pinned on Biden’s visit, but we were asked to give it a chance.”

Domestically, the PA is losing popularity for several reasons. Chief among these is its inability to confront the Israeli attacks and incursions into the West Bank cities and the accompanying demolitions of Palestinian homes, killings and arrests. Add to this the PA’s ongoing relations and security coordination with Israel in the absence of a political process.

Also, Palestinians are facing a severe economic crisis caused by a significant rise in prices, the government’s inability to pay the employees’ full salaries, the spread of union strikes — the latest of which was held by teachers and engineers — and the decline of the PA’s leadership role in favor of the factions in Gaza, namely Hamas. This was evidenced by the reliance on Hamas instead of the PA in the response to the flag march that took place in Jerusalem in late May, not to mention Fatah’s heavy loss incurred in the student elections held at Birzeit University on May 18 to Hamas.

Meanwhile, the PA continues to monopolize the appointments to senior positions, as exemplified by Abbas’ decision to appoint on May 26 Hussein al-Sheikh as secretary of the PLO’s Executive Committee without referring back to the Executive Committee members.

For his part, Sheikh said in a press conference with Safadi on May 31 that the Palestinian leadership is in the last and crucial hours of making unprecedented strategic decisions related to the relationship with the Israeli government, and “our brothers and friends have been informed of this.”

He added, “We never want to take any step that would pose a threat to security and stability in the region, and we do not want to be forced to go there. … Our hands are still stretched out.”

Ahmed Majdalani, member of the PLO’s Executive Committee, told Al-Monitor, “In light of the ongoing Israeli escalation in Palestine, the international situation, the Western and US positions, the policy of double standards as far as the Ukrainian-Russian crisis is concerned, and the distinction between peoples who are entitled to defend themselves and peoples who are not, the Palestinian situation is no longer bearable, and there was an actual tendency to implement the PCC decisions.”

Majdalani pointed out that “the tendency to implement the PCC decisions is still on the table pending the meetings scheduled to be held next week with the US State Department team, and the concrete steps that the United States will put forth and deal with seriously and not just under the form of promises. But we may [make] the decision even before the visit.”

“I am personally not betting on the US administration, and I think that time cannot be wasted because the Biden administration is playing for time,” he said. “I think that we would need to assess the outcome of the US delegation visit to see whether it would be suitable to receive and meet with Biden or implement the PCC decisions."

Writer and political analyst Omar Helmy al-Ghoul told Al-Monitor, “Counting on the US administration would be a losing bet. This administration has made many promises but failed to keep any. Instead, it supported the Bennett government and condoned settlements and crimes under the pretext of fearing [Benjamin] Netanyahu’s return to power.”

Ghoul added, “There are [parties] in Jordan and some Arab countries who called behind the scenes and hoped that the PA would give Biden a chance ahead of his visit to the region, as did Blinken, who showed his administration’s seriousness to deliver on the promises he made, specifically reopening the consulate in Jerusalem.”

Ghoul added, “If the Biden administration is serious, it should walk the walk and give hope to President Abbas. I think it is time for this to be the last chance for the US, as the Palestinian people and even President Abbas can no longer tolerate the current situation.”