Is the PLO serious about suspending its recognition of Israel?

Questions arise as to whether the recent PLO’s Central Committee's decision to stop security coordination and suspend recognition of Israel will be implemented this time. 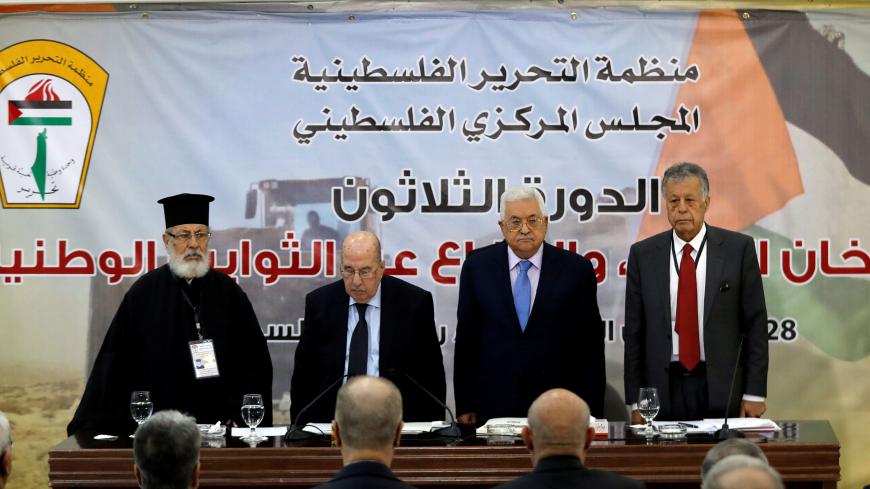 Palestinian President Mahmoud Abbas attends the meeting of the Central Council of the Palestinian Liberation Organization in Ramallah, in the occupied West Bank, Oct. 28, 2018. - REUTERS/Mohamad Torokman

The Oct. 29 decision by the Palestine Central Council (PCC) to suspend its recognition of Israel until the latter recognizes Palestine on the 1967 borders failed to attract much attention from Israel or the world. The resolution followed a hint in this direction made by Palestinian President Mahmoud Abbas in his Sept. 27 UN General Assembly speech.

The credibility of both Abbas and the PLO's various institutions, including the Palestine National Council (PNC) and the PCC, has been devastated ever since the Palestinian president and his security team failed to adhere to the May 4 decision of the PNC that had called for “the suspension of all forms of security coordination with Israel.”

When asked by Al-Monitor about the seriousness of the Palestinian leadership in carrying out its threats this time, half a dozen well-respected officials, experts and analysts all answered in the negative.

Hossam Ezzedine, a Ramallah-based political analyst, told Al-Monitor that he doesn't believe the Palestinian leadership will carry out the PCC decision. “If you read carefully the final communique of the PCC, you will notice that all the agreed-upon decisions have to be implemented by a special committee set up and headed by the Palestinian president. This is unusual because normally, the PLO's Executive Committee is responsible for implementing decisions of the PLO's top bodies.”

Majed Arruri, director of the Istiklal Institute for the Independence of the Judiciary and the Rule of law based in Ramallah, told Al-Monitor that the PLO is at its weakest point in years and that its leaders are not willing to risk their own survival and VIP privileges by taking as hard a decision as suspending recognition of Israel or ending security cooperation. “If the security cooperation ends, the Palestinian Authority [PA] will collapse automatically because it is not prepared to return to the place it was before the formation of the PA. On the ground, especially in terms of security coordination, we have heard these calls before, but they have not been implemented.”

In case security cooperation is halted, Israel would likely put Abbas under siege and could withdraw all travel permissions for Palestinian officials and stop turning over funds collected on behalf of Palestinians by Israel.

Khaled Abu Arafeh, former minister of Jerusalem affairs during the short-lived Ismail Haniyeh government, told Al-Monitor that the latest decision of the PCC comes at a time of unprecedented internal confusion. “Relations with the United States are thoroughly disturbed, and Israel's view of Gaza has been shaken up while the Palestinian leadership insists on refusing to offer Hamas any accomplishments.”

Arafeh said what is of importance is “the growing rift between the presidency and the PLO’s Executive Committee on the one hand and the Fatah parliamentary bloc on the other, and as result the idea of [further weakening] the Palestine Legislative Council was not agreed to.” The PLC is the PA's legislature, and Arafeh's statement reflects a real problem for the top Palestinian leadership that is not often spoken about.

Abu Zayyad conceded that this is the third time that Palestinian institutions have called for suspending the security coordination. But he argued that this time is different and that the decision by the PCC defending Palestinian rights will be implemented. “The Supreme National Committee headed by the president and which was chosen by the PCC is meeting to see how and when the steps should be taken according to the institution's recommendations.” A committee that includes PLO Executive Committee members, Cabinet ministers and influential leaders has been established to decide the best time and ways to implement the PCC decisions.

US State Department spokesman Robert Palladino, in an answer to a question about the PCC, said Oct. 30 that the United States has been following the Palestinian council's decisions. “We’re aware of reports that the Palestinian Liberation Organization’s central committee voted in support of suspending recognition of Israel. We’d also point out that we’re aware this is not the first time that the PLO central committee has made such a recommendation to President Abbas; we continue to urge all parties to engage constructively on how to build a brighter future for the Palestinians and Israel.”

For the time being, the attention of Israel and the United States is focused on the situation in Gaza and they are not paying much attention to Abbas or the PLO. They are unlikely to give credibility to the anti-Israeli calls of the PLO institutions until and unless they realize that the calls are serious and not simply a bargaining chip that Abbas wants to use to stay in power and to ensure that the status quo continues.