Palestinians frustrated by lack of follow-up after Biden visit 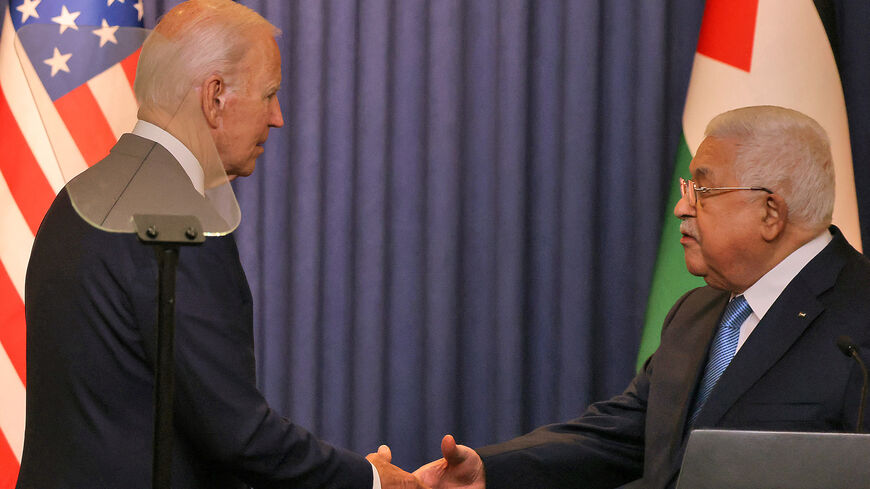 (L to R) US President Joe Biden and Palestinian President Mahmoud Abbas shake hands after their statements to the media at the Muqataa Presidential Compound in the city of Bethlehem in the occupied West Bank on July 15, 2022. - AHMAD GHARABLI/AFP via Getty Images

RAMALLAH, West Bank — US President Joe Biden’s visit to the Middle East failed to bring about any positive proposals for the Palestinians, and it was only limited to a one-hour meeting with President Mahmoud Abbas in Bethlehem on July 15.

Since coming to office in January 2021, Biden has yet to offer tangible political support to the Palestinians, be it by resuming the political process with the Israeli side or by delivering on the promises he had previously announced to reopen the US Consulate in east Jerusalem and reopen the PLO office in Washington.

On July 14, a day before the visit, popular demonstrations broke out in the West Bank and Gaza Strip in rejection of both the US policy that is seen as biased toward Israel and Biden’s visit — but the protests fell on deaf ears on the Palestinian Authority’s (PA) side.

Ali al-Ahmad, a student at Al-Quds Open University, told Al-Monitor that the United States, which declared itself the sponsor of the Israeli-Palestinian peace process for 30 years, provided support to Israel alone during that past period while turning a blind eye to all its violations. “So the fact that the PA was pinning its hopes on Biden’s visit is very weird in this context,” he said.

Nisreen al-Atrash, a student at Birzeit University, told Al-Monitor that Biden’s visit to the region has two goals: the first goal consists of renewing the US protection of Israel, defending Israel and ensuring that it has the upper hand, while the second goal consists of weathering the repercussions of Russia’s war on Ukraine while ensuring the provision of energy resources from the Gulf.

In an attempt to have the US administration offer political proposals, the PA threatened prior to Biden’s visit through political and media outlets that it would implement the decisions of the Palestinian Central Council (PCC) to sever relations with Israel and withdraw its recognition of the Israeli state. However, these threats have not materialized.

The most remarkable warning was issued by Secretary of the PLO Executive Committee Hussein al-Sheikh, who said in a TV interview on July 5, “If the US president’s visit fails, we will all be facing a predicament.” He added that “the Palestinians’ hopelessness in the face of the daily Israeli policy of escalation, abuse, killing, settlement and invasion can no longer be tolerated.”

Ahmed Majdalani, a member of the PLO Executive Committee, told Al-Monitor that during his visit, Biden failed to put forward any political initiatives, as he only repeated previous promises he had made to President Abbas during a phone call in May 2021 regarding his adherence to the two-state solution and support for the opening of a US Consulate in east Jerusalem and recovering bilateral relations.

“Those promises have yet to be delivered upon, as all the decisions made by the former Trump administration are still effective. The Biden administration has not backtracked on its recognition of Jerusalem as the capital of Israel, and it still supports the Abraham Accords and Arab-Israeli normalization. It also has yet to reopen the US Consulate in Jerusalem,” Majdalani said.

Majdalani stressed that Biden’s visit was a gain for Israel alone, as it provided it with something new exemplified by the Jerusalem Declaration, which covered political, security, economic and technological aspects.

Now that the visit is over, the Palestinian leadership seems to be more likely to lie in wait for a few months before making any decisions about its relations with Israel.

“There will be no Israeli government until November, which is when the US will witness midterm elections. Differently put, there will be no new political prospects in the next few stages,” Majdalani said.

Regarding the directions of the Palestinian leadership after Biden’s visit, Majdalani said, “We have two options. The first consists of fortifying the local front, while the second consists of developing popular resistance in the face of the occupation and executing the decisions of the PCC.”

He added that “before taking or executing any decisions, we ought to strengthen our local front by ending [the Palestinian] division, resuming the national dialogue and forming a government of national unity.”

But none of this seems to be imminent.

Khalil Shaheen, director of the Palestinian Center for Policy Research and Strategic Studies (Masarat), told Al-Monitor that the PA is back to waiting and noted, “We heard the PA threaten to implement the decisions of the PCC and Palestinian National Council (PNC) in the event Biden fails to present any political initiatives, but this is yet to materialize.”

Shaheen continued, “Following the visit, the PA adopted a different tone to find justifications for not implementing its decisions, namely ending its relations with Israel. This indicates that the PA gave the Biden administration an opportunity to implement what it promised.”

Shaheen noted, “The PA is surviving on financial aid in the absence of any political support. But the PA won’t be able to last long, as it won’t be long before it loses its legitimacy without a proper political process.”

While the political process was absent from Biden’s visit, the US president settled for announcing the launch of the 4G service in the West Bank, the improvement of conditions on the border crossings with Jordan to operate 24 hours, the promotion of economic growth, and the donation of $100 million to the East Jerusalem Hospitals Network (which includes the Makassed Islamic Charitable Hospital, Augusta Victoria Hospital, Red Crescent Maternity Hospital, St. John’s Eye Hospital, Princess Basma Rehabilitation Centre and St. Joseph’s Hospital).

Fadi al-Atrash, executive director of Al-Mutla’ Hospital in East Jerusalem, told Al-Monitor that the Biden administration resumed its aid to Jerusalem hospitals in 2020 after aid was halted during the Trump era.

In 2021, the US administration paid about $10 million to settle the debts owed by the PA, and this year it will pay about $14.5 million, he added.

Atrash added that Washington’s donation will pave the way for other countries to support hospitals in east Jerusalem, as he revealed that the United Arab Emirates has already pledged to donate $25 million, and that they are waiting for more donations from Arab and foreign countries in the coming period.

He pointed out that the details of the distribution of the $100 million aid to the six hospitals that are part of the East Jerusalem Hospitals Network have yet to be determined, but most of them will be allocated to development projects, and these matters will be discussed and coordinated with USAID.