Biden to open US Consulate in Jerusalem, restore ties with the PA

The US administration’s decision to reopen its consulate in East Jerusalem was welcomed by the Palestinians, as it paves the way for restoring ties between the United States and the Palestinian Authority, which deteriorated during the Trump era. 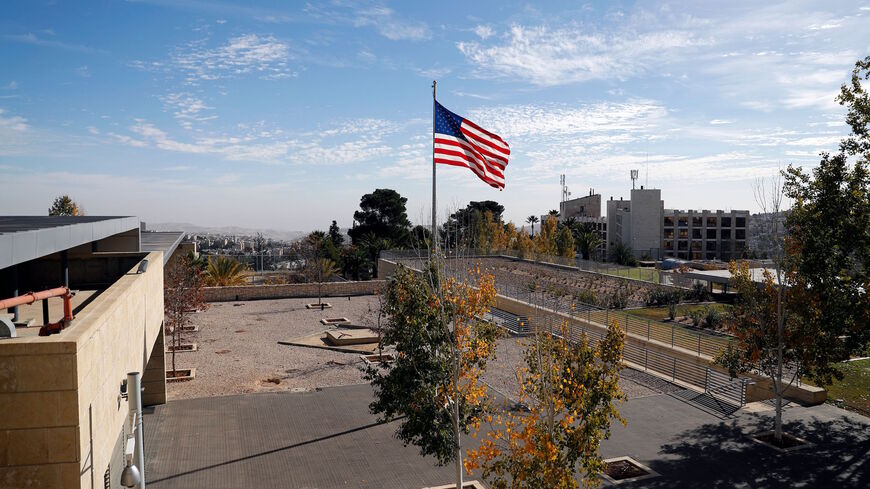 This picture shows a partial view of the US Consulate building complex in Jerusalem with the US flag flying, Dec. 12, 2017. - Thomas Coex/AFP via Getty Images

RAMALLAH, West Bank — The recent fighting in the Gaza Strip between Israel and the resistance factions prompted the US administration to take political and diplomatic steps in the region and to renew contact with the Palestinian Authority (PA).

On May 15, US President Joe Biden called his Palestinian counterpart Mahmoud Abbas, and US Secretary of State Antony Blinken visited Ramallah May 25.

In conjunction with these moves, the US administration took a number of decisions. Most notably, Blinken announced during his meeting with Abbas in Ramallah the reopening of the US Consulate in Jerusalem.

According to the official Palestinian news agency WAFA, Blinken affirmed the United States intends to reopen its Consulate General in Jerusalem. He noted the administration will ask the US Congress for $75 million in development and economic assistance for Palestinians, and would also provide $5.5 million in relief and $32 million in aid to the United Nations Relief and Works Agency for Palestine Refugees in the Near East.

Blinken underscored the US’ commitment to rebuilding relationships with the PA and with the Palestinian people. He did not, however, specify a date for reopening the consulate.

Before its merger, the US Consulate had overseen US diplomatic relations with the PA for more than two decades. The consulate’s reopening is therefore a step toward restoring US-Palestinian relations, after the rupture during the Trump administration.

At the Palestinian official level, the US decision was warmly welcomed. Member of the Fatah Central Committee Hussein Al-Sheikh told Palestine TV May 26 that the decision confirms the collapse of the US peace deal. He described it as one of the most important decisions taken by the new US administration and a clear message that East Jerusalem is part of the occupied territories in 1967. He further noted it constitutes a valid ground for restoring normal relations with the United States.

Meanwhile, Israel rejected the US move. Israeli ambassador in Washington, Gilad Erdan, told the Israel Broadcasting Corporation May 26 that Israel is not worried about the Biden administration’s desire to strengthen Abbas. “We have strongly opposed the reopening of the consulate in the municipal area of Jerusalem,” he, however, noted.

The PA hopes that the decision to open the consulate in Jerusalem will pave the way for additional decisions that contribute to improving bilateral relations. Ahmad al-Deek, political adviser in the PA Ministry of Foreign Affairs, told Al-Monitor, the decision confirms that East Jerusalem is part of the occupied Palestinian territory and is the capital of Palestine and will remain subject to final negotiations. He hoped the decision would be translated on the ground quickly.

“This decision is a step in the right direction. The Biden administration must fulfill the promises it made during the election campaign, including opening the PLO office in Washington,” he said. The PLO office was closed in October 2018.

On whether Blinken hinted at the steps that his country will take in the near future, Deek noted, “The efforts of the US administration are currently focused on consolidating the cease-fire in Gaza, opposing the eviction of families in the Sheikh Jarrah neighborhood, mobilizing the necessary funds and setting up a clear mechanism of action for the immediate start of reconstruction of the Gaza Strip.”

He added, “The US administration believes all the steps it is currently taking should lead to the revival of the peace process and negotiations between the Palestinian and Israeli sides."

Yet the US announcement was rejected by Palestinian factions and parties. Secretary-General of the Palestinian National Initiative, Mustafa Barghouti, told Al-Monitor, “The US administration’s announcement of reopening the embassy in Jerusalem is insufficient. The United States cannot play a mediating role in the peace process without ending its absolute bias toward Israel. The Biden administration should reverse the decision to recognize Jerusalem as the unified capital of Israel and transfer its embassy to Jerusalem. It should reopen the PLO headquarters in Washington and stop its efforts to split the united Palestinian ranks.”

Barghouti continued, “These moves are necessary if the United States wants us to see it differently. These moves, however, will not allow it to play a mediating role in light of its bias toward Israel. The last thing we will accept is resuming the sterile negotiations.”

Bassam Salihi, secretary-general of the Palestinian People's Party, downplayed the importance of any US administration move or decisions. He told Al-Monitor that in order to be serious, any US decision must include setting up a binding international mechanism to end the occupation according to a specific timetable.