Palestinians reacted positively to the US plan to fulfill one of President Joe Biden’s promises of reopening the US mission in Jerusalem, which will be providing services and a liaison to the people of Palestine. 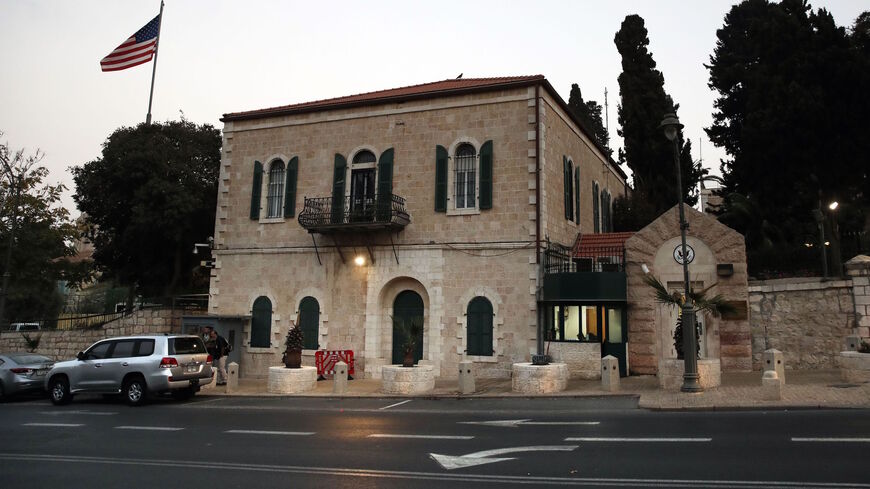 A picture taken on Oct. 18, 2018 shows the US consulate in Jerusalem. - Thomas Coex/AFP via Getty Images

When the zero hour for implementation arrives, it will be very easy to execute the reestablishment of a US Consulate in Jerusalem. The sign at the entrance of the Argon Street building will be changed from “US Embassy” to “US Consulate,” and the diplomat residing in the location will no longer have to report to the US ambassador to Israel, but will report directly to the Palestine desk at the US State Department in Washington.

“We have an interesting yet delicate structure of our government and we think this might destabilize this government, and I don’t think the American administration wants this to happen,” Lapid said at a press conference Sept. 1.

However, the following day, US State Department spokesman Ed Price reaffirmed the intention of Washington to fulfill the pledge made by Secretary of State Antony Blinken to the Palestinians. On Sept. 3, Palestinians read on the front page of Al-Quds daily that the United States “is continuing with its plans to reopen the consulate in Jerusalem,” quoting Price’s answers to the paper’s Washington reporter, Said Erekat.

Palestinians are happy with the news of the near reopening of the consulate regardless of the Israeli position. This is very important because “we look at it as the future American embassy to the state of Palestine,” Prime Minister Mohammad Shtayyeh had said Aug. 31.

Fadi al-Hidmi, the Palestinian government's Jerusalem Affairs Minister, told Al-Monitor that the US move will be an “important step in reviving American diplomacy, which was absent during the Trump era.”

Hidmi said that by reopening the US Consulate in Jerusalem, Washington would be “reaffirming the international legal principle that East Jerusalem is occupied territory and will confirm the Palestinian position that any changes in Jerusalem of its historic sites, displacement of its people and its settlement policies are all null and void.”

Hazem Kawasmi, a Jerusalem-based political activist, told Al-Monitor that the US step to reopen the consulate is important toward fixing the US-Palestinian relations, at a time where the American role is much needed to advance the political situation and restart the negotiations between Palestinians and Israelis.

“The expectations this time are not as high as in the past rounds. Thus both Israelis and Palestinians have to think out of the box and innovatively in order to stop all kinds of violence, end the occupation and start building a long-lasting peace and reconciliation between them and the wider region,” Kawasmi said.

The US Consulate in Jerusalem had been operating continuously since 1835 until the Donald Trump administration broke this long record in 2019. If it opens this year, the closure would be no more than two years in the mission's 186-year history in the holy city.

The two-year break is seen by international experts as a violation of the concept of corpus separatum, the international term used in the United Nations Partition Plan of 194, which considered the holy city and its surroundings to be under a separate jurisdiction from either Israel or Palestine.

During his visit to Ramallah in May, Blinken had pledged to reopen the Jerusalem consulate, saying reopening the US Consulate General in Jerusalem would be “an important way for our country to engage with and provide support to the Palestinian people.”

Former President Trump signaled support for Israel's claim on Jerusalem as its capital by moving the US Embassy there from Tel Aviv. The US administration later subsumed the Jerusalem consulate to the embassy.

Dimitri Diliani, president of the National Christian Coalition in the Holy Land, told Al-Monitor that while Washington’s move is in the right direction, it will not fix the damage that the previous administration has caused in recognizing Jerusalem as the capital of Israel. “What is needed now is for the United States to recognize Jerusalem as the capital of Palestine so that the peace process can have an opportunity to move ahead,” he said.

Gershon Baskin, former co-director of the Israel-Palestine Center for Research and Information, told Al-Monitor, “The reopening of the US Consulate in Jerusalem — which always dealt with Palestinian affairs and which served throughout the Oslo years as a kind of de facto US Embassy to the future State of Palestine — is an expression of what should be the position of the international community. If there is going to be peace between Israel and the Palestinians in the future, this will require Jerusalem to be a shared city in some form — either as the capital of two states [East Jerusalem, the capital of Palestine; West Jerusalem the capital of Israel] or some form of shared sovereignty or agreed internationalization.”

Baskin argued that the Trump administration’s recognition of Jerusalem as the capital of Israel “did not remove Jerusalem from the negotiations table, and the reopening of the US Consulate in Jerusalem places the city back to the center of the table, where it needs to be.”

The simple act of changing a sign on a building will have a lot of meaning to Palestinians and to the trajectory of the conflict. In addition, it will make it clear what can and what can’t be done in relation to the Palestinian-Israeli conflict and the attachment of the Palestinian people to their holy city.