Commentary: Why the US is merging its Jerusalem consulate into embassy

The United States announced that its office dealing with Palestinian affairs in Israel will merge with the US Embassy in Jerusalem, raising concerns among Palestinians. 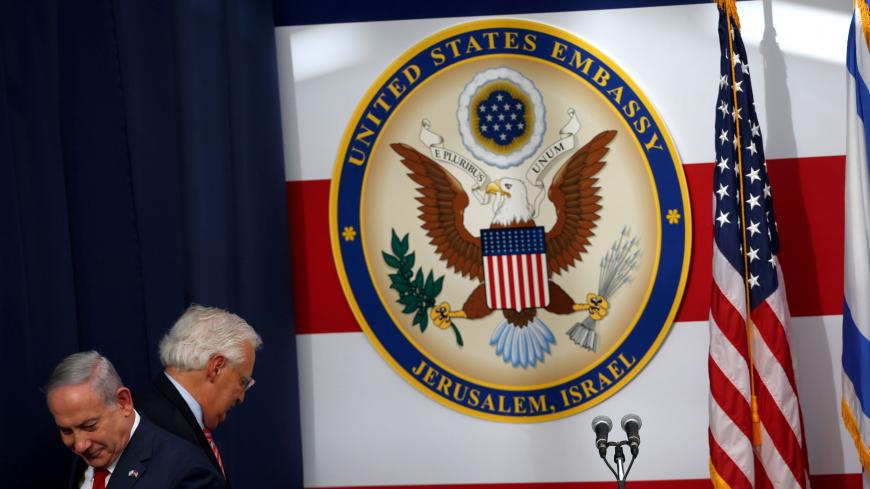 Israeli Prime Minister Benjamin Netanyahu walks past US Ambassador to Israel David Friedman during the dedication ceremony of the new US Embassy in Jerusalem, May 14, 2018. - REUTERS/Ronen Zvulun

The Donald Trump administration caught Palestinians off guard by deciding to merge its consulate in Jerusalem with the newly established Jerusalem embassy. US Secretary of State Mike Pompeo said in an Oct. 18 statement that the merger, to be led by US Ambassador David Friedman, would "achieve significant efficiencies and increase our effectiveness."

In addition to regular consular affairs, the consulate in Jerusalem serves as the US conduit with the Palestinian people and government and is a direct connection to the US State Department.

Palestinian officials quickly denounced the decision, saying the Trump administration was colluding with Israel to “impose Greater Israel with no Palestinian sovereignty,” as PLO Secretary-General Saeb Erekat described it.

The move shows that “the US cannot play any role in peacemaking. The Trump administration is part of the problem, not part of the solution,” Erekat added in an Oct. 18 statement.

Hanan Jarrar, head of the Americas desk at the Palestinian Foreign Ministry, told Al-Monitor that this grave decision requires a strong response. “The Ministry of Foreign Affairs is in touch with our allies throughout the world and we plan to follow up with them on the best path forward,” Jarrar said.

Hanna Issa, a Jerusalem-based lawyer specializing in international affairs, told Al-Monitor that the US decision violates numerous UN Security Council resolutions. “This is a clear violation of UNSC resolutions 242 and 338, as well as 478 of 1980, which called on all nations of the world not to recognize Israeli sovereignty over both East and West Jerusalem,” Issa said.

Issa added that the US decision, in all its political implications, signals “US opposition to a Palestinian state with East Jerusalem as its capital.”

The Palestinian position received a public boost by Daniel Kurtzer, a former US ambassador to Israel and Egypt, who attacked the decision in an Oct. 18 op-ed in the New York Daily News. The decision is “yet another step that accelerates the burial of an already moribund peace process,” Kurtzer wrote.

Kurtzer, now a professor at Princeton University's Woodrow Wilson School of Public and International Affairs, told Al-Monitor that the United States has had a continuous consular presence in Jerusalem since 1844. “We have always been tied to the idea that Jerusalem required a different kind of representation because of the sensitivity of the city and the fact that since the 19th century, diplomats in Jerusalem were responsible to protect religious, political and economic interests of their countries,” he said.

“It has nothing to do with efficiency and everything to do with permanently changing certain realities which would make it impossible for a future administration to change it back,” Miller said.

In the op-ed, Kurtzer questioned whether the creation a Palestinian Affairs Unit within the US Embassy would produce serious engagement. “Under this new arrangement, whereby a Palestinian Affairs Unit will presumably try to interact with Palestinians, is there any possibility of fair and honest reporting and commentary? I doubt it," he wrote. "David Friedman, the current US ambassador to Israel, has argued against referring to the ‘occupation’ of territories that Israel has administered since 1967, notwithstanding both longstanding US policy but also universally held positions.”

US State Department officials insist, however, that the decision to merge the consulate with the embassy has no political implications and is instead aimed at making the work of the US diplomatic effort more efficient.

A State Department official, speaking on condition of anonymity, told Al-Monitor that the aim of the move is not political; it is just intended to avoid duplicate work. “Whether it is something as simple as buying printing supplies, we believe that a single diplomatic mission will be easier to manage and will be able to make better deals that will save money,” the official said.

The source admitted that the change is a work in progress but was adamant that “consular processes involving all Palestinians will continue in the same building under the heading of Palestinian Affairs Unit.”

The source said that individuals born in Jerusalem, whether Jewish or Arab, are still listed in their US passports as being born in Jerusalem, not Israel. Israeli Americans born in Jerusalem have been asking for some time to have their birth country registered as Israel, but Washington has refused to change its policy of listing their place of birth as Jerusalem. In June 2015 and in a 6-3 ruling, the US Supreme Court struck down a law by Congress that would have forced the State Department to change its longstanding policy.

Karen Sasahara, who has been serving as US consul general in Jerusalem since August 2018, will not stay in Jerusalem once the change is complete. “While there is no set deadline for the consummation of this change, it will take place expeditiously,” the source said, noting that Sasahara will oversee the change in Jerusalem until the end of the current year, or possibly early into 2019, before moving to a new posting.

Erekat rejected the US attempt to cast the move as a bureaucratic measure aimed at efficiency. “The US decision to end the existence of the US Consulate … has nothing to do with ‘efficiency’ and a lot to do with pleasing an ideological US team that is willing to disband the foundations of [the] international system, and of US foreign policy, in order to reward Israeli violations and crimes,” Erekat said in his statement on the PLO's website.

Aaron David Miller, a senior member of the US peace team, told Al-Monitor that the Trump administration's intention is purely political. “It has nothing to do with efficiency and everything to do with permanently changing certain realities which would make it impossible for a future administration to change it back,” Miller said.

Philip Wilcox, consul general in Jerusalem from 1988-91, told Al-Monitor that the Trump administration has acted against the interest of Americans. "The decisions of this administration have been taken for personal reasons to please donors such as the casino magnate Sheldon Adelson. This decision goes directly against decades-long US history, directives and policy."

While Kurtzer concedes that the US decision will hurt peace efforts, he stopped short of saying that whatever is done can't be corrected. “It has now become extraordinarily difficult to turn this around, but I would not say it is irreversible,” he told Al-Monitor.

Miller, who served in both Democratic and Republican administrations and is now vice president for new initiatives at the Woodrow Wilson International Center for Scholars, listed the various anti-Palestinian decisions made by the current administration and concluded that the message to Palestinians coming from Washington these days is very simple: “You lost, get over it.”