US diplomats speak out against closure of Palestine mission

Several former US diplomats have expressed anger and disappointment over the administration’s decision to merge the mission that handled diplomatic contacts with Palestinians with its new embassy in Jerusalem. 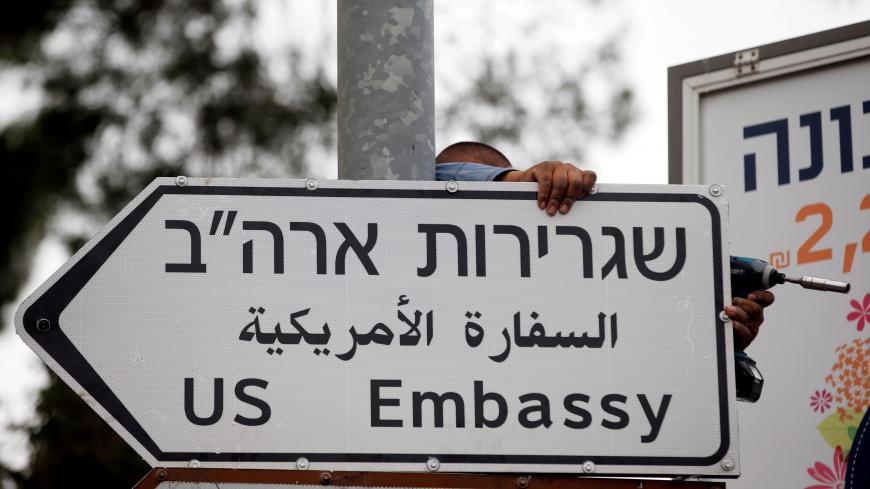 A worker hangs a road sign directing to the US Embassy in the area of the US Consulate in Jerusalem, May 7, 2018. - REUTERS/Ronen Zvulun

The decision of the Donald Trump administration to close the US Consulate in Jerusalem that served the Palestinian population and merge it with the US Embassy has prompted strong reactions from former US diplomats. The Americans, many of whom served in the mission, made strong public statements critical of the move. Some anticipated its reversal if a Democratic candidate wins the next US presidential elections.

Daniel Shapiro, US ambassador to Israel from 2011-2017, took to Twitter, writing a series of posts outlying why the Trump administration’s decision was wrong. “The closure of the US consulate in Jerusalem & its merger with the US embassy to Israel is a big mistake. It undercuts what should be our strategic objective (...) by depriving us of a diplomatic structure that points toward that goal.”

Shapiro, who also sat on the US National Security Council during the Barack Obama administration, revealed that Israel had not asked for such a thing before. “Israel didn't care for the mission, but literally never raised it (at least in my years in gov't) as something they wanted to see changed. They wanted us talking to the Palestinians,” he added.

Lara Friedman, director of the Foundation for Middle East Peace, was a diplomat at the consulate from 1992 to 1994. She told Al-Monitor that the move, coupled with the closure of the Palestinian mission in Washington, signified the United States' “formal de-recognition” of the Palestinians as a people.

“It relegates them — for the first time in history — to the status of an internal Israeli issue, to be reported and understood exclusively through the lens of the US-Israel relationship. In so doing, this move will make the situation on the ground worse, will make the possibility of peace more remote and will further isolate the US in its self-imposed bubble of bad policies shaped not by the facts or expert, apolitical analysis, or even by US interests, but instead by the agenda of a handful of messianic ideologues,” she added.

US Secretary of State Mike Pompeo first announced the merger in October 2018, some five months after Trump moved the embassy from Tel Aviv to Jerusalem.

Angered by Trump’s embassy move, Palestinian President Mahmoud Abbas rejected mediation by the US administration, saying Washington was no longer qualified to serve as the sole mediator in the decades-long conflict with Israel and that an international mechanism should be devised to replace the United States in the peace process.

US Ambassador to Israel David Friedman closed the consulate March 4, praising the “service and professionalism” of Consul General Karen Sasahara. No specific new position has been announced for her yet. “This decision was driven by our global efforts to increase the efficiency and effectiveness of our diplomatic engagements and operations,” read a US State Department statement.

But Israeli lawyer Daniel Seidmann rejects such a simplistic explanation of what he sees as a highly political move. “The consulate will not merge, but it will be subsumed into the embassy to Israel,” Seidmann told Arab News. “This is no mere technicality, it precisely reflects current US policies: All things Palestinian are subservient to Israeli interests.”

Nicholas Burns, former undersecretary of state and now a Harvard Kennedy School professor, called the closure a “mistake,” tweeting that all US presidents prior to Trump had “understood its importance as our bridge to the Palestinian people. I was proud to serve there in the 1980s.”

Dennis Ross, who served both Republican and Democratic administrations as chief peace envoy, was critical of the move, calling it “unfortunate” in press statements. Ross argued that Palestinians would see in the act “a sign of indifference to them.”

Ross believes that instead the US administration badly needed to take steps “to reach out to Palestinians if it is to have any hope for its plan.”

In a statement issued on behalf of the Palestine Liberation Organization, Executive Committee member Hanan Ashrawi said that the merging of the consulate with the embassy “is not an administrative decision. It is an act of political assault on Palestinian rights and identity, and a negation of the consulate’s historic status and function, dating back nearly 200 years.”

Speaking to the National Public Radio, former US diplomat Ed Abington, who served in the consulate from 1993 to 1997, noted that historically the position of Washington had been that the embassy in Tel Aviv and the consulate in Jerusalem “should not be merged.” He warned, “The effect on our ability to deal with the Palestinians is being greatly damaged.”

Gershon Baskin, founder of the Israel/Palestine Center for Research and Information, told Al-Monitor that the move is “another disastrous and foolish decision” by what he called the “irresponsible” Trump administration.

“Jerusalem is not a political toy which can be played with. Any formula for peace between Israel and Palestine must be based on a model of sharing Jerusalem. This step further distances the Palestinian public from seeing the US as a possible impartial mediator (which it has never been, anyway),” he added.

Hady Amr, a US diplomat who worked in the consulate from 2014 to 2017, expressed sorrow and pain in a tweet: “My heart is heavy. America should be playing the taps. A place I was honored to work out of during many trips in support of [the mission of Secretary of State] John Kerry.”

The Palestinian government slammed the United States for playing into the hands of the Israeli occupying power. “Replacing a mission that was established in 1844 with a department dealing with Palestinian affairs within the embassy is a rejection of Palestinian statehood and the legitimate Palestinian national rights,” the government said in its weekly statement.

While the critical statements from former US diplomats will do little to change the trajectory of the Trump administration’s moves to appease Israel, a much bigger problem is being ignored. Closing the US mission will do little to help Israel, but will also deny US decision-makers from the crucial local reporting that the mission provided to whatever administration was sitting in Washington. The closure of the consulate was a self-destructive act with little benefit to show for it.