President-elect Donald Trump's proposal to relocate the US Embassy would place another straw on the proverbial camel's back in the Mideast. 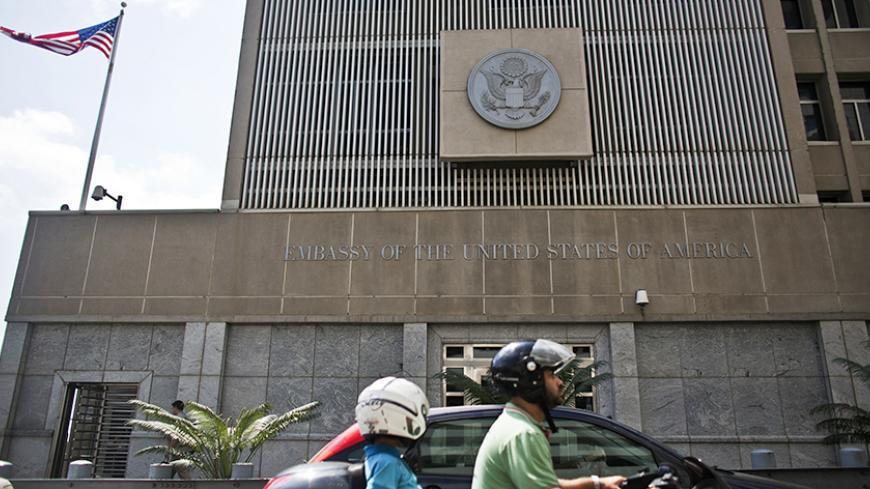 The possibility of US President-elect Donald Trump's administration actually carrying out his campaign "promise" to move the US Embassy in Tel Aviv to Jerusalem exposes a Pandora’s box of complications that would destroy what little chance exists of a mediated solution to the Israeli-Palestinian conflict.

The genuine worries raised by that specter have only grown following Trump's announcement that he will nominate pro-Israeli-settler, right-wing Jewish bankruptcy lawyer David Friedman as his ambassador to Israel. Friedman welcomed the news by saying he plans to work out of a new embassy office in Jerusalem.

The concern comes not only from Palestinian politicians; it comes from Palestinian, Israeli and US legal and academic experts. Camille Mansour, former professor of international relations at Paris University, told Al-Monitor that if it does take place, the US move will have a devastating effect in a number of areas.

“It is a clear abandonment of the corpus-separatum issue, which Jerusalem has enjoyed since before 1947," he said. A number of consulates were based in Jerusalem — US, Italian, English, Turkish, Spanish, French and Belgian — "based on this separate recognition of the city."

Corpus-separatum refers to a city or region with special legal and political status. The designation falls short of bestowing sovereign status, or that of an independent city-state.

Hanna Issa, a Palestinian expert on international law and a resident of Jerusalem, told Al-Monitor the United Nations has in various ways stressed the special status of Jerusalem. “This definition was made clear in the 1947 UN Partition Plan, Resolution 181, and a year later, the status of Jerusalem was reaffirmed in a separate resolution, UNGA 303, in December 1949,” he said.

In the 303 resolution, Jerusalem and its nearby towns of Bethlehem and Beit Sahour were declared part of a UN-supervised international city. Issa noted that the US would not only be going against its own positions, it would be in direct violation of numerous other UN resolutions. He cited 11 UN Security Council resolutions that all say East Jerusalem is an occupied territory "and reject the annexation of East Jerusalem to Israel.”

Gershon Baskin, an Israeli researcher and co-chair of the Israel-Palestine Center for Research and Information, told Al-Monitor he can’t understand why a US move is even being considered. “Until now, not one country has recognized any part of Israel. I think that the international community, the US included, has indicated that the issue of Jerusalem must be resolved by Israel and Palestine, and that unilateral action would not gain Israel recognition of Jerusalem as its capital.”

Baskin noted that if the US moves its embassy, it is definitely taking a position: “The US will be breaking international consensus on not recognizing Jerusalem as the capital of Israel until it is agreed in negotiations with the Palestinians."

Dan Kurtzer, a former US ambassador to Egypt and Israel and now a Princeton University professor, is similarly critical of the potential US move, especially the statement by Friedman, who expressed his intention to work “from the US embassy in Israel’s eternal capital, Jerusalem.”

Kurtzer expressed bewilderment in an interview published Dec. 16 in Forward, a New York-based, Jewish-American publication and website. “The president hasn’t been sworn in yet, the secretary of state hasn’t spoken about this, and [Friedman's] already talking about the policy he is going to change. This is unheard of,” said Kurtzer.

Ziad Khalil Abu Zayyad, a resident of the Jerusalem-area village of Azzariyeh and a spokesman for the Fatah movement, told Al-Monitor that the Jerusalem issue will hurt the US’ ability to make peace. “The US can’t make such a decision and at the same time try and make peace. This will definitely weaken America’s ability to have any mediation role in the conflict,” Abu Zayyad said.

He also said the issue will weaken Washington’s position within the Quartet of Russia, the European Union, the United Nations and the United States.

“It will certainly embolden Russia in the Quartet, and this will further erode the US influence in the Middle East,” he explained.

Al-Monitor has also learned from ‫an anonymous source within the US consulate in Jerusalem that the consulate is advising Washington and the Trump transitional team against an embassy move because of the potential instability it would cause.

The US Congress in 1995 passed legislation that calls for the embassy to move to Jerusalem, but allows the president to delay such a move if he feels it would harm US interests. All three US presidents (Bill Clinton, George W. Bush and Barack Obama) since that time have signed waivers every six months during their terms to delay a move.

Any controversial decision regarding the highly sensitive issue of Jerusalem will have negative effects locally, regionally and internationally. When former Jerusalem Mufti Ekrima Sabri delivered his sermon Dec. 16 in Jerusalem’s Al-Aqsa Mosque, he said that meddling with Jerusalem is like playing with fire. This is not only true on the popular level; reversing decades of US and international law and practice regarding Jerusalem would have legal and diplomatic fallout.

Trump's smartest strategy will be to avoid beginning his term with a colossal mistake.