As Biden takes lead, Palestinians eager to return to talks with US

While Palestinian officials don't expect a Biden administration to roll back all of Trump's policies, they are hopeful for a change in course in US-Palestinian ties. 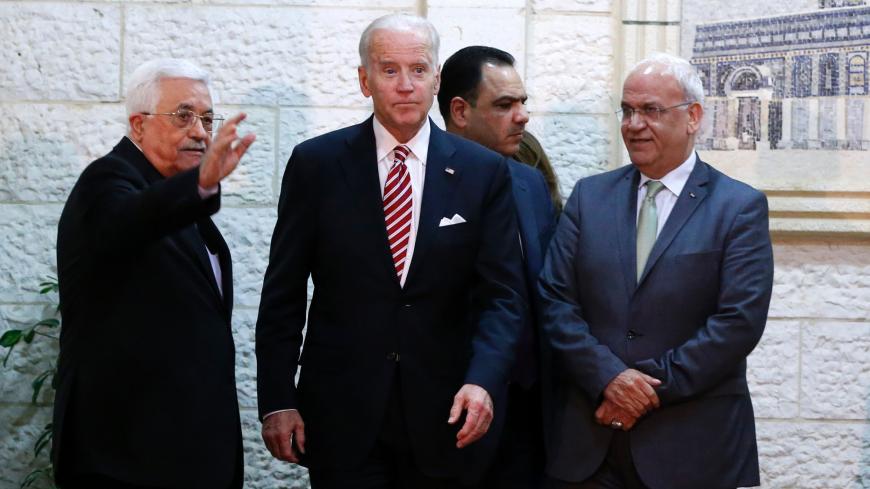 US Vice President Joseph Biden (C) stands next to Palestinian president Mahmoud Abbas (L) and Palestinian chief negotiator Saeb Erekat (R) as they arrive for a meeting in the West Bank city of Ramallah on March 9, 2016. - ABBAS MOMANI/AFP via Getty Images

As former Vice President Joe Biden appears set for a victory against President Donald Trump in the US elections, the Palestinian presidential headquarters in Ramallah is in a quandary. Palestinian officials want to make a full-throated congratulatory statement to Biden, but they fear some sort of retribution from Trump during his lame-duck period before the official inauguration. In the end, the Palestinian presidency agreed to make a general public statement once the votes are in and Biden’s victory is official; the rest will be done in behind-the-scenes talks.

Palestinian officials are yearning to renew talks with Washington. President Mahmoud Abbas only decided to break with the Trump administration once he realized that all the preliminary talks with Trump and his team were only a cover to allow for a totally biased plan that began with the move of the US Embassy from Tel Aviv to Jerusalem, the defunding of Jerusalem hospitals and the UN Relief and Works Agency for Palestinian refugees, and eventually the announcement of a proposed map for a Palestinian-Israel deal that showed Israel taking over 30% of the West Bank’s fertile Jordan Valley in return for spots in the Negev desert.

The statement made by Biden’s running mate, Sen. Kamala Harris, on the eve of the election was well received in the Muqata — the presidential headquarters in Ramallah — Al-Monitor has learned. The vice presidential nominee said, “Joe and I also believe in the worth and value of every Palestinian and every Israeli and we will work to ensure that Palestinians and Israelis enjoy equal measures of freedom, security, prosperity and democracy.”

Harris added, “We are committed to a two-state solution, and we will oppose any unilateral steps that undermine that goal. We will also oppose annexation and settlement expansion.”

Harris also pledged to reverse Trump’s decision to defund organizations delivering critical relief and aid to the Palestinians. “And we will take immediate steps to restore economic and humanitarian assistance to the Palestinian people, address the ongoing humanitarian crisis in Gaza, reopen the US consulate in East Jerusalem and work to reopen the PLO mission in Washington.”

However, Biden is unlikely to backpedal on all the Trump administration's decisions. Biden has said he will not reverse the decision to move the US Embassy, although it is highly unlikely that Biden will move forward with the process of building a huge embassy as Trump adviser and son-in-law Jared Kushner and US Ambassador to Israel David Friedman were planning.

Palestinians would love to pick up where things were left off in 2014 during the Barack Obama administration, including the return to the Obama parameters as well as building on the anti-settlement UN Security Council Resolution 2334, which the Obama administration abstained on during the last days of its presidency in December 2016. In 2014 testimony to the US Congress, US Secretary of State John Kerry had cast the lion's share of the blame on Israel for blowing up the talks with Palestinians.

While the Palestinian position is generally focused on US foreign policy in relation to the overall Palestinian-Israeli conflict, one of the biggest issues of concern to Palestinians involves the relations between the occupied and the occupier. Most relevant in this issue has been the marked increase of late in house demolitions both in Jerusalem and the Jordan Valley area. On the financial level, there is also a focus on Israel’s violation of the Paris Economic Accords, whereby Israel decided to deduct money from tax and customs revenues that it collects on behalf of Palestinians over and above the 3% administrative fees that are included in the signed agreement.

Israeli press reports have said that Palestinian officials are willing to agree to receiving the truncated funds and even return to Palestinian-Israeli security coordination if all the back taxes are returned. Palestinian officials contacted by Al-Monitor, however, refused to comment at all on this issue, saying they are focusing on the return to normal engagement with Washington on the basis of agreed-to international modalities and will not allow a side issue such as the tax revenues to affect the expected discussions with a Biden administration.

Palestinians also will unlikely be able to reverse the decisions of two Gulf countries to normalize relations with Israel in contradiction to their own commitments in the Arab Peace Initiative. The latter was adopted by all 22 states of the Arab League in Beirut in 2002, to offer a formula for ending the Palestinian-Israeli conflict. Privately, Palestinian sources realize that it is difficult to reverse such normalization decisions but that it might be possible to limit their effect. For example, some Palestinian activists argue that countries such as the United Arab Emirates and Bahrain should not agree to violate international law by engaging with Israeli companies that are working with illegal Jewish settlers in contradiction to Security Council Resolution 2334. Bank Hapoalim, which was listed on the UN list of companies working in settlements, signed on Sept. 15 a memorandum of understanding with  Emirates National Bank.

The Palestinian presidency is hopeful that the expected change of course in the American executive branch will allow for a return to normal Palestinian-US relations and therefore can produce a positive response to the call made by Abbas at the UN General Assembly for an international conference to be held early in 2021.