The US-Palestinian Economic Dialogue covered infrastructure development, access to US markets, US regulations, free trade and other financial issues. 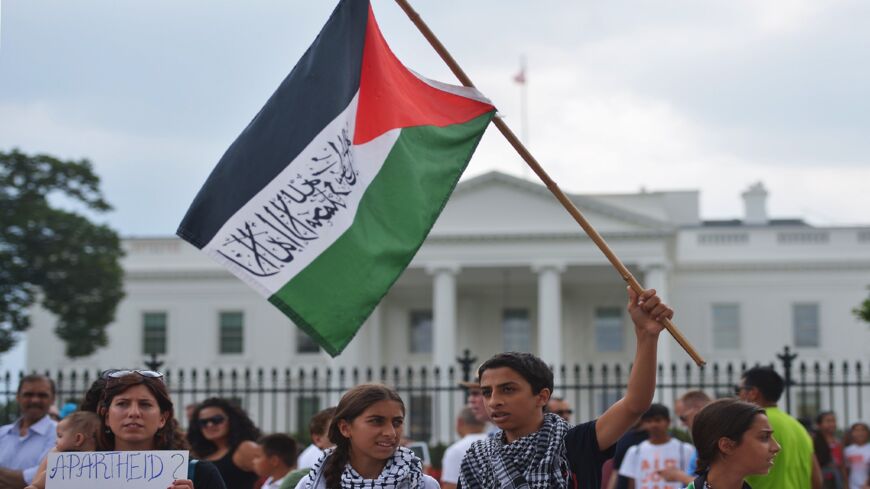 Youths wave a Palestinian flag outside of the White House during a demonstration on Gaza, on Aug. 9, 2014, in Washington, DC. - MANDEL NGAN/AFP via Getty Images

For the first time in five years, US and Palestinian officials met virtually this week to hold an economic dialogue as the Biden administration works to restore relations with Ramallah.

Participants in the senior-level US-Palestinian Economic Dialogue on Tuesday “pledged to expand and deepen cooperation and coordination,” the State Department said in a statement.

The US delegation included Acting Assistant Secretary for Near Eastern Affairs Yael Lempert, who in a statement understored the Biden administration’s support for the Palestinian people.

“Growing the Palestinian economy will also play a critical role in advancing our overarching political goal: a negotiated two-state solution, with a viable Palestinian state living side by side in peace and security with Israel,” she said.

The dialogue last convened in May 2016 before the election of President Donald Trump, whose policies were seen as biased toward Israel and prompted the Palestinian Authority to cut ties with the United States.

President Joe Biden’s approach to the Palestinian-Israeli conflict is more in line with those of previous presidents. However, the Biden administration said it will not reverse Trump’s recognition of Jerusalem as Israel’s capital, nor will it relocate the US Embassy back to Tel Aviv.

In May, Secretary of State Antony Blinken confirmed the United States would reopen the Jerusalem consulate, which had served as a de facto embassy for the Palestinians before Trump closed the consulate in 2019.

The Biden administration has also restored US humanitarian aid to the Palestinian territories and the UN agency for Palestinian refugees known as UNRWA.