Palestinian officials welcomed recent moves by the Joe Biden administration in which he reversed some of the previous administration’s policies that were seen as strongly biased toward Israel. 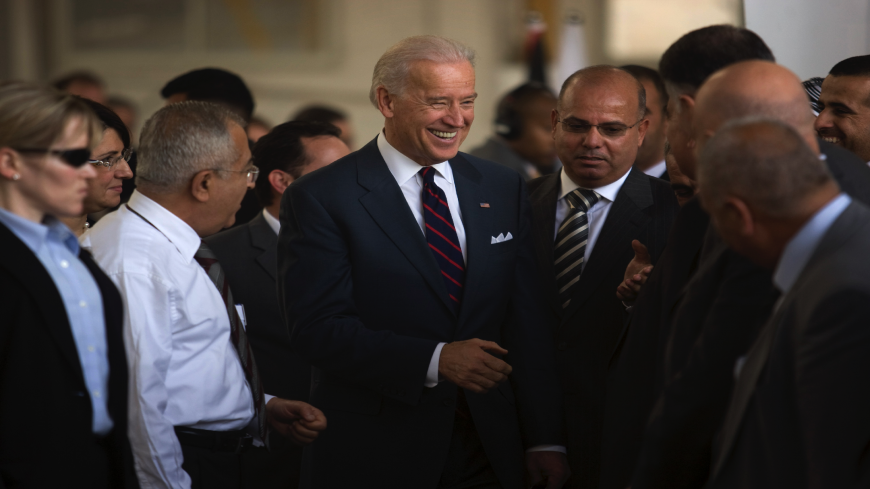 US Vice President Joe Biden (C) alongside Palestinian Prime Minister Salam Fayyad (2nd L) speaks with local businessmen at the Nassar Stone factory in the West Bank city of Bethlehem on March 10, 2010. Biden met Palestinian leaders, telling them Israel's decision to expand settlement activity in east Jerusalem is undermining the peace efforts he is promoting. He also stressed the US administration's commitment to the creation of a viable Palestinian state. - DAVID FURST/AFP via Getty Images

Palestinian officials breathed a sigh of relief with the swearing-in of Joe Biden. Palestinian government spokesman Ibrahim Melhem said President Mahmoud Abbas and Prime Minister Mohammad Shtayyeh welcomed the announcements made by top officials of the Biden administration declaring the reversal of some of Donald Trump’s anti-Palestinian decisions. He said the new administration’s moves emphasized the US support for a two-state solution and the need to resume Israeli-Palestinian negotiations.

Despite Biden’s optimistic words, it is unclear yet whether there will be any substantive changes in US foreign policy toward Palestine/Israel.

Khalil Assali, a Jerusalem-based political analyst, said the resumption of efforts at the Jerusalem consulate on Agron Street will revive US-Palestinian communication. “The move of the US Embassy from Tel Aviv to Jerusalem and the existence of one of the worst US ambassadors to Palestinian-American relations has caused a total cessation of talks. So, for sure the reopening of a mission in Jerusalem that is dedicated to Palestinians will revive both secret and public meetings on the political level as well as on the economic and development levels,” said Assali.

Despite the public statement welcoming the US moves, Palestinians say it is unclear whether the Biden administration will reverse all decisions or whether there will be added conditions on the issue of the return of the Palestinian office in Washington and the US mission in East Jerusalem. Palestinian officials are worried about having to return to the earlier version in which the Washington office’s status will be reviewed every six months as part of anti-terrorism congressional legislation. Also, it is unclear how the East Jerusalem US mission will work while the Biden administration has stated it will not reverse Trump’s decision to move the US Embassy to Jerusalem.

Sam Bahour, a Palestinian-American business consultant living in the West Bank, told Al-Monitor all the excitement about the return of USAID to Palestine and the opening of the PLO diplomatic mission in DC is premature. “The reasons why the Palestinian leadership stopped taking US funds was due to Congress passing specific laws with potentially huge liabilities on the PLO, and this has not been resolved. Why would the Palestinian leadership now feel like it can accept potential liabilities they rejected only a short time ago? As for the PLO office in DC, this would be a lost opportunity for the PLO to accept this instead of only agreeing to open an embassy of Palestine to the US. As we are all too used to, the US is not being held accountable for its blaring missteps.”

Nevertheless, Khalil Assali, publisher of the Jerusalem-centric news site Akhbar el-Balad, told Al-Monitor the potential return of USAID funding to the Palestinian areas, including Jerusalem, will reactivate civil society organizations. Of special concern to many are the financial problems facing leading Palestinian specialized hospitals in East Jerusalem. These hospitals, which have been providing important and advanced medical support to Palestinians, especially cancer children from Gaza, are hoping to be able to dig themselves out of economic hardship. Employees of the Makassed Hospital in East Jerusalem went on a work stoppage on Jan. 26 because of consistent delays and partial salaries due to the extreme financial crisis that has developed over the years, in part due to the abrupt cut in US aid during the Trump administration that had been pledged by Washington.

UNRWA is also hoping the return of US funding will help it overcome a $200 million deficit it is facing. UNRWA spokesman Sami Mshasha notes that UNRWA had been receiving $360 million in US government aid when Trump stopped all support in 2017.

Samir Hulileh, a Palestinian economist living in Ramallah, told Al-Monitor the US decision to revive its financial support will effectively end a financial siege placed on the Palestinian government and its institutions by the US administration. “Palestinians have suffered in the last years as a result of this siege, the pandemic and the Israeli financial restrictions, which have resulted in a 12% retraction of income in the past year. This means the $300 million in various US government support will make a difference whether it is given to the Palestinian government, to security use, to the private sector, humanitarian support or support to UNRWA,” Hulileh said.

Hulileh noted the US decision is likely to release support from other funders and governments, which took the US decision as a signal to suspend support to Palestinians.

However, Hulileh wondered whether this will cause a revisit to how money is spent so as to have a sustainable and underpouring economy, or whether we will go back to the old financial mechanisms and living on aid.

The welcome that Palestinians have given to the early statement by the Biden administration reflects a major need for a return to the status quo that existed before Trump used a sledgehammer of political and economic policies with the aim of forcing Palestinians to surrender to US-Israeli dictates. But having the relief of US pressure is a far cry from having a serious effort by Washington to move the peace toward a political breakthrough, which will require time and knowing the results of the upcoming Israeli and Palestinian elections.