Palestinians have low expectations for Biden trip to region

Although US President Joe Biden will meet with Palestinian Authority President Mahmoud Abbas in Ramallah, Palestinians expect little to come from the meeting. 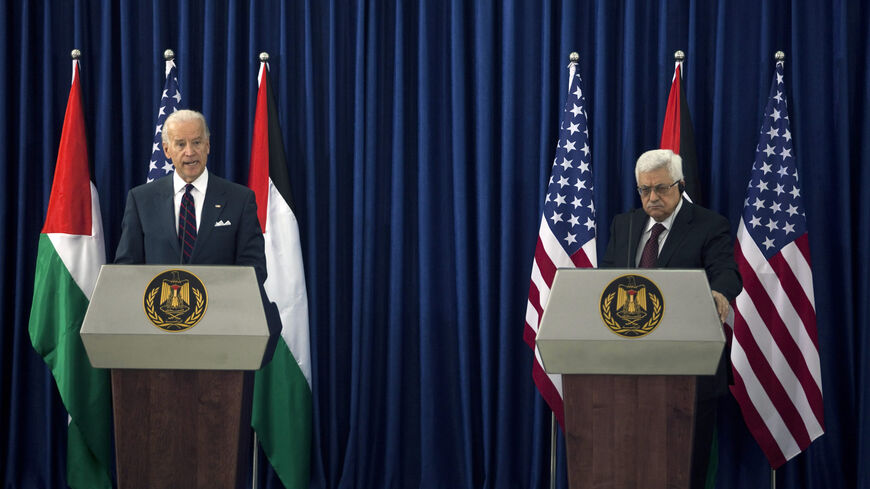 GAZA CITY, Gaza Strip — US President Joe Biden is scheduled to visit Israel and the West Bank as part of a trip to the region on July 13-16, for the first time since he took office in January 2021. Palestinians, however, do not seem very optimistic about the visit’s outcome.

On the Palestinian side, the US president is set to meet with President Mahmoud Abbas in Bethlehem.

At the end of his visit to Israel and the West Bank July 15, Biden is expected to board his plane from Ben Gurion Airport on a rare direct flight to Saudi Arabia to attend a summit of the Gulf Cooperation Council plus Egypt, Iraq and Jordan (GCC+3) in Jeddah.

On April 7, 2021, the Biden administration announced the resumption of aid to the Palestinians, amounting to $235 million, after former US President Donald Trump suspended all financial aid in an attempt to force the Palestinian Authority (PA) to negotiate with Israel on the basis of the so-called Middle East peace plan, also known as the deal of the century, which the PA squarely rejected.

The PA appears to attach great importance to Biden’s visit to the region, especially after the ruptured US-Palestinian relations under Trump.

On July 8, for the first time in five years, the PA leader held a rare phone call with the Israeli premier, in preparation for Biden’s visit.

Azzam al-Ahmad, member of the PLO Executive Committee, told Al-Monitor, “There are concerns that Biden will not prioritize [any solution] to ending the Palestinian-Israeli conflict during his visit to the region.”

He noted that the main Palestinian demands from the US administration are to revive the negotiations with Israel that have been stalled since April 2014 on the principle of establishing a Palestinian state on the 1967 borders, reopening the US Consulate in East Jerusalem, removing the PLO’s name from US terror lists and reopening its office in Washington.

On several occasions over the previous months, the Biden administration expressed its commitment to reopening its consulate in East Jerusalem, and also announced its intention to reopen the PLO office in Washington — two things that have not happened until today.

This prompted the PLO to criticize in a June 24 meeting the Biden administration for “not putting in place any serious mechanism to fulfill its promises to the Palestinian people.”

Ahmad pointed out that Abbas is likely to ask Biden to organize an international conference that will push to revive the peace process between the Palestinians and Israel, leading to the establishment of a Palestinian state on the borders occupied in 1967, with East Jerusalem as its capital.

It seems that the American and Israeli interest in this visit are focused more on other issues, the most important of which is Arab normalization with Israel and the formation of an Arab-Israeli alliance to confront Iran.

Hamas leader Yahya Moussa said the US president "will not offer anything to the Palestinian cause." Speaking to Al-Monitor, he added, "We do not believe that the diplomatic option will end the occupation, we believe that resistance is the only way to achieve this."

He claimed that Biden's visit is targeted at realizing the "regional NATO" project, which entails forming a military alliance that includes Israel and Arab countries, at the expense of the Palestinian cause. Moussa stressed that "the escalation of comprehensive resistance [including the West Bank and inside Israel] is the way to confront this alliance."

In his opinion piece in The Washington Post June 8, Biden wrote, “I will also be the first president to fly from Israel to Jiddah [Jeddah], Saudi Arabia. That travel will also be a small symbol of the budding relations and steps toward normalization between Israel and the Arab world, which my administration is working to deepen and expand.”

Meanwhile, during the weekly Israeli Cabinet meeting July 10, Lapid said that strengthening cooperation between Israel and the United States against Iran will be at the heart of Biden’s visit to the Middle East.

Palestinians usually keep a close eye on American policy news, in the hope that one day they will hear about progress toward a two-state solution to the ongoing conflict with Israel.

Many Palestinians, however, were disheartened with the news of Biden’s visit to the region, with few expectations that this visit would find a solution to the ongoing conflict with Israel or put an end to their hardships.

Jamil al-Zahar, who works as a salesman in a vegetable store in Gaza City, told Al-Monitor that he does not expect anything to change in the lives of Palestinians with Biden’s arrival to the region.

He added, “The only salvation for the Palestinians lies in ending the occupation and establishing a Palestinian state. Without that, solutions will not end the conflict.”

Halima Farwaneh, public school teacher in the city of Rafah in the southern Gaza Strip, told Al-Monitor, “The main objective of this visit is to ensure Israel’s security from the threat that Iran poses. I do not think Biden will pay attention to Palestinian interests.”

Muhammad al-Sheikh, who works as a driver in the southern West Bank city of Bethlehem, told Al-Monitor, “Forming an Israeli-Arab alliance against Iran and expanding Arab normalization with Israel are the objectives of this visit. As for the Palestinian issue, it is one of America’s last concerns under Biden.”

Meanwhile, Farid al-Jabarin and his family, who reside in Masafer Yatta, south of Hebron, face the threat of eviction from their house as the Israeli Supreme Court approved the displacement and expulsion of more than 1,000 Palestinian families from eight Palestinian villages in the Masafer Yatta area, to be transformed into military training and shooting areas for the Israeli army.

Jabarin told Al-Monitor, “While no one in the world — including the US president — can stop the Israeli crime against us, Biden is coming to enhance Israel’s security without paying any attention to the Palestinians.”