Palestinian President Mahmoud Abbas called for the dissolution of the Palestinian Legislative Council, a move that raised legal controversy. 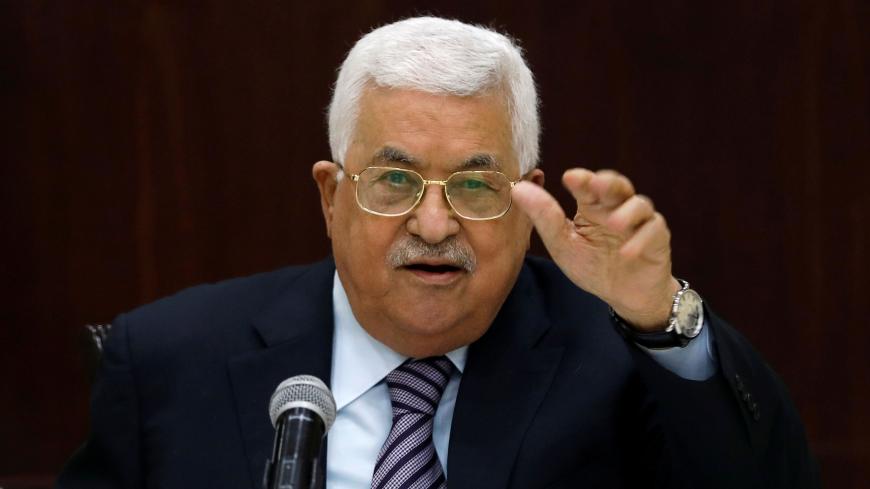 GAZA CITY, Gaza Strip — Palestinian President Mahmoud Abbas is moving toward dissolving the Palestinian Legislative Council (PLC) in a legally questionable step. The amended Palestinian Basic Law of 2003 does not grant the president or any official Palestinian committee the power to dissolve the PLC.

Abbas’ move would remove any remaining authority and power Hamas has in the PLC, where it won the majority of seats in the last parliamentary elections in 2006. Such a move would further deepen the Palestinian division between the Gaza Strip and the West Bank.

Fatah’s Revolutionary Council led by Abbas issued a statement Oct. 14 after the council had been convening over three consecutive days in Ramallah. In the statement, the Revolutionary Council called on the PLO's Palestinian Central Council (PCC), which is also led by Abbas, to dissolve the PLC and prepare for general elections in the Palestinian territories within a year.

The PLC acts as a parliament that is elected during general elections. It is considered one of the institutions of the Palestinian Authority (PA).

The PCC is one of the PLO’s institutions that was behind the decision to create the PA in 1993. The PCC is in charge of monitoring the PLO’s Executive Committee that is responsible for implementing the decision of the Palestinian National Council (PNC). The PNC is considered the parliament of the PLO. The PCC also follows up on the work of PLO institutions and submits its resolutions to the Executive Committee for implementation. The PCC members are chosen during elections among the PNC members.

The Basic Law and its 2003 amendments does not grant the PCC or any other party or person the right to dissolve the PLC. Article 113 of the law states, “The Palestinian Legislative Council may not be dissolved or its work hindered during a state of emergency, nor shall the provisions of this title be suspended.”

The Revolutionary Council’s statement, published by the official news agency Wafa, added, “The PCC founded the Palestinian National Authority on Oct. 16, 1991. The PLO worked responsibly when dealing with the PA’s work and institutions, monitored the elections in 1996 and 2006, and accepted the results with a positive attitude.”

It continued, “Yet what Hamas did on July 14, 2007, as they took over Gaza contradicts with our patriotic morals and the ethics of our work. By doing so, Hamas paralyzed the work of the PLC that lost its capacity to exercise its legislative and monitoring roles. In fact, the PLC was no longer active.”

Hamas won in the last Palestinian general elections held on Jan. 26, 2006. The party won 76 out of 132 seats in the PLC while Fatah only won 43 seats. Since the military takeover of Hamas on Gaza in 2007, the PLC was paralyzed as the PA stopped the PLC from convening in the West Bank. Meanwhile, several parliamentary blocs boycotted the PLC sessions that have continued to be held in Gaza.

He clarified that the PCC will add the recommendation of Fatah’s Revolutionary Council to its agenda for its scheduled meeting at the end of October. Ramadan believes that the PCC will decide on dissolving the PLC because “Fatah — the largest organization of the PLO parties — has the majority of votes in the PCC.”

Abu Ramadan said that a great number of members of the PCC “support the dissolution of the PLC. This would annul any remaining legitimacy for Hamas in Gaza. The members believe that this would help them confront US President Donald Trump’s 'deal of the century,' which aims to separate the Gaza Strip from the West Bank.”

First deputy speaker of the PLC Ahmad Bahar said in a press statement Oct. 14 that the decisions made by Abbas on the PLC “have no constitutional or legal worth. The council rules itself and Abbas is an usurper of authority [the PA].”

Noteworthy is that Abbas’ term ended in 2009 and there has been no presidential elections since then.

Yahya Moussa, a PLC member from Hamas’ Change and Reform bloc, told Al-Monitor, “We refuse the PCC’s and Abbas’ decision to dissolve the PLC because both parties are not competent to do so.”

He considered that Abbas’ attempts to dissolve the PLC are “very dangerous because it undermines the main Palestinian system, destroys democracy in the country and accentuates the state of internal divisions.”

Moussa added, “We are ready for the new general elections right this second with a Palestinian consensus and international guarantees to respect the results. However, any decision to dissolve the PLC preceding the general elections will stand in the way of us having a unified electoral experience.”

He said, “Abbas — whose movement Fatah lost in the last Palestinian general elections — wants to dissolve the PLC to isolate Hamas from the political scene and diminish its popularity before any elections. And this, we will not allow.”

Salah Abdul Ati, an expert in Palestinian law and Gaza director of the Palestinian Center for Policy Research and Strategic Studies - Masarat, told Al-Monitor, “There is no Palestinian law that allows the PCC or any body to dissolve the PLC. This council [PLC] was chosen in popular general elections and could only be dissolved in the same way.” According to Abdul Ati, new elections should be held to establish a new PLC and dissolve the current one.

The PLC’s term is considered to have ended in 2010 since its four-year term ended after the last Palestinian general elections in 2006. No new elections were held because of the rift between the authorities in the Gaza Strip and the West Bank in 2007.

Abdul Ati referred to Article 47 bis of the Basic Law and its 2005 amendments that stated, “The term of the current Legislative Council shall terminate when the members of the new elected Council take the constitutional oath.”

He noted that there is one exception allowing the dissolution of the PLC that is “an agreement between the parliamentary blocs within this council to dissolve it.” This exception, however, is not stipulated in the law, and is a consensual matter among the various Palestinian parties.

Political analyst and journalist at the Palestinian Al-Ayyam newspaper Talal Awkal told Al-Monitor, “The decision Abbas has made to dissolve the PLC is part of the political bickering between Hamas and Fatah. It is also related to arrangements for the post-Abbas period, in case of death.”

He explained, “According to the Palestinian Basic law, the speaker of the PLC [Hamas leader Aziz Duwaik] takes over for 60 days while waiting for the new elections [in case the presidency becomes vacant]. This is why Abbas and his movement are trying to make this option unavailable for Hamas through dissolving the PLC.”

Awkal explained that the decision to dissolve the PLC through the PCC will eventually lead to chaos and power struggle.

As for Abu Ramadan, he finds that “the best solution to this legal controversy on dissolving the PLC is for the PCC to call for general elections without dissolving the PLC. Otherwise, greater Palestinian divisions are guaranteed.”