Hamas delegates find welcome at Fatah conference, but not trust

Despite the recent civility between Fatah and Hamas, it will take more than a Hamas delegation at Fatah's general conference to repair their nine years of division, as mutual distrust remains strong. 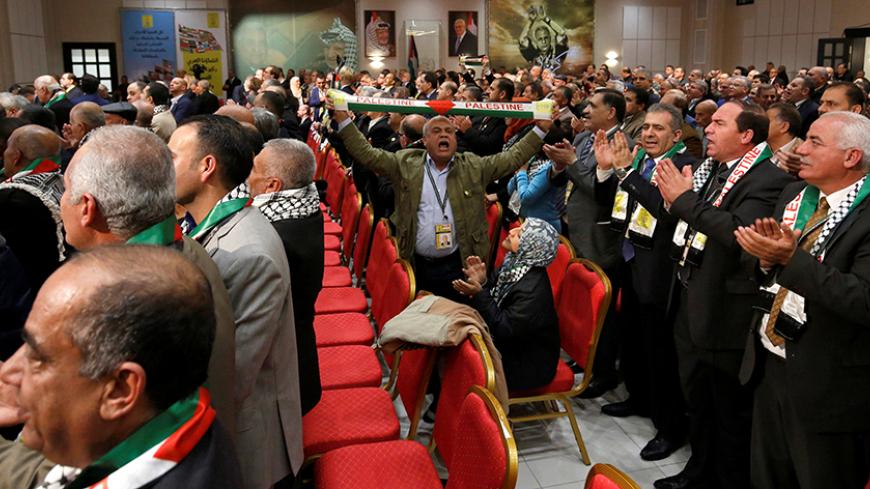 RAMALLAH, West Bank — Recent developments have some observers asking if PLO parties Hamas and Fatah are possibly nearing reconciliation, but others point to the numerous failed attempts at rapprochement since the groups split violently in 2007.

A Hamas delegation participated in the opening of Fatah’s seventh general congress Nov. 29 in Ramallah, possibly marking a turning point in the groups' relations.

Ahmed Haj Ali, Hamas' representative to the Palestinian Legislative Council (PLC), expressed the importance of his group's participation in the event. Speaking on behalf of Khaled Meshaal, the head of Hamas’ political bureau, Haj Ali said, “We are partners in our homeland and the decision-making process. We are ready [to assume] all the requirements of our partnership with Fatah and all other factions.”

Abbas said, “Our national unity is the backbone of our cause. We call on Hamas to end the division through democracy, by holding the Palestinian National Council elections as well as presidential and legislative elections.”

Speaking about the implications of Hamas' attendance at the congress, Haj Ali told Al-Monitor, “Hamas’ participation was not part of protocol. It was rather to express its position over reconciliation and its willingness to be partners with Fatah and all other factions when it comes to decision-making and fighting for the Palestinian cause.”

He added, “Hamas' participation stems from its belief that no party can exclusively make Palestinian decisions, because unity is a must.”

Abbas and Meshaal had met Oct. 27 in Qatar, which is sponsoring reconciliation talks between the two movements.

Sultan Abu al-Einein, a member of Fatah’s Central Committee, told Al-Monitor, “We hope that Hamas’ words will be interpreted into actions, and we hope the national interest will win over partisan interest.” He added, “President Abbas sent a positive message to Hamas at the conference when he stressed the need for unity by forming a government of national unity or conducting presidential and legislative elections.”

He noted, “We are worried about Hamas, because we have heard the words [of its leaders before] and we want to see action. Hamas must bear the historical responsibility of ending the division.”

“Hamas stressed the importance that all factions participate in the decision-making process, in addition to the need for Fatah to unify its ranks and return to its initial program, which is the armed resistance and the development of the PLO.”

Despite all the well-wishing, however, it didn't take long for the war of words to heat up once again.

Moussa said, “Abbas’ message is worthless. It is a play on words.” He added, “President Abbas has to make a real move toward Hamas and make concessions as the latter has done in order to end the division.”

Author and political analyst Ibrahim Abrash told Al-Monitor that Hamas and Fatah always present a positive front before meetings, but things go downhill from there. He allowed, however, that this time might be different.

“Meshaal’s words and Abbas’ positive response and the way he praised Qatar’s and Turkey’s roles in achieving reconciliation could indicate that the president wants to try to work out reconciliation from a new perspective,” Abrash said.

Hamas' participation at Fatah’s seventh congress stirred up some positivity. However, during Fatah’s sixth congress, held Aug. 4, 2009, when now-dismissed Fatah leader Mohammed Dahlan participated, Hamas was attacked and accused of attempting to stage a coup. Dahlan, an Abbas rival, did not participate in this year's conference. Some believe Hamas' participation resulted from its agreement with Fatah to keep Dahlan away.

Sufian Abu Zaida, a close Dahlan associate, wrote in his Dec. 1 article “Love Letters Between Hamas and President Abbas” that “Hamas has made up its mind and picked a side" in Fatah's internal conflict. He was referring to Hamas choosing Abbas over Dahlan.

He added, “Hamas seems to be convinced that President Abbas needed to get rid of his nemesis Dahlan, or at least weaken him. Seeing as how [Dahlan’s] main center of power is Gaza, Abbas is ready to make concessions and to take all the steps he was reluctant to take during the past 10 years.”

Some Dahlan supporters wanted to hold a separate conference, as Dahlan was excluded from the seventh congress. Naima Sheikh, a dismissed Fatah leader close to Dahlan, told Al-Monitor, “Hamas did not allow us to organize any event in Gaza to express our rejection of Fatah’s congress, and this may have been the result of an understanding between Abbas and Hamas. … We submitted several requests to Hamas in Gaza, but they were all denied.”

Though Hamas apparently chose Abbas over Dahlan during the conference, Abrash said Hamas has sent positive messages to both Abbas and Dahlan, who has close ties with Egypt. Abrash believes Hamas will choose the side that offers the most to it and Gaza.

He explained that Hamas was searching for common ground with Abbas, which may help resolve some outstanding issues, but one cannot yet be optimistic about ending the division or reaching reconciliation.