On its 51st anniversary, is Fatah facing identity crisis?

The leading Palestinian movement is facing an internal challenge in terms of its identity and how to bring about national liberation. 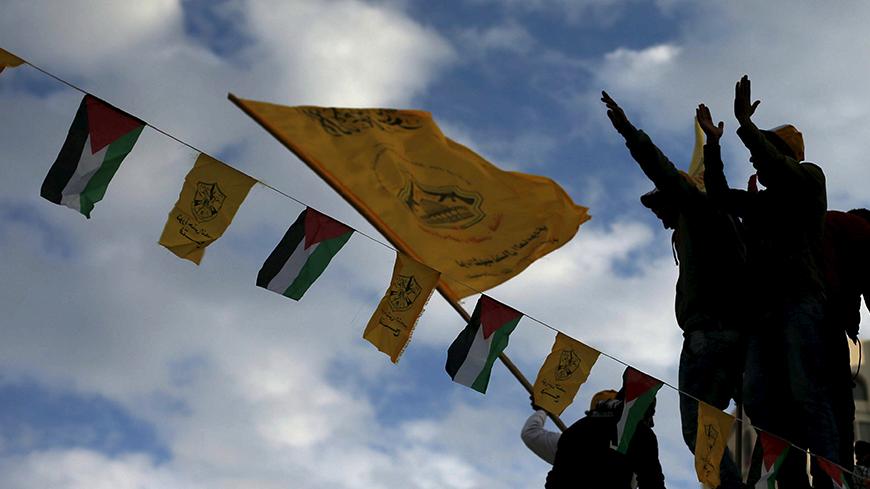 Palestinian Fatah supporters celebrate during a rally as they mark the 51st anniversary of the founding of the Fatah movement, Gaza City, Dec. 31, 2015. - REUTERS/Suhaib Salem

As the leading Palestinian national movement celebrates its 51st anniversary, two major challenges loom large in determining whether it survives or disintegrates.

Fatah, formerly the Palestinian National Liberation Movement, was established in 1959 but declared itself publicly on Jan. 1, 1965. The first press release under the Fatah name announced a guerrilla operation by its military wing, al-Asefa, initiated from south Lebanon against the Israeli water system.

The movement has been credited by historians with shaping present day Palestinian nationalism by leading the Palestinian struggle for liberation and independence. It has further played a role in changing the Palestinian mindset from victimized refugees at the mercy of the international public eye to a proud nation insisting on their liberation.

But this identity — which became the movement’s raison d’etre — was epitomized by Yasser Arafat, who was replaced by Mahmoud Abbas. The difference between the two is often reflected in the image that they have chosen to portray. Arafat was proud of his army fatigue and nationalist keffiyeh and keeping irregular work hours, while Abbas attempts to portray a leading civilian by regularly wearing a business suit and encouraging a professional work ethic.

Fatah’s success was also due to the fact that it was a wide-ranging movement and not simply a political party with narrow goals. Mohammad Masharqa, a senior adviser at the Palestinian mission in London, recalled in an interview with Al-Monitor that as a movement, Fatah was able to draw Marxists and religious Islamists.

“It welcomed right-wing and left-wing activists, nationalist secularists and Islamists. They fought for liberating Palestine and establishing a democratic state for all its citizens irrespective of their religions and beliefs,” Masharqa said.

The Oslo Accord launched in 1993 changed that, and the movement has been swallowed by the newly established governmental structure, as per Masharqa. “Fatah has a challenge to decide whether it is a national movement that supports the government, or [whether it is] the ruling party of the government. Each definition has its requirements and will therefore yield different results.”

Fatah insiders are not as worried about this issue, but rather feel that Fatah’s problems stem from the fact that it has failed, on both political and national levels, to bring about change in ending the occupation or in setting a clear tangible strategy in this direction.

Ahmad Ghneim, member of the Fatah Consultative Committee, an advisory council that includes former members of the Revolutionary Council and Fatah’s Central Committee, told Al-Monitor that to succeed, Fatah needs to address these setbacks.

“We are aware that there is little political horizon these days with Israel, and the US, in the next year, is clearly not on board,” he said. However, Ghneim feels that there is a lot that can be accomplished despite the national setbacks.

Ghneim noted that a number of young Fatah leaders are attempting to deal with the national crisis by trying to seek national reconciliation, especially with Hamas. “Regionally, there has been polarization between nationalists and Islamists. But we should not allow ourselves to fall in this trap. We should not have to pay the price of internal Arab differences,” he added.

The same sentiment about the effects of regional issues on local ones was reflected by a Fatah activist in Gaza, Zakaria Talmas. “The intervention of Arab governments and the dirty use of political money have to be dealt with,” he told Al-Monitor.

Privately, Fatah officials indicate that the pressures from Arab countries are focused on refusing attempts at reconciliation with Hamas. Press reports have indicated the depth of the Arab intervention in reconciliation issues.

Al-Monitor learned from a trustworthy source in the movement who requested anonymity that a number of second-generation Fatah leaders began a campaign to break up the reconciliation logjam with Hamas. The campaign included visits to Qatar and a meeting with Hamas leader Khaled Meshaal to find out exactly why words of reconciliation are not translated into actions.

The Fatah gestures toward Hamas appear to have produced some positive feedback. While the Hamas leadership in Gaza continues to ban large public celebrations of Fatah’s anniversary, one of the moderate Hamas leaders has taken the extraordinary step of publicly congratulating Fatah on its anniversary.

On his Facebook page, Ahmad Yousef, a former adviser to Hamas’ Ismail Haniyeh, wished Fatah success in its efforts for reconciliation. “Political disagreements might have kept us apart, but we should work together hand in hand for a better national and social future.”

Many saw in this statement a positive hint toward an end to the split and the opening of a new page between the two movements with the beginning of the new year.