Bibi blames everyone but himself for recent violence

The Israeli government blames incitement for a series of stabbing attacks by individual Palestinians instead of acknowledging the real reasons they are willing to take such a risk. 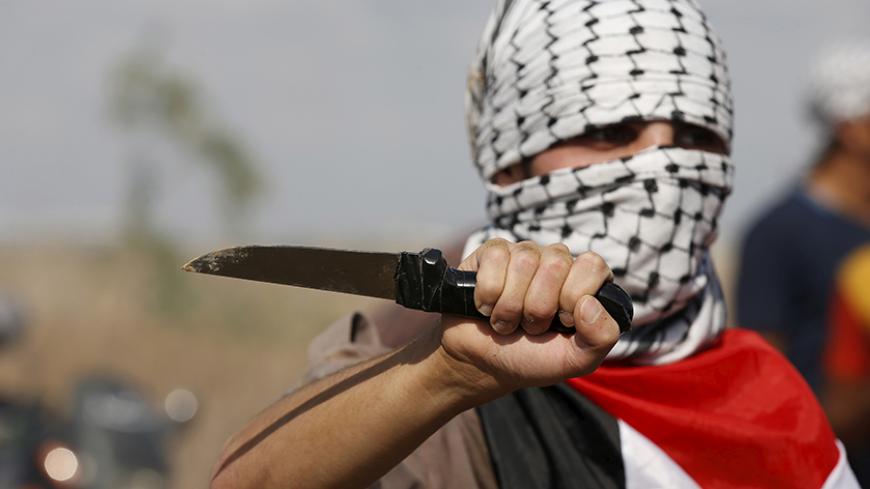 A masked Palestinian protester holds a knife during a protest near the Israeli border fence in northeast Gaza, Oct. 9, 2015. - REUTERS/Mohammed Salem

At the start of the weekly Israeli Cabinet meeting Oct. 11, Prime Minister Benjamin Netanyahu announced that he had instructed Attorney General Yehuda Weinstein to launch a criminal investigation of Joint List Knesset member Haneen Zoabi, whom he accused of incitement to target Israeli citizens. Netanyahu even recited what Zoabi had said to the Hamas-affiliated newspaper Alresalah: “Hundreds of thousands of worshipers should go up to Al-Aqsa in order to face down an Israeli plot for the blood of East Jerusalem residents. Today there are actions only by individuals, and what is needed is popular support. If only individual attacks continue without popular support, they will sputter out within a few days. Therefore the outpouring of thousands of our people will make these events a real intifada.”

At the same meeting, a senior Shin Bet official contradicted the allegations leveled by Netanyahu and his ministers who at the onset of the recent wave of terrorism blamed Palestinian President Mahmoud Abbas for it and accused him of incitement as well. In his security overview to the ministers, the official asserted that the Palestinian president was in fact trying to calm the atmosphere and that he had instructed his security forces to curb the wave of violence.

On Oct. 8, Netanyahu had called a special press conference, listing one by one those he believed to be responsible for the wave of terrorism washing over Israel. He laid blame on Hamas, the Palestinian Authority, several countries in the region and the Islamic Movement in Israel, accusing them all of incitement. On his official Facebook page, Netanyahu promised Israelis that he was doing everything to restore security. “We will use every available tool against all inciters,” he wrote, blaming everyone for the situation except for himself.

Even if all the actors that Netanyahu lists at every turn are indeed responsible for incitement, and even if it is done for political or diplomatic purpose, the million-dollar question remains: Are young Palestinians from the territories as well as young Palestinians in Israel only mounting attacks because of incitement?

One could also ask whether the visits by Jews to the Temple Mount, or Haram al-Sharif to Muslims, are causing young people without security records to carry out stabbing attacks even though they stand little chance of surviving themselves. How did we get to the point where the Palestinian president, according to Shin Bet and Military Intelligence, is taking action to avert the outbreak of a third intifada, but his security forces are unable to stop unorganized youths who follow in each other’s footsteps in the hope of becoming a “shahid” (martyr)?

This time, no one can say that these young assailants, men and women, were brainwashed at Hamas mosques to mount attacks by Allah’s orders or a fatwa (religious decree) issued by an imam. There is no certainty that what is provoking the individual stabbing attacks is either incitement, which Netanyahu sees as the primary cause, or the tensions surrounding the Al-Aqsa Mosque and compound.

Instead, the incidents at Al-Aqsa and the incitement — yes, the incitement — are only adding fuel to the fire ignited and kept on a low flame since talks between the Israelis and Palestinians derailed in April 2014. Back then, it should be recalled, both Netanyahu and Abbas were forced by US Secretary of State John Kerry to assemble negotiation teams in a bid to reach a diplomatic agreement based on a two-state solution. Rather than freeze construction in the settlements, which was Abbas’ condition for starting the talks, Netanyahu chose instead to release 127 prisoners, some of them Arab Israelis, with “blood on their hands.” The releases were to take place in a four-phase process, but Netanyahu couldn’t withstand the pressure from the right.

A series of rallies organized by the My Israel movement, whose members protested the fourth phase, led Netanyahu and his government to call off the release of the last 27 prisoners. The talks ran aground and in effect were discontinued.

The hopelessness, despair, lack of diplomatic progress and dire economic situation of the Palestinians has brought about the current situation. These are the reasons that drive young people who have never been involved in terrorist activity in the past or affiliated with a terrorist organization to go on a killing spree with a knife, knowing they are unlikely to survive.

In the past, the Israeli defense establishment had profiled the potential suicide bomber in a bid to find a response to the attacks that washed over Israel during the second intifada, from 2000 to 2005. Even if it profiled today's Palestinian stabber, a new type of terrorist, it is highly questionable that it would identify his or her primary motive as the wave of incitement Netanyahu has been suggesting.

Indeed, the Islamic Movement, headed by Sheik Raed Salah, has left no stone unturned in Arab Israeli towns in rallying those who believe Al-Aqsa Mosque is in danger. What brought about the current wave of terrorism in Israel, however, are neither the buses to demonstrations organized by the movement or the mobilization of the Mourabitoun to “defend” the Haram-al-Sharif from the “dirty feet” of the Jews.

Even Zoabi, who has more enemies than supporters among Palestinians in Israel, is not the one who ignited the fire, nor was it the Hamas movement, which has been straddling the fence because its leaders know full well that a violent intifada could stop the supply of raw materials and food that Israelis deliver daily through the border crossings, thereby allowing the movement to remain in power. Even Abbas, the easy prey at which Netanyahu and his ministers typically point the finger, cannot be held accountable for the situation.

So who is to blame? It’s the one who brought Palestinians to the brink of despair and frustration.

As soon as the peace talks between Israel and the Palestinians derailed, the Israeli defense establishment began preparing for a third intifada, but none of its assessments or scenarios predicted a wave of terrorism by so-called lone wolves. Everyone warned of Hamas or Islamic Jihad. The biggest concern was that Fatah’s militant Tanzim would join the cycle of violence. No one predicted an intifada by young individuals without security records who influence each other with the desire to become shahids.