Palestinian university students express their despair over a life of humiliation at checkpoints and a lack of credible leadership at home, warning that many of their colleagues are already preparing for an uprising. 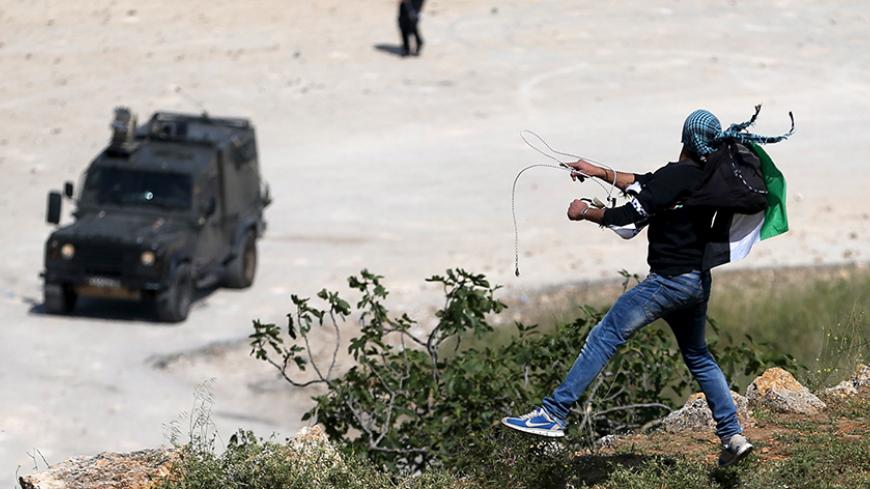 A Palestinian protester throws a stone toward Israeli troops during clashes following a rally marking Nakba Day near Israel's Ofer Prison, close to the West Bank city of Ramallah, May 15, 2015. - REUTERS/Mohamad Torokman

Jerusalem is at the heart of the Palestinian national struggle for its historical and religious significance in Islam. East Jerusalem is also the only territory occupied in 1967 that was annexed by Israel (except for the Golan Heights). The Palestinians often claim that Israel is attempting to turn the Temple Mount (or Haram al-Sharif) Jewish; it’s a misplaced fear but widely believed. Therefore one can expect that, should an uprising (intifada) break out in the West Bank, it would have Jerusalem as a central theme, especially Al-Aqsa Mosque, which may also become the central battleground.

A group of students from Al-Quds University spoke to Al-Monitor at the house of a popular Fatah member about their attitude toward the current situation, the eventuality of an intifada and the place of Jerusalem in their hearts and minds. Ishan, Aya, Mona, Daud, Ahmed, Thaer, Monir and Mohammed agreed to speak to Al-Monitor on a first-name basis only, afraid of reactions from their entourage in view of their moderate opinions.

There was a fairly wide consensus among the group, which is relatively pragmatic and Fatah-oriented, on those issues.

These three young women and five young men — all from Palestinian Jerusalem suburbs — emphasized their psychological suffering over the Israeli occupation. They seemed more tired of it than angry, but refused to acquiesce. The daily humiliation by Israel Defense Forces (IDF) soldiers on roads and at checkpoints was described over and over again. For these young people, the humiliation governs their thoughts and shapes their view of all political issues.

In parallel, most of them expressed strong criticism of the Palestinian Authority. They accuse its leadership of a gross lack of effectiveness and prevalent corruption. They want a younger and more militant leadership, but apart from Marwan Barghouti, they do not see anyone suitable on the horizon.

As a result, despite defining themselves as Fatah supporters, they surprisingly expressed some admiration for Hamas (“at least they fight”). These youths are secular, however, and will not join Hamas ranks.

Altogether, what seems to drive them essentially is a pragmatic attitude to the challenges of life. Their studies and work opportunities are what interest them most. In the midst of all the regional and local turbulence, they seek normality. There is certainly no love lost for Israel, but they are ready for a “live and let live” approach after the end of the occupation, based on the return to the 1967 lines, with East Jerusalem as their capital. If politics and diplomacy fail, they insisted an intifada was definitely a possibility.

When the issue of Jerusalem came up, emotions flared. “Al-Quds is at the heart of Palestine; it is sacred to us and Israel robbed us of one of the holiest sites of Islam. If needed, we will take it back by force,” cried out a young lady, who, based on her attire, is obviously secular and modern. They explained that, though they are secular, Jerusalem symbolizes to all of them their national aspirations.

All eight complained bitterly that to pray at Al-Aqsa Mosque, or visit family and friends in East Jerusalem, they had to beg the army for permits and be humiliated by the Israeli border police at checkpoints.

Politically, all of them claimed that East Jerusalem must be their capital and that Al-Aqsa Mosque and Haram al-Sharif must be under Palestinian sovereignty. Mona added that conceding West Jerusalem to Israel was a difficult concession, but one they were ready to make. It was clear from the conversation that, besides ending the occupation, Jerusalem is the one issue that stirs these youths most.

They claimed that the Fatah leadership was not encouraging them toward violence or intifada, but that many of the young students in their university and in other Palestinian universities were preparing for an uprising, even an armed one. They said that despair over the political situation, the daily sufferings under the occupation and disappointment with the Palestinian leadership would sooner or later leave them with no other choice. According to the most dominant figure in the room — a young Fatah leader at Al-Quds University — we will face at a certain point another “Al-Aqsa intifada.”

Indeed, a Jerusalem-centered intifada should be considered likely because even young moderates tend to opt for it. It would certainly have severe consequences. Violence involving Palestinian youths, Fatah troops and Palestinian police inside Jerusalem would ignite fierce fighting with the IDF in one of the most sensitive spots of the world. It would galvanize the entire Arab and Muslim world to the Palestinian plight — something the Palestinian youths are desperately searching for. It would challenge Hamas, and even Hezbollah, to join the battle, at the risk of turning such a battle into a religious war.

This doomsday scenario is preventable only by a viable political process that can demonstrate tangible results within a reasonable time frame. This process must address the two core issues that concern both Israelis and Palestinians: borders and security, and Palestinian freedom and Israeli security along the visionary lines of Presidents Bill Clinton and Barack Obama. Such a political resolution must include a fair sharing of Jerusalem as the two capitals within the framework of a two-state solution. As evident by the remarks of the eight Palestinian youths, any escapism from this issue will result in conflict.

But given the composition of the new Israeli government, the eventuality of a peace process seems slim to none. The fourth Benjamin Netanyahu government is the most extreme right-wing government Israel has ever had. The ministers holding key positions (such as Minister of Education Naftali Bennett and Minister of Justice Ayelet Shaked) are in favor of annexation of the greater part of the West Bank. They support racist anti-Arab legislation and want to see Israel more Jewish in nature and less democratic, with a weaker High Court of Justice.

Only a new Israeli unity government based on full parity between the Likud and the Zionist Camp can tackle the existing challenge and predicament.