The elements that helped trigger the first and second intifadas are present today, raising the possibility of a third Palestinian uprising. 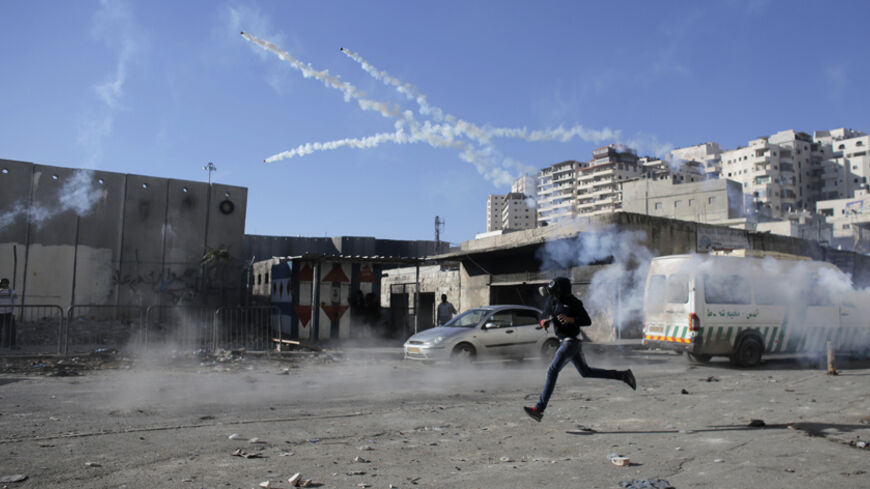 A Palestinian stone-thrower runs under tear gas during clashes with Israeli border police at a checkpoint between Shuafat refugee camp and Jerusalem, Nov. 6, 2014. - REUTERS/Ammar Awad

One of the most often repeated themes littering political discussions and commentary by pundits in Israel and Palestine involves when the next intifada will take place. The repeated failure to predict it shows that no one can foresee what combination of issues and actions might produce the collective popular protests that have become associated with Palestinian uprisings against the Israeli occupation.

Despite not being able to identify or predict when the next intifada will erupt, it is a helpful lesson to look at the elements present when the first and second uprisings began and compare them to the current situation. Identifiable elements triggering past intifadas include the absence of a political horizon, violent Israeli repression, an increase in settlement activity and tensions in Jerusalem.

In the 1980s, following Israel’s invasion of Lebanon that forced the Palestine Liberation Organization (PLO) to relocate to Tunis from Beirut, Israel under Likud leadership began a systematic settlement drive that included major land confiscations in the West Bank. Unable to stop this illegal and exclusively Jewish settlement activity, Palestinians eventually revolted.

The absence of a political horizon after 20 years of occupation was a major contributor to the first intifada, which began Dec. 9, 1987. The second intifada broke out on Sept. 28, 2000, after repeated Israeli foot dragging in post-Oslo peace talks. When the Palestinians lost hope with the possibility of a peace agreement at Camp David II, they responded violently.

During both uprisings, Israel reacted to initial Palestinian protests with a heavy hand. Yitzhak Rabin, defense minister at the time of the first intifada, notoriously urged his soldiers to “break the arms” of Palestinian stone throwers. A CBS film crew shot footage of Israeli soldiers doing exactly that. In the second intifada, Israel responded to protests with live ammunition, killing five Palestinians in Jerusalem in one day, Sep. 29. According to Amnesty International, within 20 days, more than 200 Palestinians would be killed.

Jerusalem was the focal point for Palestinians in both intifadas. The underground leadership of the first intifada was in large part orchestrated out of the Orient House in Jerusalem. Years later, the decision by Ariel Sharon to visit the Haram al-Sharif, site of Al-Aqsa Mosque — in an attempt to demonstrate Israeli sovereignty over Islam’s third holiest site — would provoke violence, triggering the second intifada.

Despite certain similarities, one can also discern differences between the two uprisings. The first intifada largely involved nonviolent resistance. The most violent aspect from the Palestinian side involved stone throwing. The use of nonviolent methods resulted in the first intifada being a more popular uprising, involving large numbers of Palestinians.

The second intifada, which occurred after the PLO leadership established the the lightly armed Palestinian Authority in the occupied territories, was largely an armed uprising with regular exchanges of fire, suicide bombings and other violence. It also included another new element — Palestinian citizens of Israel. When the Israelis reacted violently in repressing the initial protests in Jerusalem, Palestinians in the Galilee revolted angrily in defense of Al-Aqsa. Thirteen Palestinian citizens of Israel died as a result of the violent response by the police.

A look at the situation in Palestine today indeed reveals a number of similarities with the past. A sense of hopelessness has prevailed since the collapse of the US-led peace talks in April. Israel’s ongoing settlement activities continue to be the major source of Palestinians' anger, as they see their aspirations of an independent state evaporate in front of their own eyes. Violent Israeli repression and the sense of impunity felt by soldiers and settlers have also provoked violence. Once again Jerusalem and Al-Aqsa are the focus of Palestinian anger as they see Jewish extremists walking around the Haram al-Sharif calling for Al-Aqsa's destruction and construction of the third temple in its place. Palestinians in Israel have already joined the protests and again are being confronted harshly by Israeli security.

While it is impossible to pinpoint which actions might trigger an all-out, lasting Palestinian rebellion, it is reasonable to assert that all the ingredients are present for a third Palestinian uprising.