A different kind of intifada

The sustainability and longevity of the current protests in Palestine seem dependent upon the continuation of violence and whether or not people manage to stay hopeful. 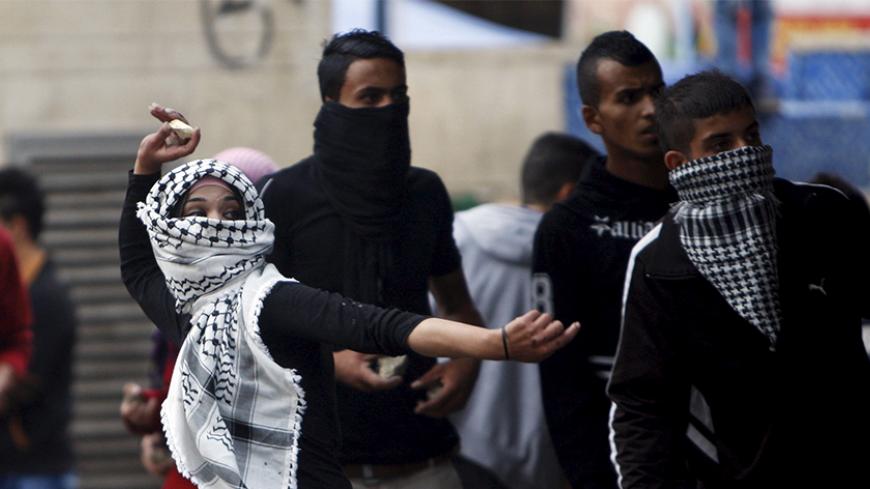 A Palestinian girl hurls stones at Israeli troops during clashes after a suspected Palestinian militant stabbed and wounded an Israeli soldier and was then shot dead by special forces, Hebron, Oct. 7, 2015.

The ultimate direction of the current violent escalation in Jerusalem and the rest of the West Bank is a mystery. Is it the long-anticipated third intifada? Or is it merely a short-term spike in the escalation of violence?

One thing seems clear: There is no way of knowing or predicting the depth, length or nature of what happens when people lose hope. Palestinian President Mahmoud Abbas’ decision to wash his hands of the 1993 Oslo Accord — which he himself had signed 22 years earlier — might be the straw that breaks the camel’s back.

Without any peace process in sight and with the young Palestinian population seeing no future, it is not surprising that people are revolting. The question that is hard to answer is related to sustainability: How long will the people protest before they reach exhaustion? Ironically, this question was asked at the beginning of the last two large uprisings — the first and second intifadas.

During the first intifada the unified leadership was completely underground, even though it was loosely affiliated with the various Palestine Liberation Organization (PLO) factions. During the second intifada, also referred to as Al-Aqsa Intifada, the role of the lightly armed Palestinian police and the suicide attacks, as well as the role of the Palestinian citizens of Israel, provided backing to the protest activities.

Analysts and commentators as well as political leaders seem to be in almost universal agreement that the current violent side of the protests will not last. They argue that without organized support for the uprising, the most likely result will be a slow fizzling out of the resistance protests.

The PLO factions — with the exception of Fatah — are largely irrelevant today. Public opinion polls show that supporters of various PLO factions rarely get more than a couple of percentage points of support. Islamic Jihad and Hamas, as well as remnants of the Fatah and other PLO militants, are under close scrutiny by both the Israelis and Palestinian security. This means that the protesters must be independent of formal organizations.

Ziad Khalil Abu Zayyad, a spokesman for Fatah from the West Bank town of al-Izzariya just outside the Israeli-built wall around East Jerusalem, told Al-Monitor that politicians will do their best to contain this wave of resistance and will not allow it to get out of their control. He said, “While some politicians are trying to hijack the current resistance activities and claim responsibility, the major forces created by the Oslo Accord will not allow it to become effective.”

Talal Abu Afifeh, head of the Jerusalem Intellectual Forum, expressed a similar point of view to Al-Monitor. He said, “What we are seeing today is totally unorganized and I don’t expect it to last long. The Palestinian leadership doesn’t want it to continue for fear that it will spiral out of control, which will force the Israeli army to reoccupy many West Bank cities and thus destroy the Palestinian authority’s infrastructure.” Abu Afifeh, who is an active member of the Fatah movement, told Al-Monitor that the planned seventh congress that would certainly usher in a post-Abbas leadership at the end of November is unlikely to take place. “It will be postponed until sometime in 2016," he said.

A popular Facebook post by Hadi Abdalhadi Alijla explains why sustained protest activity cannot come from major, known Palestinian groups. He wrote Oct. 2, “Fatah leaders who have parachuted into positions of power will not allow a new intifada because they like the status quo.” Alijla, who was educated in the Gaza Strip and runs the Institute for Middle East Studies in Canada, also pointed out that many middle-class civil servants and civil society members will not favor a full intifada. “They have bank loans and a nice lifestyle to defend. They will not allow their way of life to be disturbed by a series of attacks that can cause the security coordination to collapse,” he wrote in a post that has gone viral among young Palestinians.

Despite the abundance of Palestinian skeptics, the reality on the ground presents a much different picture. With each Palestinian killed or injured, the longevity of the protests is ensured. Another source of continuity of protests is the absence of hope. Without a credible peace process, it is impossible to pacify disillusioned, young and impressionable Palestinians who are the majority of the population. The Palestinian Bureau of Statistics reported that about four in 10 Palestinian young people were unemployed in the second quarter of 2014, and therefore so many have so little to lose by continuing the protests until they are convinced that a real peace process is underway.