Israel should address the root cause of Palestinian anger — occupation — if it truly wants to prevent a third intifada. 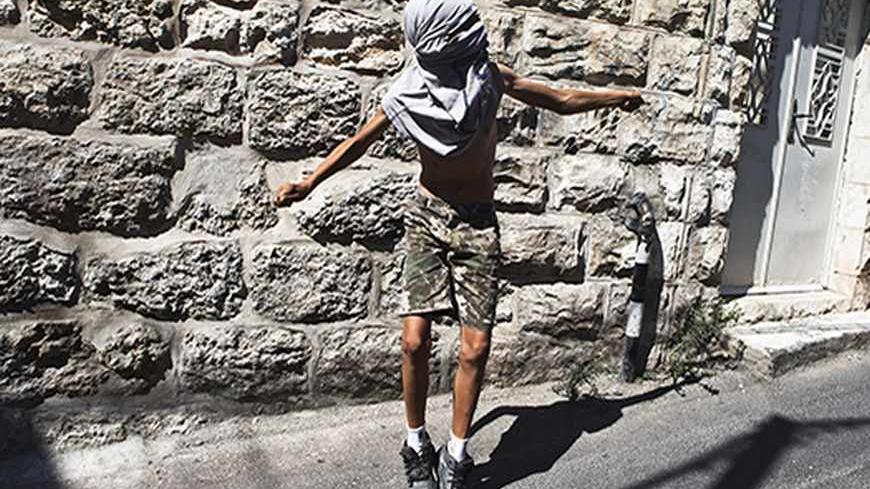 A Palestinian boy uses a sling to throw a stone during clashes with Israeli police following Friday prayers in the East Jerusalem neighborhood of Ras al-Amoud, Sept. 27, 2013. - REUTERS/Nir Elias

Intifada Youth Coalition (IYC-PAL) invites the media to report on our protests across Palestine on Friday, Sept. 27, designated "Al-Aqsa Friday," against Israel's gross violations of human rights and continued brutal occupation of Palestine. –Third Intifada of Anger against the Occupation in all #Palestine

This call for public demonstrations, which ended with a link to a Facebook account, is certainly not new in Palestine. Nor is the fact that it originates from the youth, the largest demographic among the Palestinian population, or its dependence on new media rather than traditional media.

What is new is that the call comes at a time when Palestinian negotiators are participating in talks that aim to find a permanent solution for all outstanding issues between Israelis and Palestinians. In fact, Mahmoud Abbas alluded to this in his first ever address to the United Nations as the president of Palestine, saying that the Palestinian objective is to achieve a permanent and comprehensive agreement and a peace treaty between the states of Palestine and Israel. Abbas insisted that such an agreement will “resolve all outstanding issues and answer all questions, which allows us to officially declare an end of conflict and claims.”

Abbas spoke of his age (78), implying that this is the last chance to make peace with him and others in his generation.

Abbas’ speech showed a totally different line of thinking from that of the Palestinian street. The majority of the Palestinian population is young. According to the Palestinian Central Bureau of Statistics, 40% are under 14 years of age, while the age demographic of Abbas — 65 and over — comprises only 2% of the total 4.3 million Palestinians in the territories. Unlike his previous speeches, this talk at the UN attracted little attention on social media, where today’s young activists can be found. The youth of Palestine are angry and have little faith in Abbas or the current talks, rendering the fear of a new explosion very real.

It is clear on so many fronts why the situation is now ripe for an eruption of anger, but it remains unclear specifically how, when and where the next round will be. When the first Palestinian intifada broke out, Israeli settlers were an easy target with their provocative presence in Palestinian streets and thus became the target of stone-throwing Palestinians. During the second intifada, the settlers were less visible. Therefore, the protests took on a more lethal format: shootings and bombings throughout Israel and the occupied areas. If an outbreak takes place now, it is dangerously unclear how it will manifest.

Two competing forces are prevalent among Palestinians these days, one of which is a nonviolent stream that sees popular nonlethal actions as the only way forward. This form of protest requires much more time and patience, and this might be its weakest point. The concept of popular resistance has received the blessing and lip service — though not support — from the Palestine Liberation Organization (PLO) leadership and Hamas leader Khaled Meshaal. The best known manifestation of this stream is the weekly anti-wall demonstrations in various Palestinian towns such as Bilin, Nabi Saleh and others. A more creative and courageous form of this action was unleashed in January by youth who created unauthorized villages like Bab al-Shams on the outskirts of Jerusalem. The Israelis quickly crushed this effort.

The more violent form that an intifada could take is more troubling and worrisome to Israelis, who use every opportunity to insist that as part of the peace process, Palestinian security forces are responsible for somehow securing Israel and its settlers. This call to crush any anti-Israeli resistance activity simply adds political pressure to a weak Palestinian government. Instead of addressing the occupiers and the underlying causes of a possible new outbreak of violence, some Israelis, as Al-Monitor’s Shlomi Eldar writes, believe that only the Palestinian government can stop a possible third intifada.

Abbas has repeatedly and publicly opposed any militarization of the resistance to the occupation, instead supporting nonviolent protests. Moderate Palestinians feel that it is unfair to expect Abbas to further ruin the tarnished reputation of his own security forces as a collaborator and agent of Israel by demanding that it be used to forcefully put down any violent actions against the occupiers.

Such a request would have a better chance of being honored if the Israelis were providing the necessary good will that should accompany any negotiations. Since the talks began, Israeli settlement activities have continued, there has been an escalation of radical Jewish presence at Al-Aqsa Mosque and Israel is even turning back American peace volunteers. These acts make the willingness of the Palestinian leadership to press its security forces to be brutal with their own people that much more difficult.

If there is a way to stop the possibility of a resurgence of anger, it lies in reaching an agreement that can end 46 years of occupation and colonial settlement. Anything short of that could delay, but not stop, an eventual outbreak of violence.