When the wave of Palestinian violence broke out, most of the assailants were youngsters who believed that their acts would bring closer Palestinian statehood; but recent attacks seem motivated largely by religious beliefs. 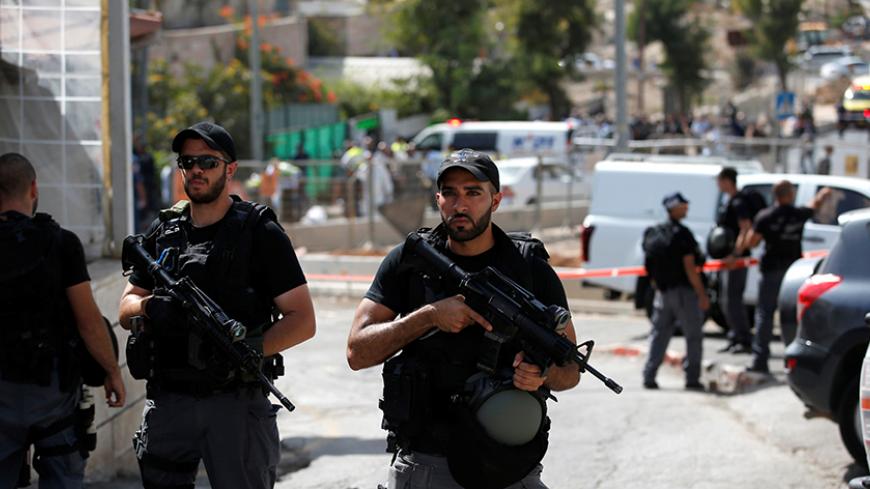 Israeli riot policemen secure the area following a shooting incident in what an Israeli police representative described as a terrorist attack, in Sheikh Jarrah in East Jerusalem, Oct. 9, 2016. - REUTERS/Ronen Zvulun

First Sgt. Yosef Kirma and Levana Malichi were murdered in the Oct. 9 shooting attack in Jerusalem, and six additional people were wounded. The perpetrator of the attack was well known by East Jerusalem residents as a prominent, assertive activist at Al-Aqsa Mosque. A week before the bloody attack, the Palestinian Ma’an News Agency had interviewed him by phone, at which time he spoke about his deeds and encounters with the “Zionist enemy.” The would-be assailant said that he was preparing to serve four months in an Israeli prison for attacking a policeman.

He had also been summoned for trial after being accused of incitement. In a December 2015 Facebook post, he wrote, “There are men who will redeem Al-Aqsa with their blood. Those Jerusalem youths who take part in the intifada — we should kiss the ground on which they tread. They are like lions fighting for their territory.” The assailant matches the profile of a Palestinian fueled by religious, Islamic fervor, who perpetrates terror attacks against Israelis.

The wave of terror that erupted in October 2015 began against a backdrop of clashes on the Temple Mount (the Haram al-Sharif to Muslims) and incitement on social networks. There were numerous posts on social media claiming that Israel was planning to change the status quo there — including restricting prayer times at Al-Aqsa Mosque to accommodate visits by Jews to the Temple Mount — and that right-wing Jewish activists were planning an attack on the mosque. It was against this background that Israel outlawed the Northern Branch of the Islamic Movement, led by Sheikh Raed Salah. The Israelis hoped that this would halt the incitement surrounding Al-Aqsa. Regardless of whether there is a connection, over the course of subsequent months it did not seem that Al-Aqsa served as the primary motive for Palestinian attacks on Israelis.

Most of the Palestinians involved in the recent wave of attacks on Israelis left behind a “last will and testament” with religious messages invoking shahada (martyrdom) as a sacred value. Nevertheless, the members of Israel’s security services and those of the Palestinian security apparatuses argue that most of these attackers did not act out of religious zeal. Rather, they say, these youths were not devout Muslims — sometimes were even viewed as “half secular” — but had been motivated to kill out of desperation. They often believed that their actions would hasten the establishment of an independent Palestinian state and ensure their family members and peers a better future.

One example is the case of Rasha Ahmad Hamed Uweisseh, a Palestinian who was shot and killed by Israel Defense Forces soldiers when she tried to perpetrate a stabbing attack at the Eliyahu crossing on Nov. 9, 2015. A suicide note that she carried read, “I am doing this with a clear head. To defend the homeland and the youth. I cannot stand what I am seeing, and I cannot suffer anymore. To my parents and siblings, forgive me for what I am going to do.”

Most of the attackers in the current wave of terror acted out of similar motives of despair and lack of hope for change in the foreseeable future. In a conversation with Al-Monitor, however, a Palestinian security source claimed that a conspicuous trend had recently been noted of devoutly religious Palestinians viewing the conflict as a religious one, rather than national. The source, speaking on condition of anonymity, noted that there were sometimes a “combination of objectives,” but what mainly fueled recent perpetrators to embark on terror attacks was the belief that they were operating in the name of Allah, who had commanded them to fight the Jews and save Jerusalem and Al-Aqsa. Many sources in the Israeli security system share this opinion. This is how the Jerusalem assailant acted.

Two days before he armed himself with an M-16 and went on his meticulously planned shooting attack, he had published a post on Facebook full of love and longing for Al-Aqsa, where he had served as a Morabitoun. He vowed, “I will not miss anyone as much as I long for you. I do not love anyone as much as I love you. They told me, You will serve four months in prison, for this love of mine. I said, That is too little. My life, my money, and all that I have, I give for you. … My soul, my eyes, my heart are always with you … till death.”

According to the Palestinian security source, “The phenomenon of youths acting alone has almost disappeared. We are left with religious perpetrators, and that’s a different story altogether, one that mandates completely different types of deployment, surveillance and follow-up.”

When asked if he felt there might be a way of obtaining advance warnings about this type of “Al-Aqsa Mosque terror,” the source responded, “The first step is to maintain peace and quiet and the status quo in al-Quds [Jerusalem]. But even that doesn’t guarantee anything because unrest already exists on the ground, and religious faith and belief are stronger than anything else.”

One of the reasons that Palestinian youths are becoming more religious and devout in the West Bank and East Jerusalem neighborhoods is economic distress. This impels them to find solace in mosques, and there they are drawn to the strong religious belief that they must act to defend the holy places in Jerusalem, even if it requires that they “die as martyrs."

Senior Israeli security officers estimate that this religious strengthening is connected to the worldwide phenomenon of exposure to Islamic State ideology via social networks. They also think that it is linked to a truism regarding finances and faith: People tend to become more religiously devout as their economic situation deteriorates.

The main concern is not Palestinian youths' religious faith per se, but their consumption of the messages of radical Islam for which they are prepared to give up their lives. At the moment, the Israeli security services have no way to fight them or create a deterrence other than keeping close tabs on Facebook accounts.