Are the Palestinian assaults on Israelis lone wolf attacks?

Palestinians largely support the latest spate of attacks on Israelis, which they see as retaliation for Israel’s attempted desecration of Al-Asqa Mosque and the occupation. 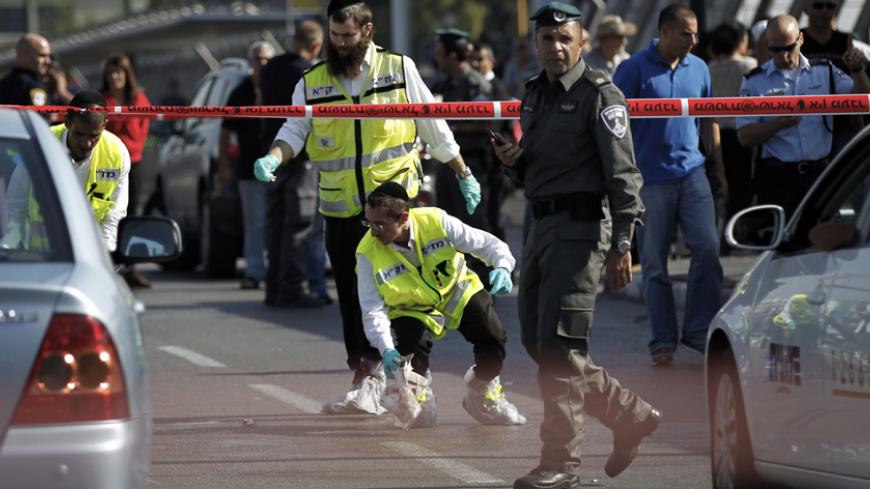 Members of the Israeli Zaka emergency response team work at the scene of a stabbing in Tel Aviv, Nov. 10, 2014. - REUTERS/Finbarr O'Reilly

RAMALLAH, West Bank — Security has become top priority in Jerusalem, with intensifying confrontations between the Palestinians and Israeli authorities, which have turned the city into a military barracks and paved the way for settlers to invade the Al-Aqsa Mosque compound.

The repercussions of Israel’s measures resounded on the ground, as confrontations in the city simulated an “intifada.” The situation is on the verge of eruption if Israel’s tough measures persist in the city.

In the past few weeks, several separate attacks against Israeli targets have taken place. Two separate incidents occurred Nov. 10: an 18-year-old boy from the city of Nablus stabbed and killed a soldier in Tel Aviv, while a vehicular assault and stabbing occurred near the settlement of Etzion, north of Hebron, during which the young male perpetrator and a settler woman died.

On Aug. 4, a bulldozer driven by Mohammad al-Jaabis hit an Israeli bus and killed a settler. On Oct. 22 a car driven by Abdelrahman al-Shaludi slammed into a bus shelter in the neighborhood of Sheikh Jarrah, killing one man and a female settler. Three days later, an Israeli settler ran over and killed 5-year-old Inas Dar Al-khalil near Ramallah.

The attacks came to a head on Oct. 29 with the assassination attempt on radical Rabbi Yehuda Glick, who spearheaded the settlers’ raids at Al-Aqsa, and the death of the young man Motaz Hijazi, whom Israel accused of trying to kill Glick. This pushed the occupation authorities to shut down Al-Aqsa to worshipers. Shortly after, Ibrahim al-Akkari ran over a settler in Sheikh Jarrah on Nov. 5.

The families of Shaludi and Jaabis denied that their sons had run over the settlers intentionally.

Jaabis’ father told Al-Monitor, “My son worked as a bulldozer driver and did not deliberately kill the settler. It was an unintentional accident.” Shaludi’s mother told Al-Monitor, “My son was in a bad psychological state after his release from the occupation’s prisons, where he had stayed for a year and a half. The house was raided, and he was arrested and tortured physically and psychologically, which affected him. What happened was a road accident.”

Akkari’s wife issued statements saying that her husband reacted to the settlers’ and the Israeli forces’ daily attacks at Al-Aqsa. The families are afraid that Israeli forces will destroy their houses in response.

Chairman of the Palestinian Academic Society for the Study of International Affairs (PASSIA) Mahdi Abdul Hadi told Al-Monitor, “The security issue is a priority in Jerusalem, which has become once again a city under military occupation, as it was in 1967.”

Regarding the motives that may push young people to carry out such attacks, Abdul Hadi said, “The youth movement has a growing national pride that is not subject to any national leadership. The youth are facing Israeli measures that target Palestinian houses, impose taxes, champion the Israeli side of the story and attempt to Israelize the city.”

The governor of Jerusalem, Adnan al-Husayni, told Al-Monitor, “Israel has created an internal revolution in the Jerusalem’s youth due to its measures, and this revolution appears in different forms.”

Husayni asserted that Israeli pressure is sparking tensions and violence, especially since the religious beliefs of Jerusalemites are being targeted, and those cannot be restrained or subject to standards. “When a person’s credo is touched, he would do anything. Israel is driving the region to increasing tensions,” he said.

Israeli security researcher Fadi Nahas told Al-Monitor, “The individual acts are confusing Israel on both security and political levels, but they do not affect its national security. They are characterized by the fact that they do not need cover from institutions. Besides, individual acts, especially in Jerusalem, which is filled with Israeli security cameras and intelligence, are easier and more successful.”

Nahas noted that the individual acts are motivated by various factors, including ideological, national and religious ones. Palestinians suffered the Israeli aggression on Gaza, and they are angered by the attacks on Al-Aqsa, which have not prompted any official Palestinian response.

Nahas said, “The current situation in Jerusalem and the Palestinian cities in the 1948 territories are similar to the situation before the outbreak of the Al-Aqsa intifada in 2000.” The young people have much greater feelings of defiance and anger than political parties, which will be reflected individually in the streets.

In the past two days, clashes erupted between Palestinians and Israeli police in the 1948 territories, following the death of a young man in the town of Kafr Kana on Nov. 7.

On Nov. 9, Israeli police said that Palestinians had put up signs in Nazareth encouraging vehicular attacks on Israelis, while Israeli police placed concrete blocks in front of bus stations in Acre, fearing such attacks.

Abdul Hadi said what was happening falls within the context of a “spontaneous and individual youth movement, which has not been taken over by any political or religious faction, and which faces numerous challenges.”

For his part, Husayni said Jerusalemites made up their minds and will handle things their way.

“The continuous attack on national and religious sentiments will create new situations and conditions that are difficult to contain,” he said.

The car attacks in Jerusalem have received public support, especially in light of the attacks against Al-Aqsa.

Mohammed Barghouti, an accountant, told Al-Monitor, “After everyone gave up on defending Al-Aqsa, young people are assuming this mission in Jerusalem by all means available, and individual acts are one of these means.” Fadi al-Shalabi, a teacher in Ramallah, also told Al-Monitor, “These operations are an individual reaction to the desecration and attacks on Al-Aqsa.”

Hamas and Islamic Jihad praised the run-overs in Jerusalem, considering them a natural reaction to the aggression against Al-Aqsa and Jerusalem.

Palestinians expressed their feelings, whether by designing posters, launching Facebook pages, using hashtags and even through songs.

Social media activists opened the Facebook page called Da’es (a play on the Arabic word for “run-over,” since Daesh in Arabic refers to the Islamic State) to express their support for these operations, falling within the scope of resistance acts.

Social media observer Mahmoud Haribat told Al-Monitor, “Social media outlets reflect the opinions in the street, and social media users express their feelings through their posts. This is the case for #Da’es,” he said.

In the end, if Israel proceeds with its policy against Palestinians and with the desecration of their sacred symbols and properties, the latter might be pushed to use more means of resistance and defense, which foretells an expanding confrontation.