Israeli-Jordanian ties are likely to deteriorate following an Israeli court decision to close the Bab al-Rahma building inside Al-Aqsa Mosque and to try the Islamic Religious Endowments as a terrorist organization. 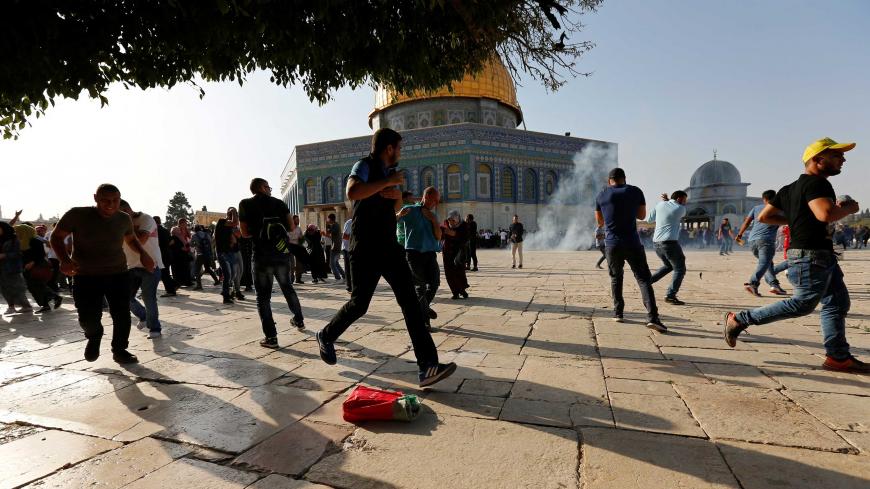 Palestinians react as a stun grenade explodes in the compound known to Muslims as Noble Sanctuary and to Jews as Temple Mount, after Israel removed all security measures it had installed at the site and Palestinians re-entered, Jerusalem's Old City, July 27, 2017. - REUTERS/Muammar Awad

RAMALLAH, West Bank — In a closed meeting Sept. 14, the Jerusalem religious authorities, which consist of four Islamic institutions, warned that measures will be taken in protest against Israel, in case the latter does not retract its decision to close down the Bab al-Rahma building inside Al-Aqsa Mosque and to bring the Islamic Religious Endowments before the Israeli court, considering it to be a terrorist organization.

Ekrima Sabri, the head of the Supreme Islamic Council in Jerusalem, told Al-Monitor, “Israel is deliberately taking retaliatory measures against Jerusalemites and Islamic Religious Endowments. The Israeli court decision consists of an encroachment upon the religious endowments’ powers, given that it is not entitled to issue any decision that has anything to do with Al-Aqsa.”

On the possibility of mobilizing worshippers and Jerusalemites at the entrances of Al-Aqsa, Sabri said, “Everything is possible. The religious authorities decided Sept. 14 that there will be measures in protest against such a decision, in case the occupation authorities did not retract their decision. Yet these measures will be determined in time. There is consensus on the need that the Bab al-Rahma building be opened and that prayers be held inside it, as it is a part of Al-Aqsa Mosque.”

Upon the recommendation of the Israeli police to permanently close the building, the Israeli Magistrates Court in Jerusalem renewed Aug. 30 the decision to close down until further notice the Bab al-Rahma building inside Al-Aqsa Mosque, which includes several offices and was initially closed down in 2003.

The court also ordered that the Islamic Religious Endowments (Waqf) in Jerusalem, which is in charge of managing Al-Aqsa Mosque and is affiliated with the Jordanian Ministry of Awqaf, Islamic Affairs and Holy Places, to appear in court, considering it to be a terrorist organization.

The Bab al-Rahma building dates back to the Umayyad period. It is a complex that includes several facilities and offices, including the offices of the defunct Islamic Heritage Committee that operated from 1992 until 2003, when the committee was dissolved and the building was shut down by Israel.

Israel seems to be seeking revenge on the Islamic Religious Endowments, which played a significant role in mobilizing the Mourabitoun in front of Al-Aqsa’s gate during the crisis on July 14-27. Eventually, Israel caved in to the Palestinians’ demands and removed the electronic gates and surveillance cameras.

Jordan has been the official custodian of the holy sites in Jerusalem since Palestinian and Arab officials swore allegiance to Hussein ibn Ali al-Hashimi in 1924. The custodianship continued with the passage of time, and it was renewed when Palestinian President Mahmoud Abbas and Jordanian King Abdullah II signed an agreement on March 31, 2013, reaffirming Jordan’s custodianship over the holy sites in Jerusalem.

The Israeli decision is likely to further deteriorate the already tense relations between Jordan and Israel, caused by the Israeli measures during the Al-Aqsa crisis and the killing of two Jordanian citizens by a security man at the Israeli Embassy in Amman.

In a press statement issued Sept. 12, the Jordanian government condemned the Israeli decision to close the Bab al-Rahma building.

Mohammad al-Momani, the minister of state for media affairs and spokesman for the Jordanian government, told Al-Monitor, “The Israeli judiciary has no jurisdictions over the holy sites in East Jerusalem, as the area in an occupied territory subject to the provision of the international law and the international humanitarian law. Ordering the Islamic Endowments to appear before the court based on the counterterrorism law is a very dangerous step that does not bode well, and will have dire consequences.”

Keswani said, “Israel’s decision comes as revenge, because it failed to establish electronic gates at Al-Aqsa’s entrance. The Islamic Endowments are updating the Jordanian Foreign Ministry and the Ministry of Awqaf, Islamic Affairs and Holy Sites on the situation, to be able to galvanize political and diplomatic efforts to stop the encroachment at Al-Aqsa and the Israeli sovereignty over the mosque.”

The trial of Islamic Religious Endowments will be a challenge to the four religious authorities in Jerusalem: the Supreme Islamic Council, Dar al-Ifta, Islamic Religious Endowments, which is responsible for the management of Al-Aqsa, and the Endowments and Islamic Affairs Council. These bodies have to take action as they have previously done when they mobilized the Mourabitoun in front of Al-Aqsa entrances in July.

Following the Israeli decision, religious authorities intensified meetings and issued a statement on Sept. 7 reiterating their objection that the Islamic Religious Endowments appear before the court. Furthermore, they called on the Israeli authorities to abide by the status quo that has been ongoing since 1967. According to Sabri, another meeting by these authorities was held Sept. 14 in Jerusalem.

Chances of increased tensions on the ground are more likely in Jerusalem if the religious endowments or religious authorities ask for it. There could be clashes between the Jerusalemites and Israeli forces or the mobilization of worshippers and protesters at Al-Aqsa entrances.

The Israeli decision may pave the way for the prosecution of the other Islamic councils in Jerusalem. Sabri added, “Everything is possible, because the occupation takes retaliatory decisions and wants to prove itself as being the one that has sovereignty over Al-Aqsa.”

In light of the Israeli decision, the Palestinian Authority does not seem to be adopting any stance exceeding the mere condemnation of the decision or going beyond the calls that the international institutions pressure Israel to back down on its decision. This is not to mention the coordinated stances with Jordan, the custodian of Al-Aqsa, through the joint crisis committee that was formed on the sidelines of the Aug. 7 meeting between Abbas and Abdullah in Ramallah.

The Palestinian Ministry of Foreign Affairs said in a Sept. 10 statement, “The Israeli police decision will have calamitous repercussions on the conflict, requiring that the Organization of Islamic Cooperation promptly and vigorously demand that the member states commit to an action plan based on cutting ties with Israel.”

Adnan al-Husayni, the governor of Jerusalem, told Al-Monitor, “Israel continues its encroachment on Al-Aqsa Mosque, giving no attention to the Arab, Islamic and international position. Yet it needs to know that its ongoing attempts to impose its sovereignty over Al-Aqsa will result in a major religious conflict, which is extremely dangerous.”

In light of the Israeli decision to close the Bab al-Rahma building and to bring the Islamic Religious Endowments before the court, the situation is more likely to escalate and explode in Jerusalem, particularly since the city's history points to the many uprisings and confrontations every time Israel tries to exert control over Al-Aqsa or violate its sovereignty.