Israel expands its surveillance of Al-Aqsa Mosque. This is in defiance of the Jerusalem Islamic Waqf, which claims the surveillance is a violation of sovereignty. 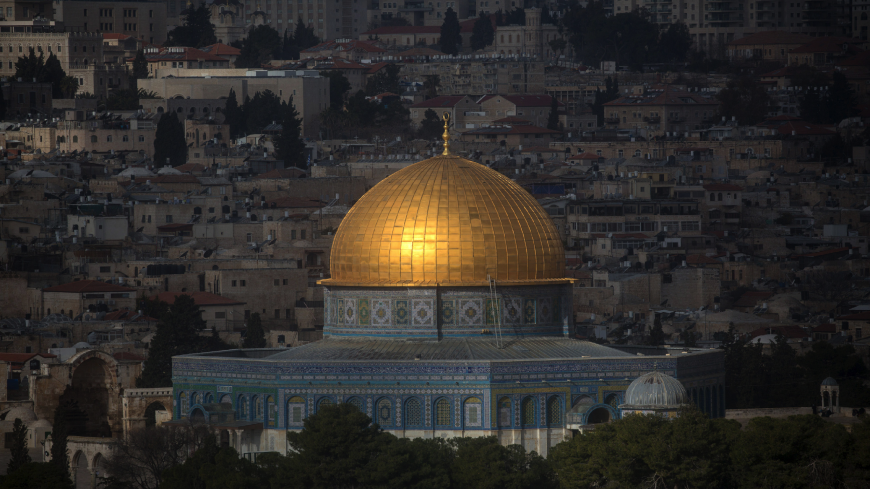 The Dome of the Rock at the Al-Aqsa Mosque compound is seen from the Mount of Olives on Jan. 13, 2017, in Jerusalem. - Chris McGrath/Getty Images

RAMALLAH, West Bank — Tension is ongoing at Al-Aqsa Mosque, with daily raids by settlers and Israeli police and what is seen as an increasing attempt by Israeli authorities to bring about changes in the mosque and undermine the sovereignty of the Jerusalem Islamic Waqf (religious endowment). It is also seen as an attempt to undermine the Jordanian guardianship of Jerusalem’s holy sites and impose Israeli sovereignty.

On Sept. 6, Israeli police set up ladders at the entrance and minaret of Bab al-Asbat Gate and mounted them to install huge loudspeakers on the northwestern wall of Al-Aqsa Mosque. The devices were placed on the roof of Al-Aqsa High School adjacent to the Bab al-Asbat minaret and on the roof of the Islamic School for Girls adjacent to Al-Silsila Gate. Two devices were placed on Bab al-Hadid.

Mohammed al-Ashhab, director of public relations and media at the Jerusalem Islamic Waqf, told Al-Monitor the Waqf had earlier rejected a request by Israeli police to open the door to the Bab al-Asbat minaret to cross from it to the roof of the northern Al-Aqsa Mosque wall and install loudspeakers. After the refusal, he explained, the police used ladders to reach the roof and forcibly installed them.

Ashhab said four loudspeakers have been installed on the northern and western walls of the mosque, which are supplementary devices for surveillance cameras and sensors that police have installed there over the past years in order to monitor the worshippers, noting that Jordan is now associated with this new violation by virtue of its guardianship over the mosque.

Jordan has the right of guardianship over the Islamic and Christian holy sites in Jerusalem, according to the Palestinian pledge of allegiance to Sharif Hussein bin Ali on March 11, 1924, which continued until after the West Bank joined Jordan following the 1948 Arab-Israeli war, as Jordan was the last local authority to oversee those sanctities before Israel occupied them in 1967. The pledge remained in force as stipulated in the Jordanian-Israeli peace treaty signed in 1994, until President Mahmoud Abbas signed the guardianship and sovereignty agreement with King Abdullah II on March 31, 2013.

Ashhab said Israel is committing various violations against Al-Aqsa such as daily raids and pursuing Waqf employees and dismissing them from the mosque. Nearly 30 dismissals have been recorded against mosque guards since the beginning of 2020, in addition to preventing Islamic Waqf restoration projects inside Al-Aqsa — all of which were committed with the purpose of changing the historical and legal status of the mosque.

In August 2017, Israel installed loudspeakers for the first time on the roof of the Omariyeh College near the Bab al-Ghawanima minaret after the Bab al-Asbat protests, which became known as the battle against electronic gates. The addition of even more loudspeakers allows Israeli authorities to disturb worshippers during prayer and give instructions during any confrontation or incident at the mosque without necessarily coordinating with the Islamic Waqf.

Ekrima Sabri, head of the Supreme Islamic Council in Jerusalem, told Al-Monitor Israel is intensifying its monitoring tools against Al-Aqsa worshippers in order to change the current status quo of the mosque.

The Islamic Waqf issued a statement Sept. 6 noting that “the occupation's attempt to change the historical, religious and legal reality in Al-Aqsa by force will never succeed.” The statement continued, “Police plans in support of extremists and transgressions that want to undermine the Waqf and its employees will be destroyed by the steadfastness of the people of the city and the Mourabitoun (self-appointed guardians of Al-Aqsa),” appealing to Jordanian King Abdullah II personally to intervene quickly to “curb the occupation policies and eliminate its measures that it is trying to impose by force.”

Jordanian Minister of Awqaf Mohammed Ahmed Al-Khalayleh issued a press statement the same day warning against “the repeated attacks by the occupation authorities against the employees of the Islamic Waqf, who are constantly summoned for investigation and then arrested or dismissed from their worksites in the mosque,” stressing that the Islamic Waqf in Jerusalem is the only body with exclusive authority to manage mosque affairs.

Israeli authorities have escalated their measures at Al-Aqsa Mosque, and such practices are expected to further increase in the coming weeks and months in an attempt to achieve several goals: imposing its sovereignty and administration over the mosque in line with the US recognition of Jerusalem as the capital of Israel, marginalizing the power and decision of the Islamic Waqf, and undermining and weakening the Jordanian guardianship because of Jordan's position rejecting the US Mideast peace plan and the annexation plan, specifically the annexation of the Jordan Valley.

A senior official in the Islamic Waqf in charge of Al-Aqsa Mosque affairs told Al-Monitor on condition of anonymity that Israel forcibly installing loudspeakers on Al-Aqsa’s wall after the Islamic Waqf refused the request to do so is part of its campaign to impose sovereignty and administration over Al-Aqsa.

He said Israel is seeking to change three aspects of Al-Aqsa Mosque. The first is to change the historical reality so that it can overstep the powers of the Jordanian guardianship and infringe upon it by violating the powers of the Islamic Waqf, which is a representative of the Hashemite Kingdom of Jordan. He noted that it is doing so through raids, police measures, preventing projects in the mosque, and setting up sensors and surveillance cameras without the Waqf’s consent.

The second aspect is the human conflict at Al-Aqsa Mosque, as Israel is working to change and dry up the Arab and Islamic human presence in the mosque, expel the Palestinian Jerusalemite presence, and attract settlers and a military presence inside the mosque through dozens of dismissal notices and incessant raids, be it against mosque guards or Mourabitoun.

The third aspect, he added, is Israel’s endgame, which is to turn Al-Aqsa Mosque into a place similar to the Ibrahimi Mosque in Hebron. The official explained, “When Israel installs loudspeakers around the mosque and imposes its security control over it, the Palestinian presence in the Old City [of Jerusalem] dries up, as it controls all aspects of the mosque and prepares to implement temporal and spatial division of the mosque and control it completely.”

Israel continues to bring about changes to Al-Aqsa, and it does not seem to be facing any pressure to stop. It is armed with the US decision recognizing Jerusalem as the capital of Israel and more recently the two normalization agreements with the United Arab Emirates and Bahrain, all of which encourage it to proceed with implementing its plan for the temporal and spatial division of the mosque.