Is Israel violating the Geneva Convention?

In light of the recent security escalation in Jerusalem, Israel has resumed its house demolition policy, violating international law. 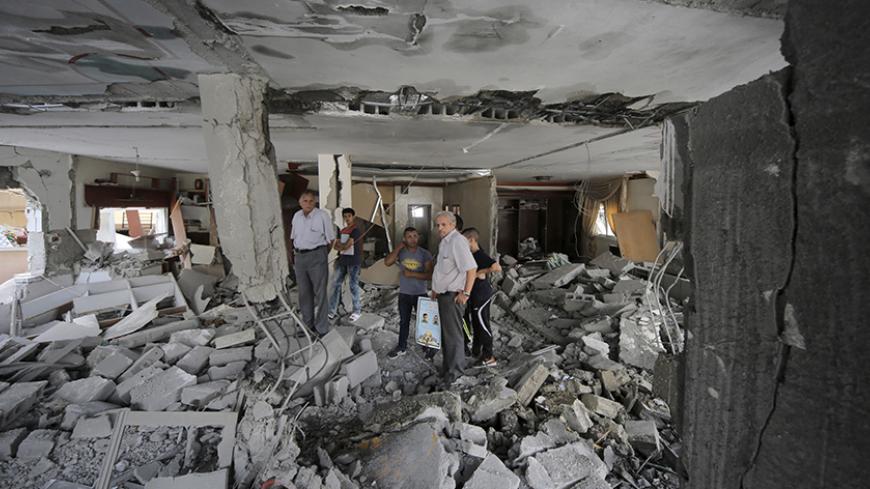 Palestinians stand in the razed home of a Palestinian militant in Jabel Mukaber, in an area of the West Bank that Israel captured in the 1967 war and annexed to the city of Jerusalem, Oct. 6, 2015. - REUTERS/Ammar Awad

The Israeli government decided Oct. 13 to speed up demolition of the houses of Palestinians it holds responsible for stabbing attacks. It also has approved other penalties that include not releasing the bodies of the Palestinians who were killed to their families and withdrawing Israeli citizenship from these families in East Jerusalem and the 1948 territories.

Israel has continued to withhold, since Oct. 1, the bodies of seven dead from Jerusalem.

On the morning of Oct. 15, Israeli forces sent demolition warnings to the families of prisoners Karam al-Masri and Yahya Haj from Nablus, accused of killing a settler and his wife near the Itamar settlement Oct. 1. Warnings were also sent to the families of Moaz Hamed and Abdullah Hamed from Silwad in Ramallah, both prisoners of the Palestinian Authority and accused by Israel of belonging to a military cell that killed a soldier and injured three settlers in Shafout Raheel settlement near Nablus.

Israel has pursued this policy of destruction since the occupation of the West Bank and the Gaza Strip in 1967, with temporary lapses. Most recently, it resumed the tactic in 2014, after a four-year halt.

According to B'Tselem - the Israeli Information Center for Human Rights in the Occupied Territories, the Israeli army returned to demolishing houses in June 2014 after three Israeli settlers were kidnapped in Hebron that same month. The army then demolished four houses and closed one house in the West Bank and Jerusalem. Between October 2001 and January 2005, Israel demolished about 664 houses in the West Bank and Jerusalem, according to a B'Tselem report published in June 2014.

These actions, and others, amount to collective punishment of the victims’ families, which violates international law provisions.

Hanna Issa, an international law professor at Birzeit University, told Al-Monitor that Israel’s demolition of Palestinian houses violates the provisions of Article 33 of the Fourth Geneva Convention of 1949, which states, “No protected person may be punished for an offence he or she has not personally committed.” These acts also violate the provisions of Article 53 of the same convention, which prohibits the destruction of fixed or movable property, and Article 17 of the Universal Declaration of Human Rights of 1948, which states, “No one shall be arbitrarily deprived of his property.” He said Israel also is flouting a UN Security Council Resolution from 2004.

Issa said Israel is demolishing houses based on the British Emergency Law of 1945, which was canceled with the termination of the British Mandate for Palestine.

In the Ramallah governorate, Muhannad Halabi's family lives in a state of anxiety, fearing the Israeli army will raze their house. Israel says Halabi was involved in a stabbing and shooting Oct. 3 in Jerusalem. Police shot and killed him.

On Oct. 15, the Israeli army sent a demolition warning to Halabi's relatives and raided the house, which they had evacuated as a precaution. The army already had invaded the house Oct. 5, along with a bombing engineering unit. Halabi’s father said they were told the house would be destroyed soon. "They took measurements and placed signs indicating their intention to demolish the house,” he told Al-Monitor.

The Israeli army also stormed the house of prisoner Noureddine Abu Hashieh from the Askar refugee camp, east of Nablus, on Oct. 3. Abu Hashieh was accused by Israel of a stabbing in Tel Aviv. The family was handed a demolition warning, which has yet to be implemented.

Abdel-Rahman al-Shaludi, who was accused of running someone over in Jerusalem in 2014, was killed by Israeli police there. The family house was bombed by the Israeli army in al-Bustan neighborhood in the town of Silwan on Nov. 19, 2014.

Shaludi’s mother recalled in an interview with Al-Monitor the moment her house was bombed. “They broke into our house at midnight and expelled us from the house, along with [other] residents of the building. We were about 70 people and we stayed in the street in the rain until 4 a.m., when we heard the house blow up.” She added, “The occupation forces have prevented us from rebuilding or going to the destroyed house. We are seven people and we are homeless now. Sometimes we sleep at our brother-in-law’s old house in Jerusalem, while other times we are forced to stay for days at my sister's house in Kafr Aqab in Jerusalem, or at my father’s in Beit Hanina.”

Human Rights Watch said in November 2014 that the Israeli government’s demolition of Palestinian houses whose owners are accused of carrying out suicide bombings amounts to “collective punishment and a potential war crime that deliberately and unlawfully punishes people not accused of any wrongdoing.”

Sahar Francis, director of al-Dameer Association for Human Rights, seconds that assessment. “The demolition of houses amounts to a collective punishment inflicted upon the family members of a person accused by Israel of implementing suicide bombing operations. This violates the Fourth Geneva Convention,” she told Al-Monitor. “Israel is using the security conditions as a pretext to impose its house demolition policy."

For his part, Fadi Nahas, a researcher in Israeli army affairs and Israeli national security at the Palestinian Forum for Israeli Studies, told Al-Monitor, “Israel is not following any law by demolishing Palestinian houses, and it always deals with the West Bank and Jerusalem as areas under military occupation. The Israeli judiciary yields to the military establishment.”

He added, “All of the judicial bodies in Israel yield to the whims of the military establishment, which takes whatever punitive decisions it wants to take with the approval of the government. It resorts to the policy of house demolitions to deter the Palestinian people without worrying about any humanitarian or international laws.”